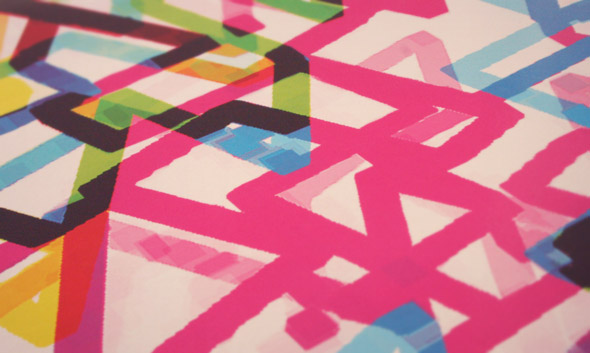 Factory Floor is a fitting name. It calls to mind the rusty grates in the basement sex club of Berghain, the metallic killing floors of slaughterhouses and the sneaker-scuffed concrete of assembly line stations. Just as ‘industrial music’ evokes a very clear idea of abrasive repetition, the London three-piece’s name evokes their whirling amalgamation of drone, ambient and experimental techno.

The link to industrialism goes beyond the name. Factory Floor’s combined practice space and living quarters happens to be a warehouse next to a clothing manufacturing plant. Drummer Gabriel Gurnsey admits that the group wakes up “to the sound of the sewing machines next door going on repeat”, and guitarist Nik Void formerly worked a night shift at a chocolate factory. They’re outspoken about making music with an “uncomplicated order” and frequently touch on the importance of minimal instrumentation, uncrowded instruments playing their parts. Their production ethic seems largely informed by the mechanical, orderly, churning wheels of industry, citing the Detroit techno scene’s bare bones use of a drum machine and 303 as inspirational.

Despite all these connections, an ‘industrial’ tag seems too restrictive for the group, especially in the case of “Fall Back”, the first single from their forthcoming debut LP proper. Both immediately assaulting and technically uncomplicated, it plunges immediately into throbbing arpeggio and a steady time-keeping kick drum, while a rigid military percussion pattern ricochets overtop. A minimal techno structure is present throughout, a sustained rhythm with small peaks and drops emerging. However, it’s anything but restrained; as Void’s dehydrated, pitched down vocals join the mix, a growing sense of momentum rises with each repetition of the spine-snappingly precise percussion pattern. Void’s lyrics throughout seem to directly ask the listener questions about human emotion and physicality. When she drones, “did it feel like you were going to… fall on the ground?” it sounds as if wrapping her head around human emotion is a struggle.

As a group of experienced improvisers, the feeling of a freeform practice suddenly clicking into sync is palatable through much of Factory Floor’s catalogue. One of their biggest accomplishments on “Fall Back” is the way that the uncompromising rigidity of the drums eventually meshes with the effervescent, ghostly vocals. The merger happens slowly and gradually, and it’s almost unnoticeable until you realize that the disjointed, off-kilter sounds presented at the beginning have gelled cohesively into a pulsating hypnotic drone. No matter what gets thrown at you in the second half of the track (mutated bell gongs, queasy bass squelches, out-of-key keyboard plunks and more), it still remains danceable, having discovered the structure and rhythm layered underneath.

Looking at it from another angle: Gus Visco once wrote a short story called The Complexities of the Human Sitcom that described a future in which humans suddenly and inexplicably vanish, leaving behind only super-advanced computers. In the absence of humans, these computers spent their time formulating ideas for new sitcoms based on a variety of criteria that they expected humans to love, imagining that when Earth’s population did return, they’d want to watch all their favourite shows. But over time, the sitcom ideas generated by the computers slowly start to become more surreal and nightmarish. After several seasons, TV networks are filled with programs of “disembodied eyeballs rolling around a strange labyrinth of staircases, dead ends, and shifting gravity fields.” The computers predict that when the humans come back, they’ll be very pleased by the sitcoms indeed.

Both Visco’s story and “Fall Back” are about the way things can degenerate and regroup into something else unknowingly. For Visco, what begins as a shared pop culture communicability (the sitcom) slowly disintegrates into alienating terror. “Fall Back” achieves the opposite, fusing disparate elements together organically like an infant moulding an octopus out of silly putty. What begins as shapeless and formless is transformed into communicable dance floor logic, an equation that begins with noise and the discomforting squalls of Nik Void, and ends with a commanding, body moving hypnotic rhythm. Instead of highlighting alienation in the industrial world, “Fall Back” is the experience of slowly starting to understand and communicate through mechanical logic, with something intensely human happening in between.