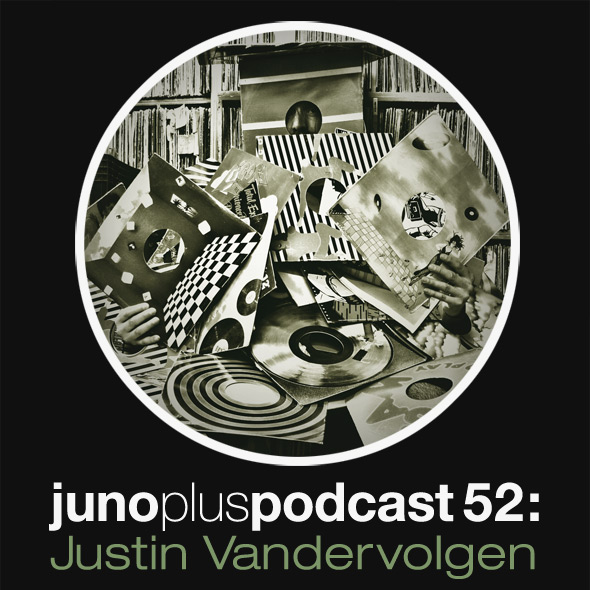 One of New York City’s finest in Justin Vandervolgen helms our latest podcast.

Brooklyn resident Vandervolgen is one of those DJs and producers who seem synonymous with New York City, brandishing a stellar discography that holds credits for labels such as Golf Channel, DFA, Throne Of Blood, Eric Duncan’s Keep It Cheap and ESP Institute. There’s always something special about the end product of a Vandervolgen studio session, be it his Try To Find Me releases for Phil South’s perennially on point Golf Channel, his work as TBD alongside long time compadre Lee Douglas or the numerous remixes and edits that have appeared intermittently over the years – last year’s Soft Rocks effort being a strong favourite in the Juno Plus office.

No doubt informed by his tutelage in the iconic late-nineties disco punk acts Out Hud and !!!, there’s always been a rough and deadly feel to a production from Justin Vandervolgen; his brutally primal and propulsive 2010 Golf Channel production “Clapping Song” or the deranged thump of TBD’s DFA 12″ Oh My. It’s releases like these that ensure anyone who dismisses Vandervolgen as merely “another disco edit producer” should do so at their peril. There’s evidently a wide knowledge and understanding of dance music that shines through in his output, and translates to his DJ sets with his mix for our podcast series peppered with unknown cross genre gems mixed in a seamless fashion.

Next month sees Vandervolgen embark on a mini tour of Europe (dates at the bottom) amid whispers of him starting a new label; Justin was kind enough to chat about this and more in answers to some questions we jettisoned across the Atlantic.

Hello Justin, what have you been up to lately?

Hi, just been working on music, DJing and travelling some.

Thanks for doing this mix, where was it recorded and what can we expect?

It was recorded live one take in my studio. I have all the equipment to record a DJ set up but I don’t really have a space to leave stuff set up so I put together a makeshift area and put the mixer and two CDJs on a guitar case on top of a keyboard stand. Then I put the one working turntable I have on top of a wood box and put that box on top of a stool.  It was kinda sketch but worked out.

Is this pretty indicative of what we’d expect to hear from you in a club?

Yeah more or less I think, depending on the situation

I’ve always wondered what TBD, your production project with Lee Douglas, stands for. Can you reveal it?

I think that in the UK and Europe you say TBA, or “to be announced”, in America we write TBD on flyers and stuff when you don’t know what it’s gonna be. It means “to be determined” or in this case it could mean Doug and Justin couldn’t come up with a name and had to put something on their first record so they went with this one

You are heading to Europe next month for a chunk of dates – where you looking forward to playing most?

I’m excited for them all, will be nice to see friends I haven’t seen for a while and meet some new people, have a drink, have some food, I like those UK style beers with no bubbles from the pump, I’m psyched to have some of those!

Lee’s in Berlin now right? Do you have plans to jam out any new TBD material?

Yeah he moved there but has been there less than a month so I don’t think he has his studio set up yet, but maybe….

Do you have any other upcoming projects you can chat about?

Right now just focusing on my own stuff and setting up my label, there is also a project I did with Eric Duncan, Aaron Bondaroff, Pete Z and Johnny Sender from Konk that I’d really like to finish at some point

You’ve toured Europe quite a bit now, is there a discernible difference between audiences here and in NYC?

Nah not really, I think every audience is a little bit different from each other, just kinda depends on the night.

New York seems to be buzzing right now with various little labels doing their own thing – LIES, Mr Saturday Night, Lets Play House, WT Records – is this having a positive effect on clubs there?

Can’t say I’ve seen any effect on clubs as actual nightclubs are struggling in New York which I think is due to the super high rent and overhead. I have heard though that there are some new ones opening in Brooklyn soon so I guess we will see what their music policy will be and if they can survive. There is always stuff going on here though – recently Jason Drummond (DJ Spun) has been booking the club Santos every other Friday or so and been bringing people to play like Harvey, Eric, Thomas and the Horse Meat Disco guys, those parties are very strong. Mr Saturday Night and Let’s Play House bring people over too. Then there is Verboten, Bunker, Resolute – more kinda techno stuff. I’m sure I’m forgetting others… Yeah, there is a lot going on for dance music, just maybe not always at clubs…..

Where are your favourite spots to go digging for records?

In New York you gotta go to A1!

There are lots that I really like, so I guess I can’t really say. I can say I’ve been playing this track by Billy Preston towards the end recently.