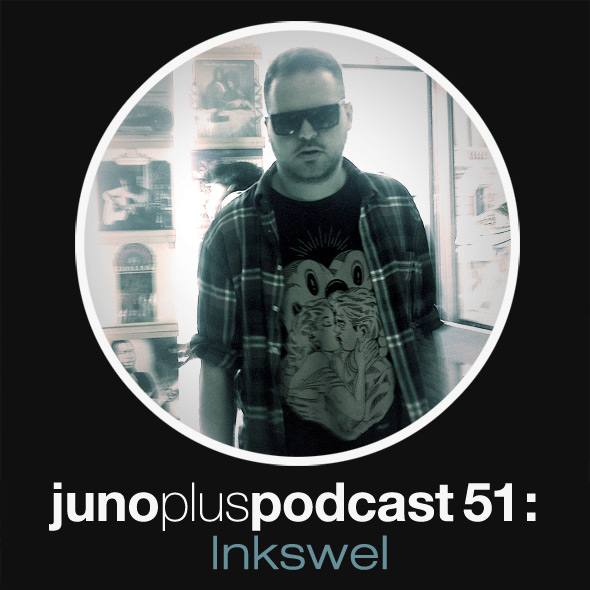 We head south for the first Juno Plus podcast of a new year as Australian producer and DJ Inkswel drops a chunk of unrestricted soulful drum machine music.

Based in Melbourne, the enigmatic Inkswel first came to the fore with a clutch of releases on the Rush Hour offshoot Boogie Bash in 2011 that aligned him with international funkateers like Linkwood, Peoples Potential Unlimited, Tom Noble and his Dutch namesake Trago. Last year’s superb Dopeness Galore transmissionThe Ginseng Root EP made a real impression on the Juno Plus staff, coming across as the most potent display of his style thus far with with “High All The Time” a notable highlight, pairing dusty DMX drums with spectral gospel samples, and the release was a worthy addition to our top 100 12″s of 2012.

A subsequent induction into the Firecracker Hall Of Fame with the fourth Unthank release replete with a killer Funkineven remix demonstrates the high regard Inkswel is held in, and 2013 promises much more from the man. Inkswel has joined forces with compadre and Voyeurhythm artist Freekwency / Benny Badge to found Hot Shot Records, a new label that launches imminently with tracks from each adorning a dinky 7″ with plenty more music planned as the year pans out. Inkswel was kind enough to throw down some answers on the cusp of the New Year to complement a killer mix recorded straight to tape that includes everything from Bakey USTL to Showbiz & AG via Moon B.

Hi Inkswel, thanks for doing this mix. For those unfamiliar with your style how would you describe your approach to making music and your history to date?

Style for me is something that just comes naturally, I’ve never tried to sound a specific way. I try to keep it soulful, do what feels good. Obviously as an artist and fan I’m inspired by many artists and outside inspirations. I use a mix of analog gear and digital, I try and keep things raw and as creative as possible, I never overwork ideas, if it ain’t broke don’t fix it.

Historically I came out of B-Boy/hip hop culture… I used to be strictly beats and rhymes; Breaking, graffiti and all that, but I luckily grew up in a small town that also had a flourishing house music scene with pioneers such as HMC at its helm! One of the game changers for me creatively was being put onto Theo Parrish, Spinna, Carl Craig etc by T Bot who owned the long running B Sharp Records. Big up! I think all of this shaped me musically, gave me the raw approach to things.

Would you say the mix you’ve done for us is pretty indicative of what you’d expect to hear from a Inkswel club set?

I guess the mix is just things I’m feeling, I don’t have a specific approach to DJ sets. I just play soulful music I love!

How was it recorded?

Recorded on 2 turntables and a mixer into a Tascam tape deck.

Melbourne’s had a pretty fruitful deep house scene for the past few years, where do you see yourself fitting in amongst all that?

There is some amazing music coming out of Melbourne and furthermore Australia. But personally I don’t really rep myself by the area I live, I’ve lived all over the world and feel music is universal! Big ups my Adelaide, Melbourne, Brussels, London and Amsterdam families!

Your 12” for the Dopeness Galore label, The Ginseng Root EP, was killer, focusing on the health conscious aspect to it, is this something you personally use? It’s said to have aphrodisiac qualities for example…

Ginseng is a powerful tool! Along with all plants on this wonderful earth, I guess the EP reference is more about internal energy, trying to convey a feeling or energy from the music!

Hot Shot is a new independent label run by me and Freekwency aka Benny Badge pushing more lo-fi raw stuff; I guess we wanted an outlet for the stuff we do that doesn’t fit on other labels, unrestricted soulful drum machine music. The first drop has a cut from me and Reggie B, and Freekwency. Upcoming releases are from Merwyn Sanders, Nite Class, Charli James, Kid Sublime, Boo Shank and The Delicate Genius. The label is lovingly distributed, blessed and pressed by PPU/ Earcave.

Beyond this, what other Inkswel stuff is on the horizon? From your mix I see there’s a Gifted & Blessed remix on a forthcoming Hot Shots cut?

Upcoming from me: Inkswel EP on Faces and MCDE and a track coming out through Rush Hour in 2013, an Earlybirds EP on Dopeness Galore which is me on production and Charli James on vocals, and a Merwyn Sanders and Inkswel EP on Hot Shot. The GB remix is on this EP as well as a remix from Firecracker label buddy Linkwood. And some other things I can’t announce yet!

Gifted and Blessed is certainly an artist that bears similarities in approach to you, less concerned with outright genre and more fixed on a certain feeling. I know there is a pretty comprehensive list of inspirations on your Facebook, but any other contemporary artists out there whose work you feel motivated by?

What record labels do you always check?

Cerrone – Out Of Sight