M GUN – The Near Future 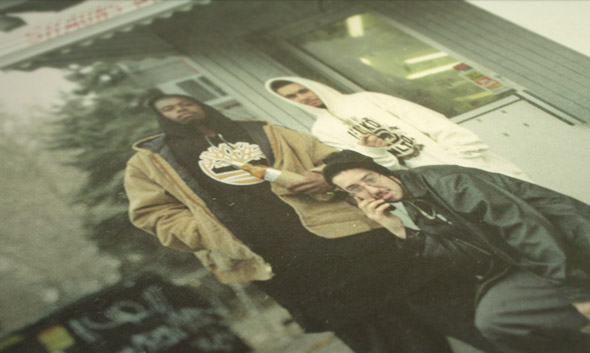 Having first emerged on the Wild Oats released Laygo My Faygo as part of NSNT PRJCT alongside Kyle Hall in 2010; Manuel Gonzales has found his own voice over the past twelve months. Resurfacing under the M GUN banner, Gonzales made an intensely rewarding full debut on Hall’s label with the cavernous deconstruction of techno that was Harmnear, and has subsequently struck alliances with some of the UK’s more interesting labels.

Released as 2012 drew to a close, The Upstairs Apt EP for Semtek’s Don’t Be Afraid was equally a statement of the label’s intent to escape the mundane trappings of many a current UK house operation and another compelling display of Gonzales’ obvious talent. A further mark of the Detroit-based producer’s ascendancy arrives with The Near Future EP on Will Bankhead’s The Trilogy Tapes label, turning out twenty minutes of wayward sonics that build upon his burgeoning reputation as much more than a one-dimensional house and techno producer.

The opening gambit on The Near Future comes in the form of a righteously hefty stomper that calls to mind the intensity of EDMX’s excellent “Cerberus” track, although coloured with daubs of anchorless synth matter bleeping and pulsing around the rock solid rhythm. “2” may sound the clarion for po-faced dancefloor damage, but the vibe is a short lived one as the two and a half minute workout gives way to the complete curveball stylings of “Walk With Me”. Sounding like a seventh generation tape rip chopped, edited and glued back together, the sonic matter consists of soft rock riffs and guitar licks looping over each other while a rhythm section comes drifting in and out of the mix.

“The Race” returns to more firm territory, locking into a slow electro groove with a distorted bassline that purrs constantly underneath the sizzling hats. All that’s needed is a few discordant melodic twinkles and a bona-fide UR atmosphere it created, packed full of the predatory urban dread that made records such as Electronic Warfare so alluring (and mildly scary). “Flutter’s Brother” exists in a similar sound world, except this time the textures and samples around the groove are more abstract, as scuffed voices and decaying strings loll about like the last drunk on an empty dancefloor. It’s quite intentionally ropey, much like the way Hype Williams et al strove for, except there’s something much less self-conscious about the end result on this release.

Even when the track is portentously a banger, as on closing track “Tiles”, there’s still a gritty edge to the sounds that suggests this is just how things come out in Gonzalez’s studio. Admittedly, when he wants to turn the graininess down he can do, but things never sound clean and crisp at any point on this EP.