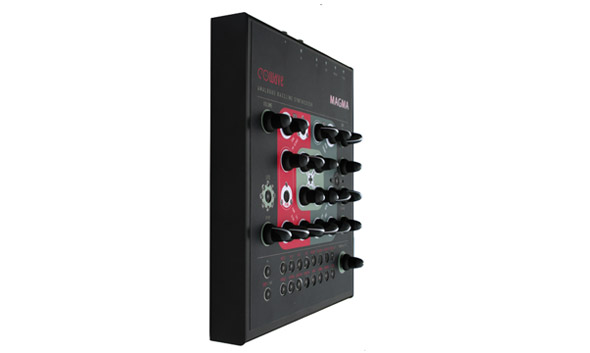 Small companies that make boutique analogue synthesizers have been the domain of mainly German companies but the French are making tremors with Eowave’s Magma synth.

Eowave is a small French company, founded by Marc Sirguy and Emmanuelle Gallin in 2002 with the goal of creating new and interesting tools for musicians and visual artists using a mixture of old school analogue circuitry with the latest sensory technology. Although Eowave’s innovations include the Eobody 2 Live Sensor Control, a type of control unit that allows you to control the parameters of a digital soft synth by gesturing over a sensor that is plugged into the unit. However, their new synth, the Magma (based on the company’s Koma prototype from 2011) is by comparison is a much more traditional affair, with a single oscillator, two LFO’s, four waveforms (saw, square, sub and noise), switchable envelope ADSR and sixteen step sequencer all housed in a lightweight graphite grey aluminium box with features and a sound heavily influenced by synths from the 80’s. Although its sound sculpting capabilities are more basic than some more fully featured models, to describe the Magma as a bassline synth such as Moog’s Minitaur could be somewhat misleading given the range it has for such a small unit.

The layout of the Magma is well designed, with a single VCO control in the top left segment offering control over octave selection and fine tuning, while the centre segment is home to the four different wave forms described earlier, each of which has a dedicated volume knob to allow you to create endless permutations of the building blocks for your sound. The 24dB low pass filter control is situated in the top right hand corner with two knobs for controlling cut off and resonance with envelope amount and trim control to feed it below in the bottom right, while the ADSR envelope controls for the filter and the amplitude are to the right of the main segment and flow top to bottom with a small button that toggles between the modes. The final bottom left hand segment is where the LFO modulation controls reside. With a choice of eight waveforms, as well as pre-set combinations that group two or three waveforms together, there is a lot of scope for creating interesting modulations, from slow opening and closing filters to bubbling pitch modulation, the speed of which can be adjusted using the dedicated knob under the LFO waveform selection button. 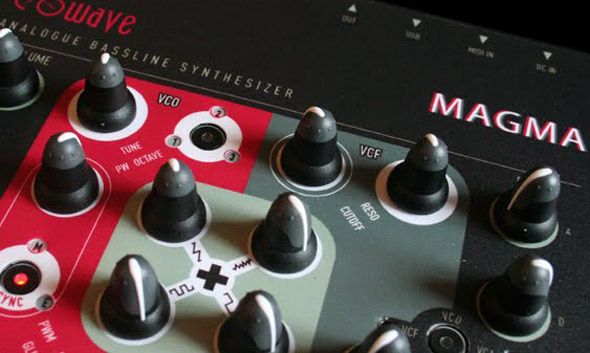 Once you’ve created your sound, it’s time to create a sequence to hang it on. The Magma has a sixteen step sequencer with three levels of sequence modulation for adding extra movement and colour to your creations. Programming notes is simple; the unit’s sixteen backlit buttons show you which steps are being used, and to change the note you simply hold down one of the steps whilst turning the tempo/value knob. The pitch being selected is indicated on the top row of eight backlit buttons using the secondary labels in grey and to get sharp (flat) notes the secondary part of the shift button when backlit indicates when you have selected a sharp note. The level of user feedback does make these controls a little bit difficult to get used to, and if there is a criticism of the sequencer it’s that there is perhaps a little too much functionality crammed into the unit’s surface area. To access the three sequencer modulation layers requires an abundance of shift and hold functions and although they are explained in the online manual it could have been a simpler operation. Once working though, it’s possible to get all kinds of different movements from your sequence. One of the questions that gets asked a lot about the Magma sequencer is whether you can accent parts of the note sequencer. If you assign volume as one of the modulation destinations then you can achieve the accent functionality that is found on old Roland sequencers, while you can also get your sequences to swing to varying degrees or make use of the shuffle by note function. You can just as easily use one of the 256 preset sounds and sequences if desired by holding the shift and pre-set button and then scrolling through the different choices, but it’s a lot more fun making your own.

“You can create warm, sonorous bass sounds or screaming acid lines out of this monophonic synth that can be utilised in any kind of production, and it’s a lot of fun to dive into a sequence programming session or create outlandish patches”

Around the back of the synth is a ¼” TRS audio input for affecting the signal from an external source, a single ¼” TRS audio output, as well as MIDI IN and USB connections. Although the audio signal path in the Magma is completely analogue, the unit’s digital integration makes it easy to sync up the Magma to your DAW of choice via a simple USB connection to your computer. If preferred, you can use the MIDI IN port and hook up a keyboard controller to play the Magma like a synth or use the keys to trigger transposition of your sequences.

The Magma is reminiscent of synths from the 80’s, even down to the graphite grey and retro looking artwork on the faceplate, but its closest ancestor in sound and function is the Roland SH101, which itself had a single oscillator, mixable waveforms and a step sequencer. Although the SH101 had a number of features not present on the Eowave synth, such as the classic add on modulation and pitch wheel for when it was being worn slung over a shoulder keytar style, the SH101 didn’t have the capability to save patches and sequences, like the Magma does, and along with its MIDI/USB connectivity and small size, it more than makes up for these shortcomings. However, there are a few downsides to the synth that can’t be ignored. First of all, the control knobs and buttons have a cheap, plastic feel to them; occasionally during use the buttons would get stuck for short periods of time, while the knobs had an unpleasant amount of give, meaning you could spin them too freely. Secondly, the online manual isn’t as comprehensive as it needs to be, and was at times confusing to read. In their defence however, Eowave fully realise this and are in the process of providing a finished manual.

Although the Magma has the aforementioned shortcomings, it’s difficult to fault the sound coming out of the unit. You can create warm, sonorous bass sounds or screaming acid lines out of this monophonic synth that can be utilised in any kind of production, and it’s a lot of fun to dive into a sequence programming session or create outlandish patches, whilst the USB and MIDI IN connectivity allow you to put your Magma into your studio set up or even take it out on the road with you as part of a live band set up. The Magma’s small, light frame and connection and syncing possibilities for example would make it easy to hook the unit and a drummer up to a laptop running a click track.

The Magma is to the Roland SH101 what the xoxbox is to the TB303. They sound very similar and fulfil a lot of the functionality of the original machines but they look quite different. The Eowave Magma is loads of fun to use creatively and we had a lot of success simply stacking different sequences on top of one another in Ableton whilst tweaking the filters or LFO modulation. Even if the look and feel of the Magma is a little bit cheap, the sound is great and that is all we can really ask for in an age where a second hand SH101 will cost you in the region of £800 (if you can find a working one). The competition for the Magma comes from the Mopho from Dave Smith Instruments or even the Evolver from the same company. But although the Mopho features dual oscillators with a 100% analogue signal path, and the Evolver features digitally controlled oscillators and polyphony, if you are looking for a particular sound that is close to that of the old Roland machines then you are more likely to be satisfied with the Magma.