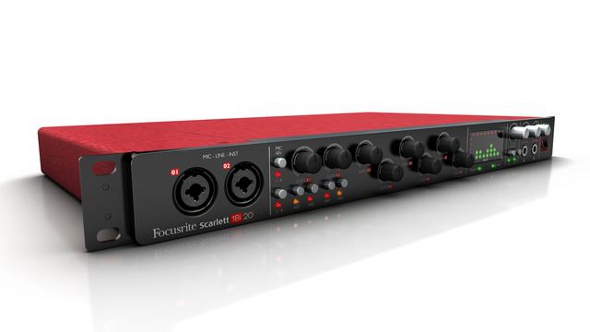 Audiophiles Focusrite have revealed details of the Scarlett 18i20, the flagship addition to their range of user friendly USB 2.0 audio interfaces, and the Scarlett Studio, an entry-level studio bundle.

The 18i20 marks the latest development in the company’s Scarlett line of USB interfaces and is the most fully featured unit in the line to date, featuring the crimson graphite appearance of its previous compact variants the 2i2 and 2i4, bolstered with eight microphone preamps with switchable phantom power capabilities. The unit also boasts 18 inputs and 20 outs in total (enough to record a full band), and comes with an additional software bundle of Ableton Live Lite, Focusrite’s Scarlett plug-in suite, Novation’s Bass Station soft synth and 1GB of Loopmasters samples for some extra production pleasure.

Compatible with Mac, PC and, interestingly the iPad – provided you have a camera connection kit – the Scarlet 18i20 features a wealth of high-end features; an additional eight channels of digital I/O are provided via ADAT lightpipe and an S/PDIF provides an additional stereo digital input and output as well as 24-bit/96kHz A-D/D-A converters. The Scarlet 18i20 also allows you to record audio and MIDI, as well as run VST audio instruments and effects such as the compressors, reverbs, gates and EQs included in the Focusrite Scarlett plug-in bundle.

It comes hot on the heels of the announcement of the Scarlett Studio, a package aimed at those looking for a basic all-in-one recording solution, and pairs their entry level 2i2 interface with its own software suite built around Cubase LE6 and fetching red studio quality microphone and headphone combo which are outlined in the video below; full specs for both products can be found at the Focusrite website.

The Focusrite Scarlett 18i20 interface is due for release in March with an RRP of £399; the Scarlett Studio bundle Press is available now for £199.99.