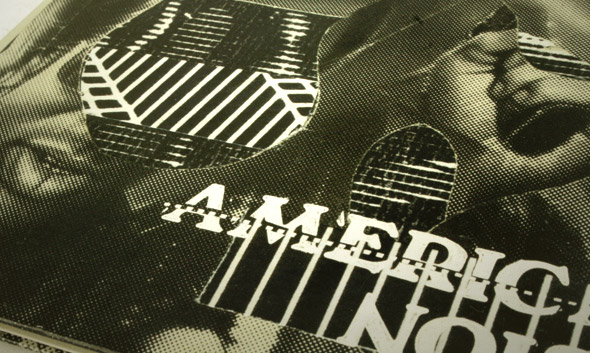 Although their appearance in the top label lists for many online outlets (ours included) may have seemed like it came out of nowhere, in reality L.I.E.S. have been releasing music for over two years and have already racked up about 25 releases – the majority of which arrived in the past 12 months.

American Noise is the label’s first compilation – featuring out of print classics and unreleased material – and provides as accurate a snapshot as is possible to give of a label whose catalogue is wide ranging enough to include industrial techno, ghetto house and ambient synth experiments with an Eastern tinge. However, one gets the impression that the sudden ascendance of L.I.E.S. is actually the culmination of connections label operator Ron Morelli has been making behind the scenes for a lot longer. This is obvious from releases by synth veterans like Professor Genius and Steve Moore, artists who have been frequenting the pages of 20 Jazz Funk Greats since 2008 and have been floating on the periphery for even longer. In a sense, this pair represent the prototype for the typical L.I.E.S. artist; producers of thick, heady analogue music that exists squarely in the centre of a Venn diagram incorporating house, techno, disco and noise music.

The idea of noise is perhaps key to understanding the output of L.I.E.S. Although much of the label’s output is, for want of a better description, house music, the undeniable connotations of the title American Noise put the output of L.I.E.S. in the city’s punk lineage (and the noise scene that co-opted it) rather than that of its disco heritage. This is most obvious in the productions of Torn Hawk; “Shock Tape” is like chugging Balearic rock heard through a groggy filter, the audio equivalent of the saturated 80s VHS inspired videos that he makes under his real name of Luke Wyatt, while Beau Wanzer – the one artist not to have released on the label thus – far provides the darkest track of all with the throbbing industrial sludge of “Jail Lock”.

On the whole however, the idea of noise isn’t as a literal engagement with genre; the subtle tendrils of Terekke’s “Pf Pf Pass” seem engulfed in a cloud of bristling tape hiss, the bumping house groove of Maxmillion Dunbar’s “Cassette Arabic” is occasionally disrupted by abrasive sample blasts and the elastic bass of Bonquiqui’s “Sandsovtime” is so lo-fi it gives the impression of listening to music via a knackered basement PA system through ears destroyed by years of loud music exposure. Even the music of Delroy Edwards, whose primary influence is ghetto house feels grimy and indistinct beyond the primitive production techniques displayed on a typical Dance Mania 12”. It’s interesting that the full meaning behind the L.I.E.S. acronym – Long Island Electrical Systems – seems to have fallen out of use, because it’s all the evocation you need to be able to imagine the label and its music. Its logo is the kind of thing you might stumble across in a decades old copy of the Yellow Pages; it suggests a tiny backstreet business run by a long-suffering, tattoo-covered misanthrope whose music is the sound of dilapidated, blue-collar American industry, all created with equipment beyond disrepair which crackles with rogue current.

Of course not all the music on offer is characterised by its mucky quality; the synths of Jahillya Fields’ “Servant Garden” ripple like a desert mirage tantalisingly on the edge of focus, Steve Moore’s “Frigia” combines the distinct lines of Tangerine Dream with a solid techno beat, Marcos Cabral’s “24 Hour Flight” offers crisp hi-hats and distinct yet subtle chimes and Legowelt’s “Ferns From Draconis” is a typically thick piece of impressionistic Chicago-inspired house. But although these tracks may lack the scuzz of their companions, their unfussy, loop-driven arrangements lend themselves a psychedelic quality. They unfurl, existing in their own elongated portion of time; this is nowhere more obvious than on “360 Waves”, a previously unreleased Bookworms track whose polished oscillations slow down to a crawl, dragging your temporal perception along with it. Psychedelia and noise have always been bedfellows, and anyone who has seen one of Morelli’s DJ sets will attest to the uncompromising way he combines these elements in a tracky house and techno context together with an innate understanding of their power on the dancefloor. It’s this pure reduction of forms that sit just outside dance music that has made the label’s output so unexpectedly compelling, its artists mutating the DNA of noise and psychedelia to create both superior and wildly deformed impressions of techno, house and ambient music.

L.I.E.S. are by no means the first label in New York to explore dance music through other genres; parallels can be drawn with DFA, whose early output melded contemporary strains of disco with post-punk, or RVNG, who have successfully fused an enthusiasm for edit culture with the avant-garde. But as years have gone by, RVNG has moved further away from dancefloor concerns, while DFA have forgone a breadth of output to focus more on core artists such as Yacht and Factory Floor. Although it would be tempting to suggest that L.I.E.S. are simply filling the club-focused gap these labels have left, no New York-based label that ths writer can remember in over a decade of listening to dance music has pumped out 12”s with such conviction – not even in the 2007-2009 period when DFA was at its peak. As such American Noise is the ideal primer for the confused observer, and easily the most vital compilation of contemporary electronic music to come out of New York since the second DFA Compilation released in 2004 – something that comes as no faint praise.