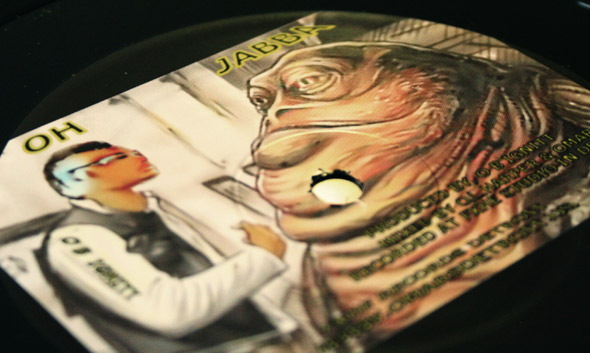 The fact that virtually nothing is known about OB Ignitt has led to widespread speculation that he’s another pseudonym in a long standing tradition of FXHE trickery, and it wouldn’t be the first curveball the label’s thrown at its fan base. After all, it’s doubtful that those Black Eyed Peas were responsible for remixing last year’s joyously anthemic “S.E.X”, and it’s still a bit puzzling that there never really was a “Wayne County Cops” pt. 1 that preceded Ignitt’s rugged analogue collaboration with Omar-S.

But the possibility that OB Ignitt is an anagram (Big Tit No?) can be dispelled with some shrewd googling. Given Omar-S’ former penchant for cars and street racing and Ignitt’s likely geographical location in Detroit, there’s a trail of breadcrumbs on the internet that will eventually prove, yes, Ignitt is a real person. Still, his decision to exist outside of the internet deserves respect, and “Oh Jabba” proves that he doesn’t need much of an autobiography to stand amongst FXHE’s peers as one of Detroit’s formidable talents. That’s saying a lot considering the superhuman standard that FXHE’s catalogue has been operating at over the past 12 months, releasing some of the most euphoric, soul cleansing dance music in recent memory. Ignitt’s collaboration on “Wayne County Cops Part 2” exemplified this to a tee, an emotive sugar rush full of synth-lines overtop crashing kicks and hi-hats, Detroit in full effect.

But while Omar-S has occasionally drifted into more exploratory territory such as the ambient skittering shuffle of “Income Tax Refund Dance” or the robotic drone-twerk of “Triangulum Australe”, Ignitt keeps his focus on the dance floor for “Oh Jabba”, delivering two gruff cuts of otherworldly, malfunctioning alkaline tech house. Though the cover art employs a kind of MS Paint minimalism that implies maybe five minutes maximum were put into its creation, there’s nothing skimpy about “Space Age Steppin'”, which immediately launches itself into the stratosphere with a jerky, extra-thick synth funk groove backed by a gurgling analogue bassline. Slightly warped arpeggios scale in and out of the track like a malfunctioning satellite trying to stay on course while orbiting, and Ignitt shows expertise at effortlessly tweaking variations within a set framework in a way that demands movement.

The first ten seconds of “Oh Jabba” sound like the track could be going somewhere completely different, as a subdued piano line improvising its way around a lone kick drum. However, the idea of a “relaxed” Ignitt track soon gets put to bed in favour of a pixelated crunchy kick and a thumping synth-driven 80’s powerhouse of a track, improvisational electronic frequencies fired out into the void. Listening to it while watching Darth Vader slowly boarding Princess Leia’s ship, obscured by a cloud of explosive fallout and blaster smoke at the beginning of Episode IV feels appropriate. While “Wayne County Hill Cops Pt. 2” was teetering on the edge of cheese, “Oh Jabba” flexes light-hearted intergalactic exploration and straight-faced house muscle in equal measure.

The idea of music as transportation to a new destination has been recurring for decades – Drexciya explored the possibilities of creating new communities underwater, forming a disaporic aquatic techno militia. Sun Ra went up instead of down, and pioneered radical space jazz that argued “space is the place” for possibility, citizenship and a metaphor for belonging. Whether Ignitt is interested in transporting our consciousness to a new stellar plateau or just a big fan of Hollywood movies is uncertain. But, if it’s the latter, The Crow was filmed in Detroit and would make an excellent finale for Ignitt to flex his musical prowess over. Just saying.