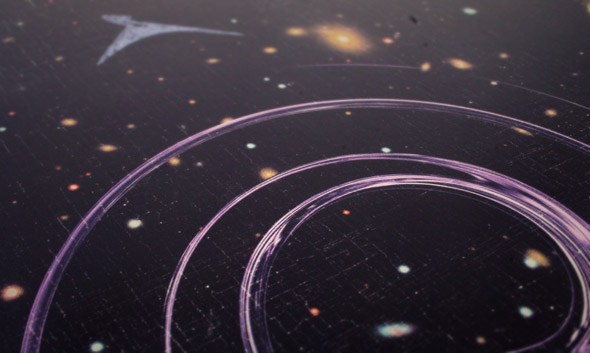 Is it a coincidence that Bambounou is exactly at the age where symptoms of schizophrenia start to manifest? Barely into his 20s, Jéremy Guindo-Zegiestowski’s output has prodigiously burst onto a number of emerging labels, from his ambient percussive algorithms on the Youngunz Alpha EP to the garage house bravado of recent Clek Clek Boom release Night / Brawl. Still, despite his effortless ability to channel different genres all over the musical map, there’s a volatile tension that sometimes rears its head in Guindo’s work.

This sense of internal tension was first notable in a video interview which discusses the origins of Orbiting, showing Guindo enjoying a luxurious dinner with Sound Pellegrino label boss Teki Latex. During the meal, Bambounou casually mentions that Modeselektor’s Gernot Bronsort has asked him for a full length album, uncharted territory for the young producer. Teki presses him about the project: “Ok, big new here. It’s a scoop. Are you going to do it?” Guindo rolls his tongue around in his open mouth in a gesture that looks like it could’ve originated in grade school, eyes lighting up mischievously. Hesitating for just a second, he nods his head and grounds himself, a serious expression replacing his carefree smirk. He nods, “Yeah, I will”.

It might not be schizophrenia, but this moment shows a duality, hybridity, a divide that this writer thinks is an essential part of  Guindo’s personality and production techniques. Orbiting infuses bits and pieces of the light hearted, percussively zany, club friendly side of Bambounou, tracks that feel like descendants of the misleadingly titled “Hugz”,  which champions an x-rated chorus guaranteed to evoke either smiling or blushing from everyone on the dance floor. But this is countered by a series of recently emerging darker, off kilter techno interpolations showcased on his most recent Cobe EP, whose cover finds Guindo’s unsmiling face staring past you – these are dead serious productions for dark rooms, spine rattling stuff that’s not playing around. These moments of giddy creativity nestled up to shuffling icy techno ambience are present in abundance throughout Orbiting, and they fluctuate between engaging, confusing, and awe inspiring. Which Bambounou are we getting? Does it matter? Are they the same person?

Album opener “Any Other Service” veers closer to the bubbly, upbeat side of Bambounou, wobbling rapid-fire syncopated emissions followed by a two-step garage stomp that sounds like it was banged out on the husk of a torched Chevrolet. Things get grittier as “Mass” echoes a growled and repetitive footwork style vocal line overtop – the unique percussive patterns that Guindo has paved a name for himself with are still there, but they’re being held underwater in a bathtub, murky mutations of his previous work. “Data” is where an unblinking, serious rawness emerges, and though he handles the spiralling techno terrain with the same deft skilfulness that the Cobe EP showcased, it feels compromisingly straightforward – played out without an ounce of winking pastiche. However, it’s equally valid to see ” Data” as a sign of maturity that retains a high-hat laden meatiness, especially if you’re in need of a late night club tool.

Part of what makes Orbiting distinct from Guindo’s previous work is the length, which gives room for a broad exploration of his sonic palette. This includes several interlude pieces, which give a cohesion and unexpected vitality at their best moments. “Ex06” does this well, a Drexciyan ode that feels like a slow-plummeting arpeggio race throughout the galaxy. One of the most mystifying and entertaining portions of the album comes in the form of “Let Me Get”, embodying the push-pull back exchange of warm and cold moments. A collaboration with French Fries, an acquaintance Guindo knows from their skateboarding days where he claims they wore identical “penis-hugging skinny jeans”, it’s not surprising that this cut contains the album’s most immediately anthemic and immature moment. Beginning with a faint calypso note in the background, heavy piano chords plonk down amidst a torrential fast spitting of “let me get that ass” – it’s ridiculous, paradoxical, and immediately arresting. Dance music has a long history of blending abrasive moments with reflective ones, but listening to “Let Me Get,” you can’t help but wonder where Guindo feels more at home – or perhaps if he’s still in the process of carving out his own new home.

Album closer “Orbiting” brings Guindo to one of the two entirely beatless cuts on the album, sweeping static and quick pulsating bursts of ambient, pixelated crunch. The sprawling galaxy depicted on the album cover feels relevant here, and the final track’s experimental nature can’t help but evoke Sun Ra connections in your mind – For Ra, outer space functioned as a metaphor for possibility, alternative terrain to reinvigorate oneself and one’s perspectives, a place to escape from the constraints of institutionalized oppression. For Bambounou, you get the feeling that he’s testing the limits of his own sonic comfort zones. Tracks like “Splaz” show the fruitful payoff of this foray into uncharted territory, a slice of percussive, imaginative techno hammered home with pinpoint accuracy. In other cases, the schizophrenic explorative nature of some tracks will be puzzling, engaging, and consciousness-expanding for those expecting… well, maybe for those with any expectations at all.