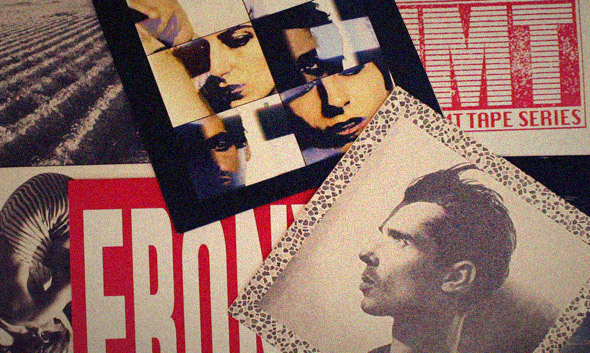 Our final end of year feature has us looking back on some of the best sleeve art to have been commissioned over the past twelve months.

It’s little surprise that a fair portion of the featured records come from labels that made our end of year list, as the visual medium is every bit as important as the musical message held within for operations such as The Trilogy Tapes, Blackest Ever Black, Death Waltz and PAN. Xosar’s design prowess was demonstrated this year with her own artwork adorning the two Rush Hour releases she put out (as well the Orgue Electronique LP on Crème Organization) and it was the Nite Jam 12″ that impressed us most, whilst the Amsterdam label also excelled with their artistic efforts on the Elbee Badd and MMT Tapes releases.

FXHE’s lo-fi attitude to the visual medium doesn’t always come off perfectly (the last Omar S LP for example) but the Oh Jabba 12″ from OB Ignitt charmed us as soon as we saw the pack shot, whilst the Kong Oscar/DJ Candle In The Wind transmission on Sex Tags UFO was made all the more memorable for the garish illustrations from Vilunki 3000 (who might just be the aforementioned DJ).  The fact that Minimal Wave feature prominently will raise few alarms with anyone whose has been following our monthly Best Record Sleeves column with the attention to detail shown on their Deux and Ohama releases, as well as the Innergaze album on sub label Cititrax demonstrating why we like them so much.

Type deservedly find a place with their endeavours to make their releases from Pye Corner Audio and Pete Swanson look so distinctive, as do Night Slugs for the Jam City album, with the musician himself overseeing the artistic direction for Classical Curves alongside label boss Alex Sushon and visual producer Bowyer; few other records this year were presented in a fashion that truly gave an insight into what the music had in store. Funkineven’s Chips/Sweets release was highly aniticipated at Juno Plus HQ after months of the Eglozoid successfully road testing it during gigs, and the record remained an enduring foot note in our memories thanks to the bold, eye catching design and unique packaging from designer Benedetta Sodini.

The Juju & Jordash album Techno Primitivism was made all the more special by Orpheu De Jong’s accompanying artwork that took full advantage of the space afforded on a triple vinyl gate-fold release, and made for the latest in a long line of standout design commissions the artist has completed for the Dekmantel label. Further praise must go to Mancunian designer Andy Cooke for the branding work that made Powell’s Diagonal Records label and the producer’s subsequent Body Music EP so memorable, whilst the Sullen Tone releases were undoubtedly helped by the vivid illustration work provided by Gerbil Tea’s David Packe. Few words really need to be said about Eve Ackroyd’s artistic input on Actress’s album for Honest Jon’s, whilst Hyperdub’s artwork for the Blunt & Copeland album was equally distinctive and amusingly credited to Danny Dyer. Other nominations such as Madteo’s debut on Hinge Finger or the Zsou 12″ released by LN:CC need little in the way of additional explanation for their inclusion.