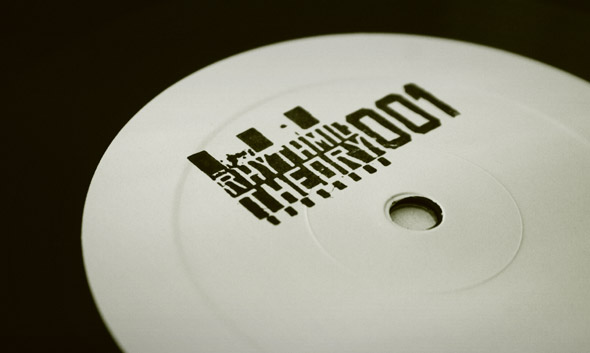 It’s sometimes difficult to recall the original purpose of the anonymous hand stamped 12” in the wake of so many adopting it as their means of distribution. Trend is all too often the enemy of creative purity, and so what has rapidly become de rigeur for the latest slab of analogue house and techno seems a far cry from the original intention; removing the context of personality and design and letting the music speak through unfiltered means. Of course it’s just as trendy to moan about how trendy things are, and so this Rhythmic Theory 12” comes as warmly received slap in the chops to drop the pontificating and just enjoy what is good.

There’s nothing to glean from the physical release other than the words Rhythmic Theory, which are as non-descript in themselves as to render any preconceptions nigh on impossible, and the catalogue number 001 which tells you this is the start of something. Of course with a bit of internet research you will probably ascertain some more about the background to the music, but that can be left to your own curiosity.

The A-Side begins on a stout techno tip, with distant, aqueous synth stabs fluttering around musical percussion and choice cowbell hits in a punchy but hypnotic blend that seems somewhat familiar if still ultimately satisfying. It’s the drop that instantly raises the bar on this track, bowling in unexpectedly as everything falls away to let a molten blues chord progression in. While completely at odds with what had been steadily building before, the gap is measured perfectly to launch back into the core of the track without jarring your senses excessively. It’s a tricky balance to achieve when pulling off such dramatic moves, but it’s handled perfectly here. The rest of the track darts off to interchange these established elements within the reassuring realms of techno, but everything great about the track comes back to that switch.

The B-Side is a more murky affair on the lead in, as ominous low end mumblings clash with jagged hats, but it doesn’t take long for a soothing and shapeless pad to mediate and provide emotional balance to the nervy percussive clique. The progression in this track is elongated, with a less dramatic switch-up but more intricate dynamics as modulating arpeggios feed into the mix alongside flanging gases and grainy swells of melody. For all the atmospheric musical content though, this is a track overflowing with energy helped no doubt by the raised tempo but really captured in the insouciance of all the component parts of the track. Rather than relying on intensity and aggression, this release fuels itself and its dancefloor impact from a more uplifting force. It’s by no means overtly happy-go-lucky music, but neither is it menacing or just plain grumpy. Somewhere between that nebulous emotion and the right kind of sequencing, two tracks of resolutely rousing techno have been formed.