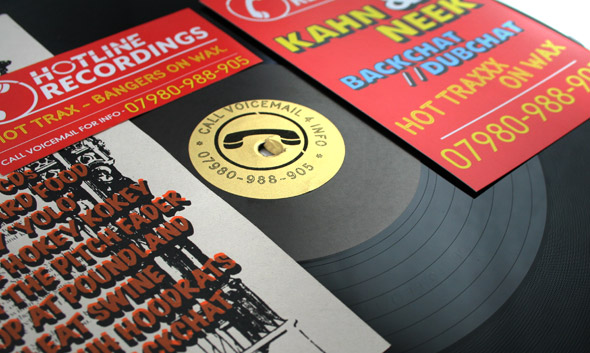 In a world ruled by the internet, it’s hard for releases to reach beyond the computer screen and have a grounding in reality, whether they’re physical releases or downloads. Even militantly vinyl-only emissions rely on the web to catch their target audience, from pre-release date hype to reviews in relevant online spaces.

Of course it would be a foolhardy (or thoroughly self-assured) venture that ignored the benefits of the net as a means of raising the profile of your label; these days it’s difficult to get a handle on how independents used to get themselves out there before such accessible platforms were available. The chaps behind Hotline Recordings are certainly no fools, but they’ve capitalised on a canny combination of online activity and a simple idea that harks back to the good old days, and in the process whipped up a storm of anticipation around this debut release.

The trick of having a phone number on all the promotional material for this Kahn & Neek single is maddening in its allure. At one point in time, no-one would have seen much, if any, appeal in phoning up a record label just to hear a sample message previewing the tracks, and at present people are more used to scanning a Soundcloud player to get the feel for a forthcoming tune. Hence bridging the gap into the seemingly more real world of the telephone now feels somewhat revelatory, and the chance to leave a voicemail at the end of the preview becomes an interaction far more engaging than clicking ‘Like’.

The visual aspect is spot-on as well, from the cannily sourced YouTube video for “Backchat” to the posters, flyers and stickers that have been working their way around the ground zero of Bristol and further afield in an immaculately realised pirate style that represents another logical step in the Tape Echo studio’s quest to keep aesthetics real. There is a point where the decoration runs the risk of dwarfing the music of course, and there’s no denying the presentation and dissemination of this release adds a great weight to the music contained within. Much like a chef will be pulled up on their presentation skills, of course it doesn’t hide the fact that the flavours have to be nailed as well. In the case of Kahn and Neek, their previous form is assurance enough that there’s no danger of style over substance.

Continuing the guttural mix of grime and bashy dancehall that made their “Percy” single earlier in the year such an underground smasher, “Backchat” finds a nagging vocal hook and rides it relentlessly over a primal beat, splashing dirty effects over the basic elements to a deadly end. The only additional hype needed in the tune comes from a three-note synth string which cowers in the background, clearly intimidated by the rude drums and vicious lyrics but injecting just the right amount of energy needed to keep things interesting.

Where “Backchat” is a stone-cold banger, “Dubchat” represents more of a revelatory kind of track as the malice gets shorn away by heavily skunked half-speed atmosphere. In many ways it is a simple dub re-rub of the A-Side, but the sharp deployment of cavernous chords and industrial drum hits takes it into an entirely different place. Halfway through the cut, the drums pick up the pace and work into a beat verging on electro, as glass shattering and gunshots come echoing through the mist. Hotline’s marketing angle is both scarily astute and charmingly romantic in the same motion, while the music continues this energetic thread of grime-influenced updates that unabatedly wreck the dance. There are already murmurs on the horizon about what the next release for the label might be, but there’s only one place you’re likely to catch a first glimpse of it. Get reaching for that phone…