DJ Nature – Return Of The Savage 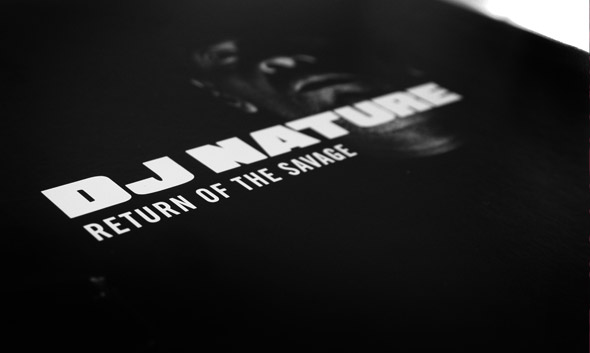 DJ Nature’s been in control for several decades now. From Milo Johnson’s early days of jamming out with Bristol’s Wild Bunch sound system to an 1989 transition from London to New York and the subsequent beginnings of the Nature Boy project, there’s been an assurance and confidence permeating through every “ruff disco” production that he’s gotten his hands on. Johnson’s decision to step back from producing at the peak of his mid-90’s success to raise his two children instead speaks to this self control and sense of timing – much like his decisions to turn down gigs that would “sacrifice sound quality for money”, there’s a strong drive and determination to deliver his musical message on his own terms.

So when you hear a soulfully proclaimed “I hope you’re ready for me, I’ve been waiting for this a long time” kicking off one of the tracks on Johnson’s double LP offering Return of The Savage on the esteemed Golf Channel label that’s been the home to most of his productions since his resurgence several years ago, you know that something special’s going on. Though it’s not surprising that the 180 promo copies of this release disappeared instantaneously (Golf Channel promos create a Bigfoot-comparable hysteria, elusive to the point where you start doubting their existence in the first place), it’s also a testament to the soulful, sentimental, sexually charged powerhouse of an album that Johnson has seemingly effortlessly constructed. The immediate cohesiveness of the album’s tracks might seem surprising for someone whose entire career up until now has been built around edits and singles, but the full length format suits Johnson to a tee here, as he shows a tireless energy for seamlessly blending one moment into another, tapping into a supply of timelessly soulful dance music that looks to Detroit, Japan and New York, tips its hat to Todd Terry and De La Soul, but still remains principally under his own complete and total control.

Controlled is very different from bland though, as Return of The Savage finds him flexing more percussive muscle than ever before, merging chaotic moments with sweetened jazzy hooks, always teetering on the edge of falling out of step, only to plummet back into the groove. While some moments are remarkably polished, Johnson still employs a very conscious push and pull between the sweet and raw, with enough jagged, bulky kicks laced throughout to ensure that the prevailing feeling throughout is one of uninhibited movement.

The title track barrels out of the gates with a pulsating groove that feels like something Donna Summer would have loved to worked her vocal chords over the top. It could serve as the magnum opus of Johnson’s work – elegant, precise, dipping in and out of history, intertwining threads of dance music together, weaving different histories together in the span of seconds. Theo Parrish’s influence is clattering around the percussive patterns that gleam deeper access to hidden recesses of the track, and with bongos, gasping yelps and moans merging with modular electric noodling, it’s clear that this is an unhinged celebration in full swing, a jam session in progress where everyone is hitting the right notes.

“Tacky Stuff” is anything but, strutting along on an effervescent smoothness while slowly flipping extra percussive patterns over itself, doubling up while a plucky xylophone solo explores the terrain on top. Part of Johnson’s approach to production has involved the tension between smooth and unpolished, and has expressed praise for the idea of “the rugged studio”, a technique that pioneers like Patrick Adams would employ where well-played instruments would be matched with sub-par recordings, merging sophistication with a sheen of grit. That’s at play in the bulky drums here, which evoke the feeling of a hungover walk through New York’s meat packing district on Sunday morning, sun peeking through the clouds, prostitutes packing it in for the night.

If there’s one thing “1970” deserves notice for, it’s the art of a perfectly executed slow flourishing ramp-up, throwing sputtering pads in the mix with a string symphony, tracked over the laughter and screams of children. Soulful and stirring, the pacing builds up perfectly into a searing saxophone solo that emits a warmth best suited to smaller, dim dance floors tucked away somewhere secret. There’s also a personal element coursing throughout Return Of The Savage, and many of the vocal samples can be read as a reflection on Johnson’s own cross-cultural existence, be it his time spent exporting records to a Japanese store and subsequent revered status whenever he visits the country, the initial move from Bristol to New York that birthed the Nature Boy / DJ Nature project, or the multiple vocal samples discussing ethnicity, including “Real Talk”‘s dissection of what defines soul singing. Is it ethnicity? Presence? Soul? Feeling? Johnson’s takeaway seems to be that labels don’t matter much anymore, it’s soulful if it’s got soul.

Creating a smooth flowing album can make it tough to pick highlights, but “Sexual Tension Scene 1” makes a strong case for itself, ratcheting up the adrenaline among erotic moans, stomping handclaps, faint acid squelches and, in case that doesn’t evoke some starry-eyed nostalgia, there’s even a Gospel-worthy organ solo and euphoric saxophones smack dab in the middle of things. One of Johnson’s biggest talents is creating these moments of distilled exhilaration and beauty only to have the drum machines interrupt in all their stumpy, pre-programmed roughness, pulling that ecstasy back down to the ground and rubbing it around in the dirt a bit. The same approach works even better on “Sexual Tension Scene 2” where a wailing gospel drawl takes prominence and everything else in the track tapers off for a few seconds, while we’re listening to a near-whispered vocal line, only to be pulled back into the rough hypnotic thumping of Johnson’s percussive powers. It’s one of DJ Nature’s most spiritual tracks yet – exuberant but never glossy.

“The Yeam” exhibits the same snarling energy of last year’s “C.O.A” edit, exercising some consciousness expanding drumming that merges well with the slinky, vibrating electronic beat which sounds a bit like a hyperactive toddler dialling numbers on a phone. And finally, bringing it back together is “Savage (reprise)”, coming full circle and using the same beat as the title track with some different organ sounds improvised over the top. Is it a comment on the cyclical nature of dance music? A subtle meta-nod to his own origins? Or just Johnson’s way of exorcising any jam-out desires that he hasn’t fulfilled on the other tracks? Whatever it is, it’s safe to say that it’s exactly what he wanted it to be.