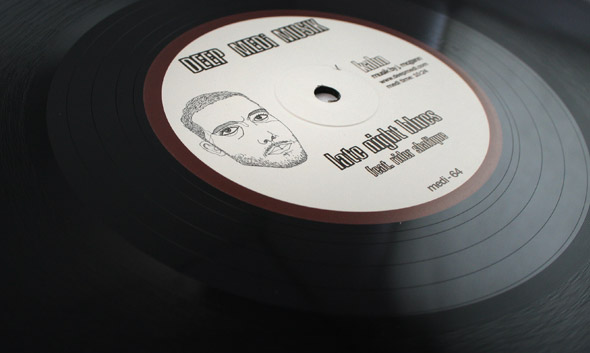 While dubstep continues to splinter into its myriad variations, from toe-curling pop to ear-splitting bangers and everything in between, it’s reassuring to find a continued stream of producers interested in exploring the original space the genre occupied, where the evolutionary path is a much slower one. It’s a curious appeal that doesn’t rely on the shock of the new, but rather contributes to a bigger picture, solidifying a sub-culture of dance music over a longer period of time, emboldening its resonance.

Kahn represents a strong case on his debut for Deep Medi, which is by and large a classicist approach to dubstep (as you might well expect for Mala’s imprint). In his previous outings he has tackled a staggering range from synth heavy steppers, refined and modernist garage, to raucous grime and rootsy digi-dub. As something of a chameleonic producer, it could be surprising to find Joe McGann turning out the raw, spacious cuts that occupy this 12”, were he not so innately versed in the fundamentals that form the basis of the sound world he dips into.

The incendiary vocal lick that kicks off “Dread” rasps and spits with the grit of 80s dancehall, instantly recalling the addictively unsettling grunts and groans of ragga MCs on the earliest jungle tracks. You’re half expecting an amen break tear up to ensue, but the icy rhythm that comes in locks you down to the hypnotic plain of consciousness that exists about ten octaves below the hypest drop you’ve ever experienced. The use of restraint as a deadly weapon is of course one of the key building blocks of purist dubstep, and it’s executed here to a deadly conclusion. The star of the show once the beat is rolling is the delay, echoing, rippling and splattering out gems of noise atop tantalising swells of bass.

With some considered vocal assistance from Rider Shafique, “Late Night Blues” comes on startlingly stripped-back, fuelled by a crisp beat and soothing sub bass rumble. The glacial chord swell and distant clangs only serve to cool things even further, and once again the delay gets opened up to fire the drums off into the ether. It’s a pristine turn, eschewing fireworks and shifting dynamics for a slow and steady twist-out, building up the feedback but never letting it run away from itself.

As tracks on their own, both “Dread” and “Late Night Blues” come from a very familiar place. There are countless examples of tunes made in similar ways, but that’s not something to hold them back. From the core era of jungle, and even in the case of modern exponents of the genre, the formula essentially remained the same. The music is made to be part of a greater whole, to be heard over a loud soundsystem alongside similar tracks to craft a cohesive experience. That’s not an excuse for laziness of course, but the beauty of this culture of production is the removal of ego from the equation. It’s not a characteristic you can find in all producers; only the ones with a true respect for what their music means and where it belongs. Limitations will always be an excellent barometer of how creative any artist can be, and within the boundaries of dubstep Kahn has easily proven his talent.