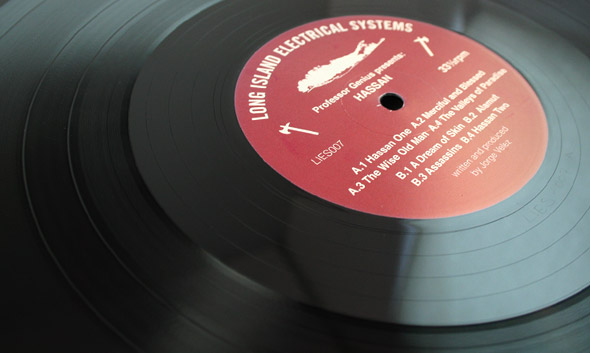 Hassan is Jorge Velez’s soundtrack to an imaginary film based on the Order of Assassins, a shadowy Middle Eastern cult formed in the 11th century. Having entered a cinematic headspace, the Brooklyn-based synth auteur then decided to raise the conceptual stakes – he was going to pretend to be an Italian soundtrack producer working on the film’s score in the early 1980s; kind of like Eno’s oblique strategies, but more fun. Velez mostly limited himself to using analogue equipment that was readily accessible 30 years ago, drew up a rough movie plot in his head, and got to work. As such Hassan makes for an intriguing prospect, promising drama and intrigue before the needle even hits the record.

Under the stewardship of Hassan-i Sabbah, the assassins operated in Persia and Syria around the time of the Middle Ages, and became known for bringing the lives of hostile political, military and religious leaders to abrupt and frankly messy ends. They would spend months, sometimes years, stalking their victims, and this sense of pregnant, calculated doom lurks throughout the album’s eight original tracks, with subtle Arabic motifs and droning synthesiser patterns pulsing and throbbing beneath hollowed out, husky percussion.

The subdued opener “Hassan One” is nothing more than a series of gently sweeping synths which reek of an eerie kind of pre-dawn calm, while the rhythmic claps and pensive drum hits of “Merciful And Blessed” are reminiscent of Lancastrian duo Demdike Stare, whose own aesthetic is shrouded in a similar cloak of sinister mysticism – in fact their own “Hashashin Chant” from 2010 is named after the same band of assassins Velez was inspired by.

The rich ambient textures of “The Wise Old Man” hang in the air like an electrical storm happening on a distant horizon; colourful, rich, unfolding and overlapping in slow motion. “The Valleys Of Paradise” evokes images of a small band of turbaned warriors making their way towards a forbidding mountain pass, while “A Dream Of Skin” retains a kind of unsettling atmosphere, like a hot wind blowing across the desert, whipping up mini tornadoes of sand. “Alamut”, a track named after a castle Hassan and his assassins overtook by stealth in 1090, sees Arabic strings contorted around rhythmic hand claps and synths that pulse like blood pumping through a vein.

Meanwhile on “Assassins”, the rubbery synths become distorted, the percussion more urgent; it’s easy to imagine now the masked assassins fleeing on horseback, quick and stealthy in the dark of night, escaping into the desert after committing their latest political slaying. The LP is rounded off with three remixes, and those chosen have clearly taken to the project’s concept with relish; Steve Moore, Marcos Cabral and Steve Summers tackle “Time Of The Assassins”, “Merciful & Blessed” and “The Valleys Of Paradise” respectively, but it’s Moore’s version, with its gently rippling arpeggios sounding like a lost Carpenter/Howarth treasure, that impresses most.