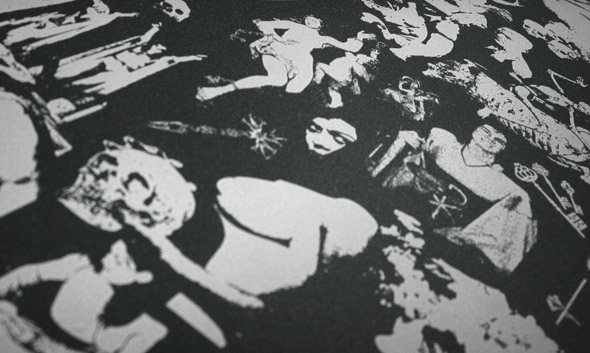 Naming the lead track of your EP “No Fun” seems like it’s setting the listener up for  a disappointment, especially in a dance music landscape where self-congratulating droney minutia and sad sack futurebass™ have laid claim to their share of the market. Fortunately, Nocturnes boss JR Seaton (now operating under the Call Super alias without former partner Matt Waites, whose other commitments couldn’t sustain the project) is likely having a little self reflexive chuckle here, as his No Episode EP on Throne of Blood taps into a consciousness-bending contingent of stomping, urgent techno that can animate bodies in just about every position except a yawning one.

“No Fun” is the most immediately accessible track on the record, a churning and grinding  bassline rippling throughout, the teeth of vintage analogue sounds sharpened into fangs. Buzzing with a warehouse infused energy, it weaves back and forth from aggressive to inhibited, with melodic flourishes that sound like the quieter moments of Orbison and Boddika’s Sunklow collaborations cutting in and out between the arresting bass thump, always on the precipice of kicking into overdrive. It’s the kind of track that could effortlessly move the feet of a crowd that claims they hate techno.

Remixing “No Fun” is Italian-but-probably-more-of-a-New-Yorker-by-this-point Madteo aka Matteo Ruzzon, whose move to the States has turned him into an unofficial archivist for the dirt-stained underbelly of Brooklyn’s non-discogs catalogued bargain bin record selection, as evident by the thorough attention to mislabelled $1 vinyl finds which are detailed on his Tumblr. Madteo continues honing his knack for the dust-coated weirdbeat displayed in the cassette-only Trilogy Tapes released Mad Dip Revue, and his reworking of Seaton’s material is infused with the same low-slung, gritty house beat that’s constantly fluctuating, on the verge of crumpling in on itself. Seaton revealed that when he approached Ruzzon and John Heckle for remix duties, he only provided them with tiny loops and samples, withholding the full stems in hopes of getting a radically different final product. It worked here, with Madteo’s take on “No Fun” swapping the thrumming urgency of the original for a hissing collage reminiscent of a basement bodega washing machine stuck in the spin cycle. It’s not without its threadbare, hazy appeal though, as the slight permutations throughout give it a hypnotic 4-to-the-floor throb, immersion through repetition.

“No Fool” starts the flip side off on a decidedly darker tip, giving prominence to percussion that sounds like echoing footsteps down a hallway while layers of bubbling, synaptic techno rumblings build up around it. At its peak, an almost balearic atmosphere starts to take form, piano keys slowly emerging from underneath the 808-influenced mechanical clatter. Heckle works magic with the scraps of “No Fool” that he’s been given, running the track through intermittent echoes, an unpredictably raw stutter effect that withholds and releases itself as the track unfolds. Though Heckle’s reputation shows an affinity for relying on analogue equipment, the technique employed here obfuscates where analogue ends and digital begins, allowing “No Fool” to keep its decidedly workout-oriented aggression without coming across as too unpolished.

Pairing Call Super with Throne of Blood fits like a glove and feels like one of the strongest releases that the label has showcased thus far – that the match-up facilitated Heckle and Madteo’s remix work into the equation is an unexpected bonus. Along with L.I.E.S. and the Mister Saturday Night crew, New York dance labels are showing a resurgence of vitality and raw energy lately, raising the possibility that Seaton’s “No Fun” is missing a comma, and intended as an instructional message reprimanding brooding, sulky dance music producers. “No, FUN.”