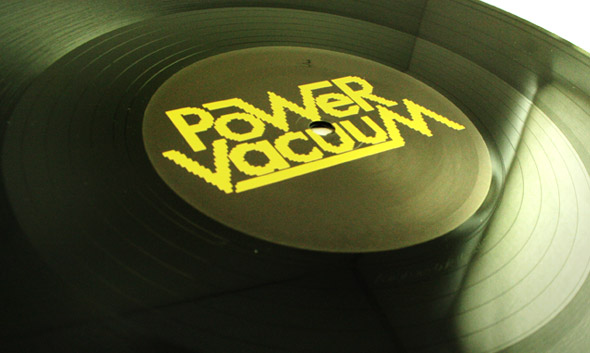 Following a stern debut on Power Vacuum earlier in the year, Milo Smee revisits his Bintus project to further expand upon its dishonourable intentions with your synapses. It’s safe to say that the Bintus sound is no cleaner on this new two-tracker than it was when it first emerged, but there is perhaps a sense of forwards momentum all the same.

“Drink Ye From The Acid Chalice”, while initially a marvellous track title, is also a masterclass in how to further the purpose of the 303 in a world that has been positively drenched in lysergic bass lines for umpteen years. As with before, there’s a primal sensibility in Smee’s approach which sees a strict path of rhythm stretch out in front with little to no deviation. This is not a track with dynamic peaks, troughs and swerves, but rather a classicist approach to creating excitement out of tweaked parameters executed with poise and precision rather than showboating studio brawn.

The drums are rasping and brittle, just as you would want them in this kind of grotty house jam, with the finest percussive hit coming from a particularly troubled cowbell. It’s the acid line itself that draws you in, rocking the same phrase throughout like a good riff should but subtly morphing in sonic properties so as to make it seem almost unnoticeable from bar to bar. The fact that so little seems to change throughout and yet the track keeps you locked in says a lot about how well Smee can execute the acid manifesto.

Again reflecting the first release, the title track comes in a faster electro formation with a rigid breakbeat made all the stronger once the monstrous bass note comes in to bolster the kick. But what’s more noticeable are the varying melodic elements that define separate sections of the track; the plastic mandolin has a wonderfully chilling tone to it, only to be outdone in the creepy stakes by a haunting chime that wouldn’t sound out of place on a Touchin Bass record. As the track progresses, so the various elements filter in and out, warp and flutter and twist around each other in a stark contrast to the measured repetition of “Drink Ye From The Acid Chalice”.

Of course both of these tracks are built on the foundations of long-serving musical phenomena, rather than inventing some new route, but in a context such as this it doesn’t matter. Whether the tracks were made 25 years ago or 25 days ago is irrelevant, they still smack hard and create an alluring atmosphere of sinister rave goodness built on creative hardware manipulation to attract the darkest souls.