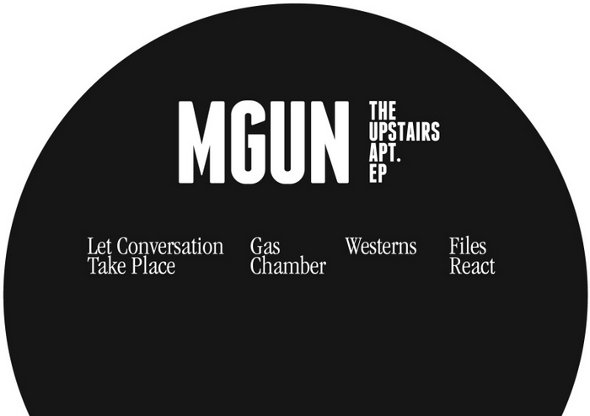 A casual scan through Manuel Gonzales’ Soundcloud page reveals a lot about the way this Detroit producer chooses to operate. While some artists these days seem to be quite careful about what they put on their personal music channels, Gonzales shows off reams of irreverent doodles, sketches and skits created under the MGUN moniker alongside fully-fledged tracks. With the music on the page and the music he releases, the unifying thread is one of unruliness, where brazen synths come bowling forwards with their brow furrowed and the drums fall in laissez-faire patterns that wind up crafting new expressions of instinctive rhythm. That however might be a little too romantic a tone when talking about the rugged approach Gonzales takes.

Having previously appeared in collaboration with Kyle Hall as NSNT PRJCT as well in solo form on Wild Oats, now he joins forces across the pond with Semtek’s Don’t Be Afraid imprint, delivering a stark message of house and techno spoken in plain terms through rust-bucket equipment and recorded with live impulsiveness. While there may be an impressive number of layers and facets to the tracks on The Upstairs Apt, there’s no need for crafty editing or shifting dynamics throughout the duration.

Opening track “Let Conversation Take Place” delves into the deep house pool for its cues, largely defined by the drifting chord phrase that comes in and out of the mix. The scuffed drums follow a stiff, largely swingless path replete with appropriate fills, and a rounded square wave bass line lends a moody, acidic undercurrent to proceedings. These elements cycle throughout the track without much deviation, only guided by a strange slice of vocal matter that appears intermittently throughout, but largely the premise is a simple one. That those elements are communicated through strange, myriad noises glued together seems a moot point when the music still hits as directly as it does here.

“Gas Chamber” is even more urgent in nature as it hurls itself in front of a juggernaut beat with accompanying roughneck synth line. It’s on this track you can hear a tangibly live approach, as the manic melody wobbles and warps, shifting key, waveform shape and release in the most ungracious of ways, bringing to mind an image of Gonzales hopping about energetically in his studio while sparring with his weapon of choice. “Westerns” flips the script somewhat with a beautifully realised beatless cut that lets the synthesiser freakery get into a wonderfully psychedelic bubble that comes on both warm and cosmic. It once again sounds like a doodle that made it to the final cut unedited, but there’s something quite relieving about hearing music this free of over-thinking.

It’s left to “Files React” to head back to a more familiar 4/4 territory, only for all familiarities to be dropped as the track roams off into a barren landscape populated by spartan hiccups of noise and effects, while the only discernible melodic element comes in a sputtering echo. It’s a fitting climax to an EP brimming with singular narratives, stewing well-worn ingredients for Detroit machine music and then serving them up in weird and mostly wonderful formations. Nestled among the likes of Kyle Hall and Omar-S, there’s no doubt where Gonzales is taking his lead from, but there seems to be an unlimited well of production talent emerging from the Motor City. While it’s a little late in the day to talk about reinventing the wheel, that’s not to say MGUN won’t be emblazoned on plenty more fetching circular objects to come.