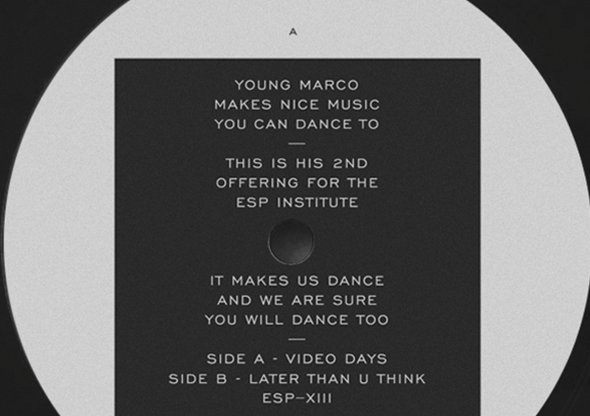 In the space of just a handful of EPs and a smattering of remixes, Amsterdam graphic designer-turned-producer Marco Sterk has proved to be a serious talent. His material, like much of that on Lovefingers’ eccentric ESP Institute label, demonstrates a love of both dark and light sounds, treading the fine line between grandiose, rush-inducing electronica and murky, basement-friendly house. It’s this contrast, fused with a love of near Balearic melodies and titanium-clad drum machine rhythns, that gives the Dutchman his distinctive sound.

This trademark sound is further developed on this two-track missive. While both tracks have echoes of his previous 12” for the New York imprint – the sharp melancholy of “Nonono” and the aural bliss of “Darwin” – they’re arguably a cut above anything he’s done to date. Certainly, there’s signs of continued progress in the intricate synthesizer and percussion work.

“Video Days” opens proceedings, delivering a blast of warm, tropical air. Based around a rising and falling arpeggio that recalls the glass-clear synthesizer melodies of Ryuichi Sakamoto, it doesn’t so much burst from the speakers and slide from them seductively. Despite the presence of rock solid drum machine percussion – filling a skittish pattern that, again, recalls Sakamoto’s early ‘80s electro work, with the addition of classic acid house handclaps – it’s unwaveringly picturesque. If “Nonono” was like “Larry Heard on a fistful of downers”, “Video Days” is akin to experiencing an orgasm-like MDMA rush in the company of Yellow Magic Orchestra, Lindstrom and LB Bad. Sterk’s work has always been joyous – even in its darker moments – but “Video Days” adds previously hidden layers of emotion.

“Later Than You Think” is, typically, almost as impressive. Whereas “Video Days” is almost startling in its brightness, “Later Than You Think” oozes warmth. Sure, there are spacious, intergalactic touches – check the fizzing synths that wind their way around the jazz-flecked drums –but the main impression is of being hugged by a sweaty, hairy stranger. Again, there’s an attention to melodic detail that’s impressive. The main riff – a kind of chiming, “Coma Cat”-ish synth-marimba loop – is perfectly matched by the tough but live sounding drum break, which sounds as if it was sampled from a rock or jazz record. The combination of the two elements provides a frisky, attractive canvas onto which Sterk layers long, drawn-out strings and bittersweet chords. Again, it drips with emotion, but the grooves are, once again, formidably tough and steely. Sterk is quickly turning into a masterful producer with an ability to infuse machine rhythms and entirely electronic compositions with genuine human warmth, beauty and emotion. News surfaced recently that he’s working on an album: judging by what he’s put out to date, a Young Marco full-length could be very special indeed.