The third and final instalment of the Trus’me remix series has been announced, with Berghain regulars Ben Klock and Ryan Elliott appearing alongside Ukrainian producer Vakula.

The remix series has served as a showcase for Trus’me’s new techno-leaning focus, with the Mancunian producer, real name David Wolstencroft, clearly quite taken with the sounds emanating from Berlin club Berghain. In addition to Klock and Elliott, previous remixes in the series have come from long term Berghain residents Marcel Dettmann and Norman Nodge, while US producers DVS1 and Terrence Dixon have also contributed remixes of “In The Red” and “Shakea Body” respectively. In recent times Wolstencroft has unveiled a new alias in David James to share his own techno productions, and has launched his own roving club night entitled 1redlight. Overall it marks a significant new direction for a producer best known for his soul, funk and disco-infused deep house material for the likes of Fat City, Stilove4music and his own Prime Numbers imprint.

On Trus’me Remixes Vol 3, Klock has remade 2007 cut “W.A.R. Dub” – possibly the most popular Trus’me track here at Juno Plus towers – with the German stripping the original of its rhythmic sub bass and honing in on ice cold broken beats and lacerating drums, while Elliott turns “Nards” into a skittering effort beset by spookily panned fractured vocal elements. On paper, Vakula (aka Mikhaylo Vityk) is seemingly the only concession on the 12″ to Trus’me’s deep house past, but in reality the man from Konotop has turned in the heaviest treatment of the lot, turning 2009’s “Need A Job” into a visceral, unforgiving slab of acid house. 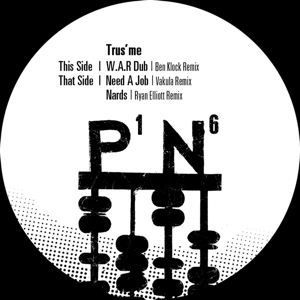