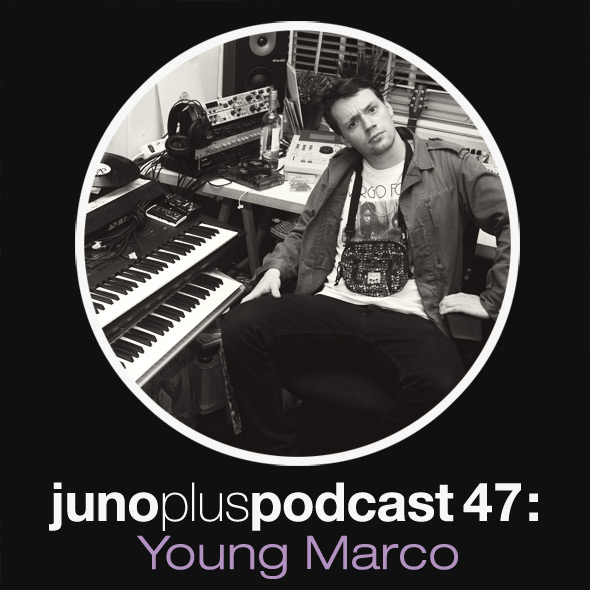 Juno Plus Podcast 47 is an exotic blend of music curios from across the globe, courtesy of ESP Institute regular Young Marco.

The producer, real name Marco Sterk, first appeared on the Juno Plus radar with two EPs of spectral disco on his own, now defunct Hand Of God imprint back in 2010. However his talents were truly unveiled with last year’s beguiling Nonono 12” for the New York based ESP Institute label run by Lovefingers. Both the title track and “Darwin In Bahia” shimmered with a melodic warmth all too lacking from house music these days, and belied a predilection for sweet, minimalist percussion – not too dissimilar to what a Steve Reich house track might sound like.

This was preceded by an appearance on the Amsterdam All Stars compilation from Dutch imprint Rush Hour – where Marco works full-time as a designer – and an appearance on another Dutch label, Studio Soulrock, in collaboration with Tom Trago and Awanto 3. This year has seen Sterk settle down as a member of the ESP Institute family, first remixing Melbourne-based producer Michael Ozone’s “Hetrotopia” to hypnotic effect, before returning last month with another solo outing, Video Days, which further demonstrated his ability to deliver music that doesn’t quite fit into neat categories.

Marco’s Juno Plus mix takes us on a journey through all manner of instrumental oddities, and he was kind enough to respond to some questions we fired at him via email, revealing news of a debut album slated for 2013 in the process.

You seem to have developed a close relationship with Lovefingers’ label ESP Institute – how did that come about?

I got to know Andrew (Hogge) through my good friend and personal Buddha Tako who does Red Light Records (the best secondhand record shop in the world). I just sent some stuff I was vibing on, and he liked it. It just seemed a perfect fit, and I’m super happy to continue releasing stuff on ESP, because there’s is no agenda. I mean he’s just a big dork like the rest of us, but there is something to ESP which is really special I think, a timeless attitude, it’s very honest, and there are no rules or scene shit involved.

You obviously have a background in design, but how long have you been making music for?

Well, I was kind of a geek when I was a kid, and people would donate their old computers to me. So even though they were already really outdated, I had a bedroom filled with stuff like Atari ST’s, Commodore 64’s, Apple 2s, and I was already making music on those with trackers and stuff. But that was more of a tween phase I guess, but a good basis as I still use some of that stuff to make music. Later when I was DJ’ing a lot , I guess in 2003, I started buying some proper synths, and just kept going.

Living and working in Amsterdam must be a pretty good environment when it comes to inspiration too right?

Yeah totally! When I’m bored or hungover, I can get on my bike and in the timespan of three hours, I can visit, say, Red Light Records, the park, the Rush Hour store, a friends studio, eat a really nice lunch, buy some guitar pedal, and be back in my studio and I’m super psyched to do stuff.

Your music has a melodic quality that seems to incorporate sounds and influences that stretch beyond the standard house signifiers; this tendency also shines through on your Juno Plus mix. What kind of music inspires you to create your own material?

I guess I’m into a pretty broad palette of stuff, mostly older weird records – I don’t listen to an awful lot of new music. Not because I don’t like it, there’s just so many more old records than new records in the world. Also I don’t consciously try to make a certain kind of music or dance music even, I usually just make a couple live jams in a night, and then usually something cool will come out. The best ones are when I’ve had slightly too much to drink and don’t remember making the track at all.

What have you got coming up, release wise, for the rest of this year and 2013?

A bunch of remixes, one or two more 12″s but most importantly, an album. It’s my first album, and I’m pretty psyched about it, I have a lot of tracks laying around already, but I think I’m gonna spend two weeks somewhere to finish it all up, like on an island maybe. Oh yeah, I also just did a soundtrack for a documentary which was really interesting to do, its pretty far out, a lot of droney stuff and ambient tracks, maybe I’ll put it up as a free download or something soon. 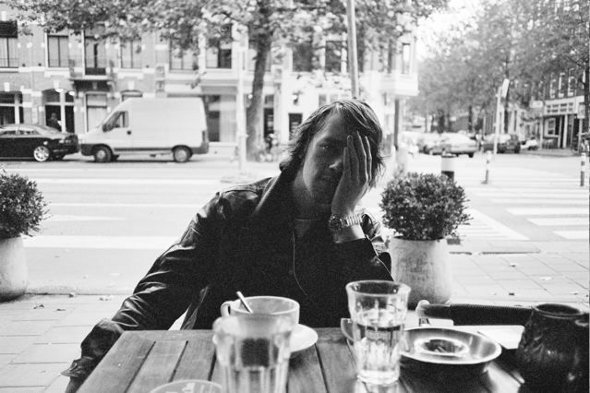 Do you plan to revive your Hand Of God imprint or is it going to stay dormant for now?

Not really, that was just a tool to get some stuff out, right now if I stumble upon something that’s interesting to put out I do it through Rush Hour.

Your day job is at Rush Hour – tell us a bit about that. It must be fun working at such an esteemed organisation?

Yeah, it’s a lot of fun and very inspiring. I started out designing most of the sleeves, which I still do, and these days I’m doing all sorts of stuff for the label side of things. I’m kind of a rush goalie (pun intended).

Which other labels are really doing it for you now and why?

Among many others and in no particular order: Themes for Great Cities, Future Times, Emotional Response, P.P.U., Kunstkopf, L.I.E.S. Because it’s real people doing things for the right reason.

Tell us a bit about your Juno Plus mix – how and where did you record it and what kind of mood were you trying to create?

I recorded it in my studio, on two turntables and a Rodec MX180. I have a hard time playing “club” sets when I’m by myself in my studio, it feels kind of pointless. But this is some stuff that I’m really feeling. Don’t get me wrong though, put me in a club and I will play you a club set with a vengeance. But this is more a doing the dishes/drugs/jogging type of affair.

There’s no tracklisting and our attempts to trainspot left us feeling pretty sheepish; can you give us a broad overview of the kind of music you selected?