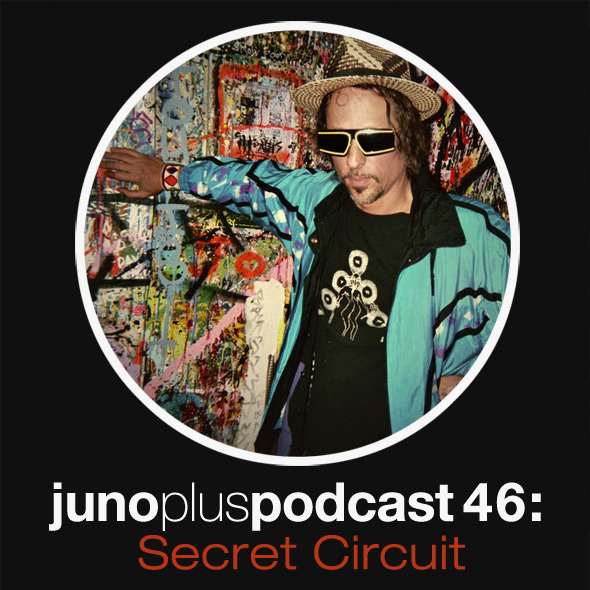 The central axis field of Secret Circuit mixes the 46th Juno Plus podcast – expect the weird and the wonderful.

Eddie Ruscha is the man behind Secret Circuit, a music project whose releases this year for Beats In Space, Internasjonal and most recently Emotional Response have charmed the hearts here at Juno Plus, though his musical – and indeed artistic – heritage stretches back much further. Those with some grasp of contemporary art history will no doubt recognise the Californian as the son of famed Pop Art exponent Ed Ruscha and an acclaimed visual artist in his own right.

This creativity extends to the musical realm, with Secret Circuit just one of a number of projects Ruscha has been involved in stretching as far back as the early 1990s. Dungeonmonkey, Future Pigeon, Food Of The Gods and Laughing Light Of Plenty are some of the names and bands that bear the musical fingerprint of Ruscha over this extensive period, though Secret Circuit has been the one constant throughout; an outlet for Ruscha to create improvised and experimental analogue music.

Remaining under the radar of wider appreciation for some time, Ruscha seemed content to treat Secret Circuit as a DIY project, self releasing numerous albums or putting out his trademark Cosmic Papers mixtapes on cassette via the Teenage Teardrops label. For one reason or another, the cosmic stars have aligned in 2012 and graced us with a surfeit of fully released Secret Circuit material, the arrival on Beats In Space earlier this year with with the excellent Nebula Sphynx 12″ (memorably described in Matt Anniss’ review as the kind of music you might expect from earth conquering “robotic chimps wielding weapons fashioned from circuit boards and faux oak effect keyboards”) preceding the release of a much delayed debut on Prins Thomas’ Internasjonal Spesial label.

Tropical Psychedelics, recently released by London label Emotional Response, grants Ruscha his first physical album of sorts, compiling some 12 highlights from those various self-released albums and acts as a perfect introduction to his style of melding sounds and neatly sidestepping conformity. With that release still fresh in our ears and with whispers of further new material due for release on Tim Sweeney’s label, we took the chance to invite Eddie into our podcast series. The resultant hour long session is as diverse in style as his own music and he was also kind enough to answer our questions.

Hi Eddie, many thanks for doing this mix, where was it recorded?

I recorded it in my studio. I have a janky little DJ setup there.

Was there a particular theme to the mix?

The only thing I went by was to somehow reflect a bit of the Tropical Psychedelics vibe of the LP. Maybe things that I was listening to at the time or things I think fit now. It ended up changing a bit as it was going. I run on instinct.

It’s thanks to Tim Sweeney that we came across your work, how did Nebula Sphynx come to end up on his label?

A few years back there was a label called Universal Rejection and they contacted me about doing a kind of raw electronics 12″. This was about the same time that Prins Thomas had contacted me about doing a 12″ for Internasjonal Spesial. Anyways, I had a couple of tracks I thought would fit the raw electronic style so I sent them off. I didn’t hear from them for a while until they contacted me saying that they passed the tracks to Tim Sweeney and Matt Werth at RVNG and they said they were  interested in releasing them on Beats In Space. Tim and Matt were just starting the label and I had already made a mix for Tim’s radio show previously. Also through Laughing Light of Plenty Tim knew who I was. It turned out to be a great thing.

I’ve seen Tim charting a Vakula remix of one of your tracks and noticed he’s currently mastering an LP of yours – could you offer some more info on that?

The Vakula mix will be coming out on the next 12″. It’s all mastered and sounds amazing. He did a real deep mix which is his forte I suppose. The LP is more along the lines of the Nebula Sphynx 12″ but there are more vocals and song oriented tracks as well.

Tropical Psychedelics, your new album for Emotional Response is excellent, are you happy that this selection of cassette releases has found a wider platform?

I’m beyond happy about it! I think Emotional Response did a great job putting the stuff together and I feel they put a lot of time into choosing the tracks because there is a lot of material to go through. There is just a mass amount of Secret Circuit music. They put a lot of care into their releases and are good guys.

Modern analogue psychedelia seems central to the Secret Circuit sound, as does an improvised approach – is your recording process basically press record and see what happens?

Psychedelic sound is always something I’ve gravitated towards because I always seem to seek the otherworldly. To me it puts me in a spiritual transcendent space, I think, and that’s what music is, in a way. I do improvise for the most part and I find a purity in that. I see myself as a conduit when I record. It’s very rare that I have a previous idea before I go in, although things I’m listening to or am inspired by at the time make their way in subconsciously. I mostly just try to make things that I want to hear! As for analog synthesizers, I find them completely inspiring. I’m not opposed to software synths by any means, in fact I use them from time to time and I always felt that Secret Circuit should embrace all methods of music creation analog and digital. For me it’s not simply about the sound quality and warmth of analog synthesizers, it’s about the creativity you have using a semi working machine with physical knobs making sounds that are actually magical because you discovered them may never be able to make them again.

There’s been a few notable Secret Circuit remixes lately too, do you approach these in the same manner as your original work?

Half the time I don’t listen to the original at all, especially at first. I’ll start dropping the tracks in and see what my ears gravitate to. It is very similar to my own productions creation-wise. It’s almost like a collaboration and that’s a great thing about it. You hear something you don’t expect and you respond to it.

It’s hard to find a place to start with all the different music projects you’ve been involved in over the years; do you think as Secret Circuit you found an artistic focus?

Really, I’ve been doing Secret Circuit music for a long time even during these other projects. I guess it was kind of secret in a way! I would just pass it out to friends. I like things to happen naturally and it seemed like the climate of where music was going etc. just seemed to be right to begin to put it out there. Not to say I was ahead of my time or anything but I will say that playing shows with a bunch of pedals and a 4 track cassette machine on a table at a rock club did seem confusing to people. In a weird way, I think people performing on laptops helped make it acceptable. People are used to it now. 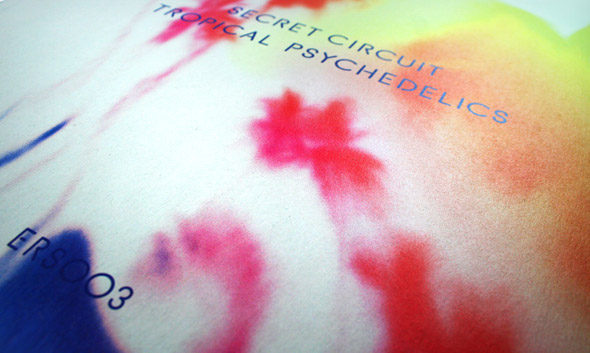 I also notice that one of your Future Pigeon releases came out on Dim Mak almost a decade ago now, does that feel weird given the widely opposite directions you’ve gone to that label in its current form?

It’s funny, I have no idea what they are even doing nowadays! I mean Steve Aoki obviously but… It’s funny, I only really knew him back then and obviously he’s probably a different guy now. I saw him a few times right as he was taking off and he was always cool. A friend of ours Cali DeWitt hooked us up with them and they had some idea to flirt with dub music so they put out this 10″ dub plate special. Cali runs the Teardrops label I put my Cosmic Cassettes out on.

Aside from music, you obviously have a successful career as an artist – was this the reason for you to be quite happy to self release music over the years

I think that really I have a strange side to me that makes me not want to force anything, at least artistically. I think everything happens for a reason and it just so happens that channels open up and I just flow in. As far as art and music, in one way it’s actually really hard to balance the two. To switch head spaces is really difficult when you are deep inside of the other one and you have another deadline coming. The good side is if you’re sick of one, the other is waiting. Right now I have a lot of music things on the horizon so I’m focusing more on that avenue.

You performed at MoMA PS1 as part of the Warmup season of parties earlier this year alongside Floating Points and Hieroglyphic Being, how was it?

It was very exciting to be a part of it, and Hieroglyphic Being is a hero to me so it was great to meet him and share the stage with him. We actually hung out the whole day eating BBQ and just chilling. He’s amazing. His set was super wicked as well. He just went all out and all over with his selections.

That place looks crazy, was it daunting standing up on that stage in front of a massive crowd?

It was thrilling for sure. PS1 is really great because the energy is so infectious. The people of N.Y. really love PS1. Everyone is in a really positive head space and it really transmits. It can be a bit daunting in front of that many people but it adds to the excitement and really the goal for me when I play live is to forget about the people and the place and get lost in the sound, that’s when a communion starts to happen.

Finally, if you were to take the Juno Plus editorial on a weekend out in Los Angeles where would we go?