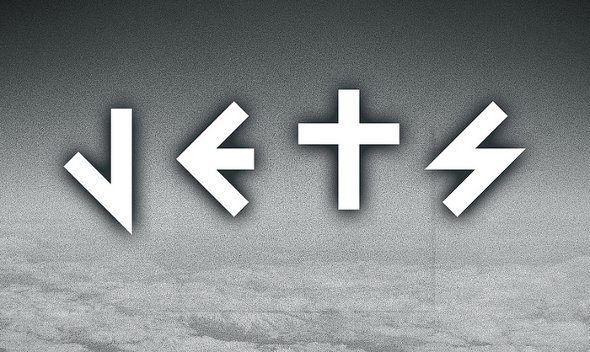 Travis Stewart aka Machinedrum has been playing a lot of funeral music lately. Last year’s YouTube released “Swag Funeral” was exactly what it sounds like, the micro-trend causing “S word” repeated over Chopin’s Funeral March. Recently, a “Trap Funeral” track employing the same method has also been making the rounds during Machinedrum sets. Stewart is obviously taking shots at a few deserving (if not easy) targets in dance music , but approaching his collaborative EP with Detroit modular synthesizer aficionado and sleazy funky veteran Jimmy Edgar begs the question: what exactly is it these two are making, and will there ever be a funeral for it? Better yet, will there ever be a classification?

While JETS’ debut EP is packed to the brim with trace elements of the things that have made Stewart and Edgar sought out in their respective (though rarely overlapping) corners of the dance music world, the end product is an entirely new beast. Decade-long friends since touring Japan as teenagers, there’s an interlocking compatibility at the core of the record that merges Edgar’s proclivity for modular synthesized funk and mechanically focused syncopated jacking of Machinedrum into a hazy new concoction that’s abrasively seductive.

“In Her City” demonstrates this relationship to a tee: Creeping along on a subdued chord progression and a heavily filtered 2-step beat which soon give prominence to a wailing moan, it sneaks up slow, surging with an emotive punch that really kicks in right before the track cuts out abruptly. Though this EP has been in development for four(!) years, the fluidity of the collaboration really shows here, and has the feeling of both jamming out live together in a Berghain after-hours club, shooting a sweaty glance at one another, astounded by the results.

Similarly, highlight flip side cut “Lock Lock Key Key” is slicker than an oil spill, gliding along effortlessly on a rapidly paced percussive pattern while the pleading vocal repetition of “you like it” gets chopped into a vortex of endless syllabic reincarnations. Edgar’s self-professed interest in hypnosis and neurolinguistics seems relevant here, as the vocal line takes on a rhythmic, stoic hypnotic quality that grabs attention the way few vocal chops do these days. Machinedrum’s drum patterns appear in the thick of things and add an extra, simmering footwork influenced urgency. What’s most impressive is the way Edgar and Stewart demonstrate complete control of the momentum of the track, moving in synchronicity together towards a finale that sounds like a mutant cousin of Snoop’s “Drop It Like It’s Hot”.

When interviewed, JETS have spoken about how one of the goals of their collaboration involves trying to impress each another, and if there’s a weak spot here, it’s that Edgar and Stewart might be trying to show off too many tricks at once. “Meu” might demonstrate this, as the two throw everything in their repertoire against the wall under the presumption that it’ll all stick. What results is a frenetic blaze of futuristic shuffling dubstep funk that’s crowded enough to make one claustrophobic. However, played out in a club setting, the shuffling urgency of the track is sure to ignite feet and hips.

Combing through Edgar’s recent interviews suggest he may have a form of colour synesthesia, a condition where one perceives tones, letters, numbers or melodies as colours, a visual palette in the mind. If that’s the case, then “Sin Love With You” is four minutes of purple magenta funk, synths leading the vocal gasps to a plateau where Stewart’s percussive downstrokes fill out the track heartily. Edgar and Stewart are both eccentric, distinctive and sometimes divisive artists, but they’ve crafted an intricate achievement here – unique, intensely danceable music that’s difficult to categorize, but truthful to each of their signature roots and sounds. Whether or not swag and trap music deserve a funeral march, JETS deserve a wedding processional.