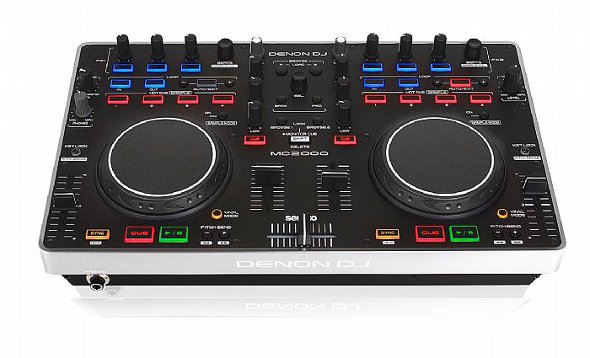 Denon continues to jostle for pole position in the increasingly competitive DJ controller market. However, is it a case of horses for courses when it comes to the MC2000? Robin Lee finds out.

Denon are a brand with a long and respectable history of innovation and quality in the world of audio equipment. They developed Japan’s first disk cutting lathe back in the 1930s and have designed audio gear for the broadcasting industry as well as products for professional and home use. In the early ‘90s Denon had an award-winning dual CD playing deck in the DN 2000F, which was a standard issue player for clubs and bars at the time. However, things moved on and Denon’s player didn’t stand the test of time. When their competitors brought out products that better simulated the kind of control that only came with vinyl decks, Denon’s original machine looked seriously out of date. But it would be very unwise to write Denon off, because since that time they have been making some very high quality products indeed, including a range of excellent decent DJ controllers.

“There’s a noticeable absence of the cheap, plastic fittings that tend to plague other controllers in this class”

The MC2000 featured here is really a natural extension of previous controllers such as the DN-HC 1000S with its simple USB connectivity, designed to work with Scratch Live, or the more comprehensive SC2000, which is a more professional grade controller featuring a jog wheel and control over two decks. As you ease the MC2000 out of its box, there’s a noticeable absence of the cheap, plastic fittings that tend to plague other controllers in this class. Although this unit – and others like it – are not necessarily designed for professional use in huge super clubs, they are frequently used in challenging environments, probably being carried along with a laptop and headphones, so a solid build quality is an absolute must. The MC2000 features two decks with jog wheels in a mirrored design separated by a browse and mix section, and is designed to work straight out of the traps. There’s no need for an external soundcard as it has one built in, which allows you to perform all the cueing and mixing operations you would expect from any similar analogue set up. 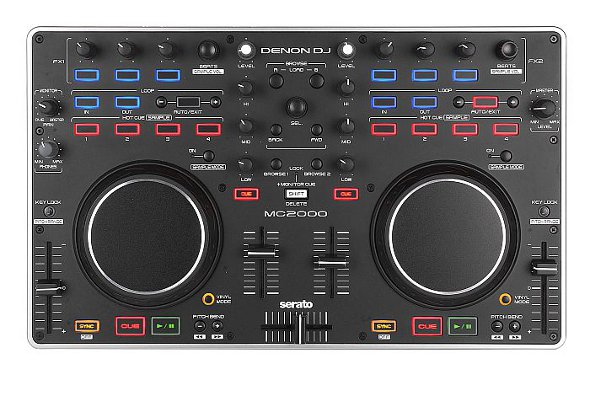 The layout of the MC2000 is uncluttered, with three knobs, buttons and a push encoder along the top of each deck offering control over FX. Each deck also has comprehensive loop control and four hot cue buttons; a shift button in the centre of the unit allows you to access secondary functions, along with a dedicated button for toggling sample mode. There is room for four sample decks each side, a total of eight, but unfortunately the DJ Intro software can only accommodate four in total, effectively giving you control over the same sample decks twice. As is the case with all the buttons, the cue, play/pause and sync controls have a quality feel to them and are more akin to sturdy, rubber buttons as opposed to the plastic type. The 60mm pitch faders have a comfortable amount of resistance to them and are accompanied by key lock/pitch range control (8%,16% and 50% in DJ Intro), and there are also pitch bend keys which double as forward and reverse scan keys when used in conjunction with the shift button. The jog wheels themselves are comfortable for the overall size of the unit, and when operating DJ Intro in sync mode with the vinyl function on, it is possible to perform scratch effects using the top side of the jog wheel surface while the sides remain in jog mode. This kind of split, touch sensitive control is ideal for making quick adjustments on the fly. The mix section further compliments the unit with a cross fader that’s suitably malleable for cutting and scratching, and channel faders that offer more resistance for club style DJing, topped off with dedicated headphone cue selectors, three band EQ and level control on either side.

The browsing control on the MC2000 consists of a single push encoder with dedicated buttons for loading your chosen music onto deck A or deck B, with back and forward buttons to ease navigation. There are a further two browse buttons below; these are redundant in Serato DJ Intro but serve as additional MIDI controls for you to map as you see fit. The built in soundcard is more than up to the job of delivering clean, punchy and loud audio, and is impressive for a product in this price range, especially as this unit is solely powered through the USB bus of your computer. Additionally, there seems to be plenty of accessible level to be had through the headphone cue output. The sound is delivered through a stereo RCA output at the back and there is an auxiliary stereo RCA input with both monitor and level control, in addition to a 6.35mm TRS mic input with level control. The knobs for controlling the mic level and auxiliary inputs are of a high quality – a pleasant surprise as usually this is where other brands tend to cut corners – although this writer would preferred to have seen the level control knobs on the front panel, next to the headphone jack, rather than the back. There isn’t a booth/monitor output and it might have been an improvement to offer the possibility of incorporating your analogue set up with phono/line inputs, but that may have required Denon to add a separate power supply – a feature that has been included on the MC3000 model.

The Novation Twitch and the Pioneer WeGo are probably the most comparable products to the MC2000 in terms of two deck controllers at a similar price geared towards beginners. The Novation Twitch doesn’t have jog wheels and instead makes use of touch strips – this writer feels that if you are learning to DJ then you will be better served getting used a more universal control surface; after all, you never know when you might have to use different equipment. The Twitch is designed for use with Serato Itch, which is perhaps more advanced software than DJ Intro, but with new .tsi file mappings for use with Traktor Pro and Virtual DJ, the environment in which the MC2000 can be worked has certainly broadened. The WeGo from Pioneer benefits from the simple fact that Pioneer are the best known brand for DJ equipment, but it doesn’t shape up to the MC2000 in terms of build quality. If there is any gripe with the MC2000, it is with the fact that there are no meters on the unit, making it harder to match levels before you get to your mix point. But this is a small quibble that is easily worked around by putting both programme channels through the headphone cue system. Denon have made a robust controller that works with DJ Intro without the need for any excess fiddling around. The MC2000 services all the DJing basics and with its portability and flexibility, including a mic and auxiliary input, Denon have come up with an all-in-one solution for beginners and aspiring mobile DJs alike.