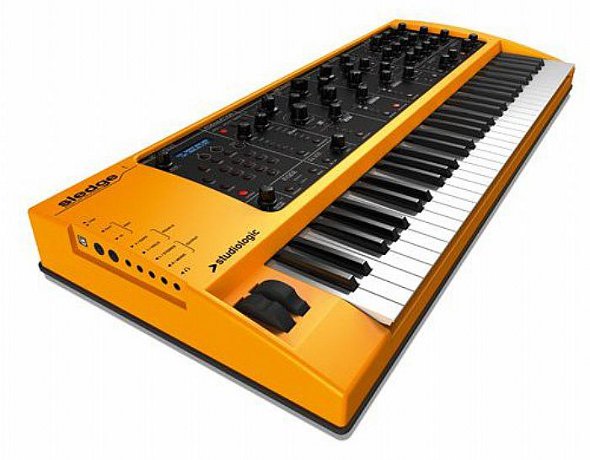 Born out of a collaboration between Italian keyboard manufacturer Studiologic and German synthesizer designers Waldorf, the Sledge polyphonic synthesizer has arrived and it’s nailing its colours to the wall. We get under the skin of this cross breed to find out if its insides are as striking as its exterior.

Regardless of how the colour scheme on this sixty one note, eight voice polyphonic synthesizer hits you, knobs and buttons are always a welcome sight and this synth has plenty. But don’t be put off by the seemingly complicated array of controls – the layout is immediately recognisable as that of pretty much any analogue synth. Only this is not an analogue synth; under its exuberantly coloured hood is the purring engine of a digital synth designed to have the tactile feel of its analogue cousin, with three oscillators and a choice of classic waveforms, including sine, square, triangle and saw, as well as a full set of wavetables derived from the well regarded PPG Wave synth. This, incidentally, is an important part of this keyboard’s family tree, with the design of the original PPG Wave technology and its circuitry featuring on Waldorf’s Wave and Microwave synthesizers from the 1980s and 90s. These days however, Waldorf’s best known product is the Blofeld, which has both a desktop and a keyboard version and also combines virtual analogue technology with wavetable synthesis in a 25 voice polyphonic setting. But at the heart of the Sledge synth is something different; Waldorf were approached by the Italian keyboard makers, Studiologic, who wanted to develop a way of controlling virtual analogue technology in a classic tactile housing.

“At first glance the Sledge looks exactly like an analogue synth, somewhat reminiscent of the old Moog products”

At first glance the Sledge looks exactly like an analogue synth, somewhat reminiscent of the old Moog synths with three oscillators, each with the choice of seven octaves controlled by a chicken head rotary switch. The semitone tuning and pulse width are both controlled by dedicated knobs, with oscillator one having a wavetable selection control while oscillators two and three have fine tuning controls. All three oscillators have selectable sine, saw, square and triangle waves, with the possibility to sync oscillator two to oscillator three, as well as various modulation configurations. The mixer section allows you to easily get the balance of all three oscillators along with a noise generator for both pink and white noise. It’s very handy having an on/off switch for each oscillator here to facilitate the architecture of your sound.

There is a multi-mode filter which is switchable between a 12dB and a 24dB slope with the option of low, hi or band pass filtering. One of the pleasant surprises found here is when you move any of the filter controls, the sound doesn’t jump wildly from its preset position but has a rather more natural soft curve to it.  The filter envelope has ADSR and amount options, while the amplifier envelope has ADSR with velocity, both of which are controlled by their very own dedicated knobs with no dual functionality or sharing. There are two effects sections, the first of which offers control over the rate and depth of chorus, flanger or phaser, and a second which lets you get to grips with timing and dry/wet level of either a reverb or delay. On the downside, there is no way to toggle the effects on or off directly – you have to cycle through the effect types to reach the effect off option. Glide and trigger mode control are easily accessed with a handy button to toggle between polyphonic and monophonic mode. The Sledge has eight note polyphony, which means you can only play eight notes together at any time, which is in line with the polyphony associated with analogue synths prevalent in the 1980s. A healthy array of modulation options are available: you can control depth and speed using the dedicated knobs and assign the shape and destination by cycling through the options clearly marked with LEDs giving feedback on selected shapes. 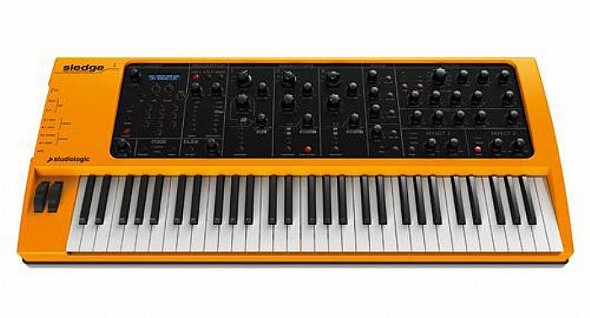 The front panel has very well-spaced controls, which is to be expected on a keyboard of this size, and all the labels have a retro, sci-fi font (think Buck Rogers meets Battle Star Galactica circa 1979 and you’re not far off the mark). The retro theme continues with the preset patches, with sounds loved by analogue aficionados painstakingly recreated in digital format here, and they do sound extremely convincing. Patch changes are controlled by a numeric pad, which this writer favours, as it’s an efficient way to change patches quickly in a live environment. There is also a push encoder and up/down cursor for navigating patches and menus. With full and warm mono lead sounds, classic saw tooth stacks and b-movie style sound FX sit alongside pre-programmed arpeggiated patches, the tempo and direction of which can be controlled by cycling through the menus on the digital screen. This includes a tempo latch option which is implemented through the MIDI protocol found on this keyboard. A modular styled digital sequencer would have been a nice inclusion here – it could have existed on the patch level, accessed and edited using the controls already in place for navigating menus. In fact there is a category for sequences when storing your own sound creations, so maybe this is something that Studiologic have in mind for the future.

“The front panel has very well-spaced controls, and the labels have a retro, sci-fi font – think Buck Rogers meets Battle Star Galactica circa 1979 and you’re not far off the mark”

The Sledge offers USB MIDI connectivity, along with standard MIDI I/O, 6.35mm ports for a sustain/hold pedal and an expression pedal, stereo left and right 6.35mm ports and an equally sized headphone port. These ports are usually found on the back of most keyboards on the market, but Studiologic have put them all on the left facing side. It’s possible that this design was used so that the housing of the keyboard could be deeper in breadth, allowing better spacing for the substantial controls. The pitch and mod wheels are in the traditional position and the master volume sits in easy reach on the bottom left corner of the main panel. Interestingly, Studiologic opted for a figure of eight type power supply, which is the least common of all power cables and is likely to become a headache if lost or misplaced – perhaps the more traditional euro lead would have done a better job. The only other question mark is over the choice of colour, which is perhaps best described as being Lamborghini yellow; people will either love it or hate it, but it does make for a welcome change from the usual charcoal grey, black or silver keyboards, although perhaps a black chassis with wooden panels would have been more in keeping with its retro feel.