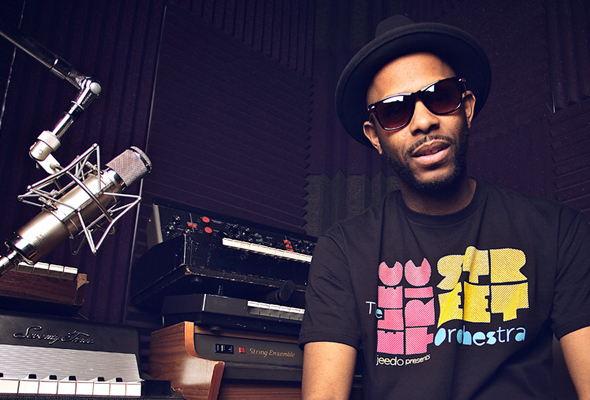 Most memorably known for his Platinum Pied Pipers project alongside fellow Detroit native Saadiq, Waajeed has already seen overseen one label operation in the form of Bling47 Recordings imprint, which released material from J Dilla under his Jaydee alias as well as Cubic Zirconia’s Tiombe Lockhart. Largely occupied with remix and production work over the past four years, Waajeed returns under the Jeedo moniker as head of the newly established Dirt Tech Reck imprint with a “quest to connect the roots of hip-hop and electronic music”.

A recent guest mix for Benji B’s Radio One show demonstrates just how much Dirt Tech Reck material the producer is sitting on and the label’s mission statement of being the “bridge connecting all things Detroit” is encapsulated perfectly on the debut release from Electric Street Orchestra, which is produced by Jeedo himself and “brings together a constellation of Detroit’s sonic masters”. A Side production “Scorpio” was done in collaboration with Underground Resistance duo Mad Mike Banks and Chaos aka UR-043, while the flip has “Master Funk Association”, a heady cast of collaborators in Theo Parrish, La Vida boss Andres and The Rotating Assembly’s resident guitarist Duminie DePorres.

DTR-01 by Electric Street Orchestra is set to arrive imminently in both limited one off silk screen jacketed, hand numbered editions and standard editions. We’ve embedded the B Side track with Parrish, Andres and DePorres for you to indulge in – do check that Benji B takeover too!