Jam City – How We Relate To The Body 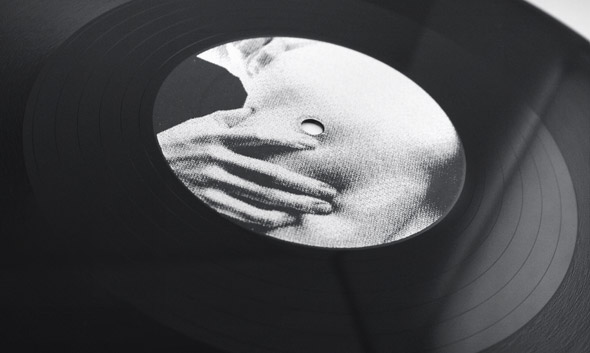 If you’ve read about this year’s debut album from Jam City, you’re likely familiar with Jack Latham’s stories of how the album was inspired by a real-life stint as a corporate spy for a well known athletics brand. Dig around a bit, and you’ll hear about how he designed futuristic prototype chrome body extensions that were shelved at the last minute, or played Kevin Saunderson tracks to a group of oil barons in a mansion in the outskirts of Paris.

I’d argue that whether or not these bizarre vignettes are truly autobiographical is irrelevant – Latham’s stories are powerful because they tap into a kind of Lynchian subconscious of the dance floor world, dropping breadcrumbs and cryptic images that we’re left to assemble on our own. The same could be said for the arresting imagery accompanying the release of Classical Curves: an unattended cell phone next to a water fountain, the lobby of what might be a dystopian mega mall in Dubai, an abandoned motorcycle lying on marble tile. These images poke at nerve bundles in our consciousness, raising more questions than they could possibly answer.

In contrast, the image that the How We Relate To The Body 12″ gives us is straightforward – a fleshy close-up of an unclothed thigh firmly gripped by a hand. If Classical Curves was about tapping into an intangible dream world of corporate espionage and broken glass, this time around it’s about the body, movement, the dance floor and pure instructional physiology. If “How We Relate To The Body” sounds like the title of a high school Sex Ed textbook, it’s because it’s not far off – a set of instructional commands to be carried out between the dance floor and your physical self. Simmering with a combustible energy, snares and gravity defying kicks fluidly intertwine as they careen towards a climax. When the enveloping dancehall reverbed stabs finally drop, it’s clear this is a track designed to echo over a room of nearly touching sweaty bodies.

By contrast, the first minute and a half of the album version of “How We Relate” was presented as a muffled backing track to a rave, drowned out by chatter and laughter. Here on the 12″ mix, that idle chatter (that may or may not have been a subtle tip of the hat to Daft Punk’s “Revolution 909”) is gone, replaced by shimmering synth hits that oscillate between tense, excited sexuality, industrial immediacy and the physical sensation of getting slapped in the face by a wave of humidity when you walk into a crowded club.

However, while “How We Relate” is one of Latham’s most openly titanic tracks, there’s still a stripped down restraint present, notable in the ethereal bursts of smooth piano darting in and out at the edges of the track, teetering on the euphoric but ultimately pulling back into something a little grimier: even in the most body-oriented of Jam City tracks, there’s still a furtive glance shot over the shoulder before getting lost in the crowd.

On the flip, “Now We Relate” elicits an equally powerful call to the dance floor, a nine minute ecstasy epic that revels in the repetition of a few seconds of bursting, jubilant synth stabs backed by a hissing fog machine thrum that burrows deeper and deeper into your consciousness until it explodes into something else, bigger, more powerful. Though Latham states that he’s known to “shy away from very grand, euphoric moments in music”, that’s exactly what you get when the five minute mark arrives, and everything collapses into a snapshot of kick drum induced club ecstasy, complete with a churning surge percussion that’ll send shivers up spinal cords. Unfortunately, nine minutes passes so quickly that the peak time drop feels like it’s here and gone, the joy unsustainable. It’s the only aggravating part of the track – it’s like being tipped over the edge of euphoria only to get elbowed in the ribs slightly after.

Latham has spoken about how juke artists like DJ Spinn can manifest a kind of melody that emerges in the space between sounds, a process out of the control of the songwriter where the sum becomes larger than the parts. That’s what’s at work in “Now We Relate”, and the track slowly, and infectiously develops its own potency, morphing into a mantra to “The Loop”. As the last original production from the LP sessions, “Now We Relate” is, according to Night Slugs, “a goodbye to the world of Classical Curves“, which will doubtless leave many followers wringing their hands nervously and wondering what’s next. Given Latham’s uncanny knack for making context-rich, evocative dance music that can transport you to weird places in your mind and body, asking “where’s next” might be the better question.