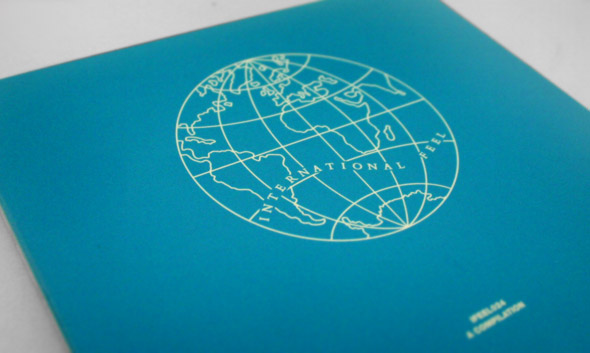 In these days of instant gratification, download-only imprints and hand-stamped white labels, it’s rare that a label comes along and does things properly. Whatever you think of the music delivered by Mark B’s International Feel label, there’s no doubt that he’s done things properly. From the start, he had a vision of creating a label that would do things the right way. That meant paying artists advances – a rarity in this day and age – creating strong branding and making every single vinyl release extra special. Usually, that meant high quality artwork that ensured that every release looked fantastic.

As a result, International Feel releases are rarely less than hugely desirable. Mark B, like Factory Records’ Peter Savile and Trevor Jackson of Output, understands the importance of product. It sounds cynical, but it’s easier to sell a good product. You barely need to hype good products; just release them and watch them sell. For the most part, International Feel releases have sold well, in some cases very well. One, the ludicrously scarce “Adventure Party” by the Globe, practically sold out before it had even had a chance to reach stores. Then again, only 130 copies were ever pressed up.

Of course, good product and shrewd marketing means nothing if the music is sub-par. For the most part, the music released by International Feel has been top quality. Inspired by the original Balearic ethos of “anything goes”, Mark B has carefully built up a catalogue that includes wonky electronica, stoner dub, dreamy folktronica, shimmering nu-disco, thick Afro-disco freak-outs, bombastic post-punk oddness, psychedelic mood music, glistening downtempo curiosities, fuzzy analogue electrofunk and, of course, nu-Balearica. Oh, and records by DJ Harvey – under the Locussolus moniker – that defy easy categorization.

All of these disparate musical styles are represented on International Feel: A Collection, the label’s first – and possibly last – compilation. Predictably, it’s as impeccably produced and packaged as you’d expect, and somehow holds together despite its curator’s wilfully eclectic approach. Highlights are naturally plentiful. Check, for example, the druggy beauty of “American Dreamer” by Maxxi & Zeus (a side project from Quiet Village boys Joel Martin and Matt Edwards), the wide-eyed, piano-laden blast-from-the-past of Coyote’s remix of International Peoples Gang, and the camp Italo-goes-Balearic of Boys from Patagonia.

All the label’s familiar artists are represented. Mark B himself delivers a number of twinkling cuts as Rocha, there’s a chance to revisit Gatto Fritto’s brilliant “The Curse” and “The Collage” (both latter-day classics, we’d argue), and Hungry Ghost delivers the album’s oddest – and, arguably, most exhilarating – moment in the shape of “(I Am A) Series of Strange Loops”. There’s also a rare chance to enjoy the previously vinyl-only downtempo excursions of IFEEL Studio (presumably Mark B under another pseudonym) and a couple of stonking reworks of Locussolus material from Com Truise and beardy veteran Andrew Weatherall.

More excitingly for those more familiar with the label’s catalogue, A Compilation also features a clutch of rare and previously unreleased tracks. Of these, it’s undoubtedly Panda 88’s classic Italo-meets-house banger “You’re Gonna Miss Me” that most reverberates, though The Globe’s previously mentioned “Adventure Party” – an epic fusion of balls-out disco hedonism and nuggety acid house – pushes it close. Sadly, Mark B has hinted that the end may be nigh for International Feel. Having moved from Uruguay to Ibiza (via hometown Sheffield), he’s officially put the label on ice. If International Feel: A Compilation really is the label’s last hurrah, it’s a terrific way to bow out.