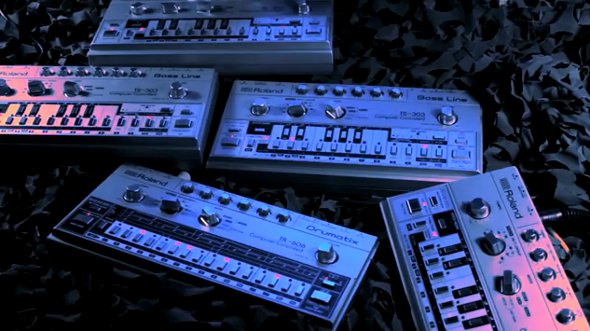 Andreas Tilliander will embark on a conceptual journey through classic Roland machinery on his forthcoming album for Kontra Musik, set for release in January 2013.

Well regarded for his musical endeavours as Mokira with numerous albums on labels such as Kontra, Raster Noton, Type and Mille Plateux, Tilliander is a fan of aliases and this newly formed TM404 project explores his passion for Roland’s TB-303, TR-606 and MC-202 drum machines. A concept video, which you can view below, shows no less than four 303s and a 606 working in harmony – analogue fetishists should perhaps take a seat before watching this.

Ahead of the album’s release, Kontra will release a two track 12″ featuring remixes of TM404 material from Morphine Records chief Morphosis, aka Rabih Beaini. It’s a fine choice – Beaini is well acquainted with the more esoteric corners of the dance music world, and, according to a Kontra press release, he approached the task with the help of “his favourite Korg machines”, the MS20 and the SQ10.

The remix 12″, which is set for release next month, is earnestly titled TM404 – The Morphosis Korg Response, with the Malmö based label calling it their most radical release to date – no mean feat for an imprint that has put out some adventurous techno-laced fare from the likes of Tyler Friedman, Jason Fine and Tilliander himself in recent years. The press release also carries a quote from Beaini in which he describes the project as “quite challenging and not really ordinary dance music. I believe in moving forward with things, with whatever chances and possibilities I have, it’s my contribution to this world.”

Kontra Musik will release TM404 – The Morphosis Korg Response on vinyl on November 28, with the digital release set to follow on December 19.