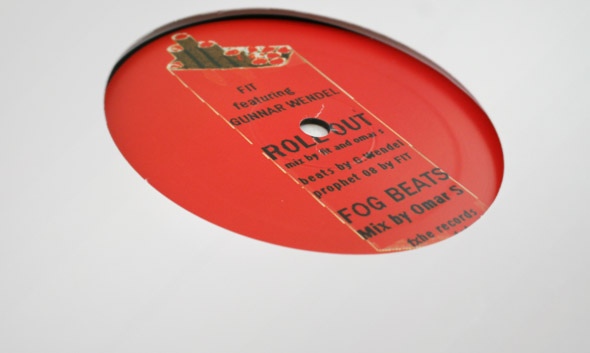 Aaron Siegel has thus far occupied an interesting space in the modern Detroit techno landscape. Building up his Fit establishment around distribution for the key labels in the Motor City has clearly placed the man in a strong position among his globe-trotting brethren. One look at the list of imprints he works with says it all; KDJ, Sound Signature, FXHE, Planet E, Underground Resistance, Three Chairs, NDATL, Moods & Grooves. We could go on. However, as a couple of releases for Omar S’s FXHE now attest, Siegel’s talents reach beyond logistics and business, and he appears to be making forays into the production world with some choice collaborative ventures.

On this twelve, Siegel is keeping fine company with the talents of Gunnar Wendel drafted in for two tracks of poised and rugged house music. Wendel is of course better known as Kassem Mosse, and you can certainly feel his influence in the slithering deployment of mid and top-end percussion on “Enter The Fog”, reflecting the enticing shimmer of his live sets. However it’s the keys that take centre stage here, as plaintive drops of raw piano chord intertwine with crystalline flecks from other analogue sources, while a mildly morose bassline plods out a sombre anchor to the refined proceedings. It’s a track crafted with heart and soul, deploying house tropes and classical ideas in equal measure as a shining example of the deeper level dance music can be capable of reaching in the right hands.

The standard doesn’t let up on the flipside as “Roll Out” engages with a crunchy beat and some jazzy melodic inflections that sound positively Rhodes-y in nature. As with the last track, the lead-in proves to be something of a false start in lieu of the core tone of the track, which reveals itself in a seductive bassline and utterly magnificent chords that chirrup in the most tightly packed of ways, before companion notes come in at different rhythmic angles to enhance the sparse refrain. With each element, from the considered drum patterns to the individual layers of synthesised sound, rendered so beautifully in the mix, you’re left with a staggering grip on exactly what has gone into making the track and the effectiveness of such simple and tangible craftsmanship. Just as those minute details can charm and beguile though, pulling back to take in the entire track reveals an alluring concoction of deep house gentle enough for the start of the night but pert enough to hold its own in the smaller hours.

To top it off, Wendel has some bonus drums in store on “Fog Beats”, which provides a neat tool for anyone craving a greater focus on the arcane rhythmic concoctions that the man like Mosse is capable of. It’s a fine example of how, for all the emotionally charged tones and spiritual leanings, Siegel and Wendel still had the floor in mind when they made these tracks, and they succeeded in reaching both levels without seeming to break a sweat.