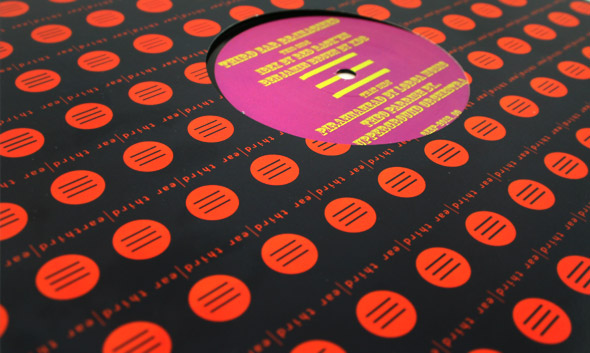 Third Ear are a comforting proposition in a scene littered with brash new upstart labels, high-concept imprints and artist-run ventures. Guy McCreery’s venture is a label’s label, if such a thing could ever exist, steered by one man with a clear vision for house and techno informed by Detroit but never in deference to it. Over the years plenty of the Motor City greats have appeared in various forms, from Mike Huckaby to Theo Parrish, Mike Clark to Kyle Hall, but the remit of the label has reached out to artists from all over the world. It’s hard to pinpoint the exact sound that defines Third Ear; it’s better considered as intangible, much like the output of the city that inspires it so.

Now this four-track release brings together an interesting spread of artists snapped up to deliver remixes of their favourite Third Ear cuts from the back catalogue. What’s notable about three of the four selections made is that they feature politically charged vocal turns. Draw your own conclusions on what that says about the remixers or the times we are in now, but it seems like an interesting coincidence when the artists were given free rein to pick their subjects. Red Rack‘em leads the charge by taking on Ibex’s “Spiritual War”, staying faithful to the essence of the original with its nervous keys and forthright postulations on “the system” and those within it. However, the rolling, psychedelic feel of the original gets punched into a far leaner machination, stripping back the blurred lines while dropping in some mean rhythmic decoration to create an equally punishing but thoroughly respectful version.

Taking a more dramatic approach to his steed, XDB rebuilds Benjamin Brunn’s “No Kicks” from the ground up, taking the beatless ambient wash of the original and replacing it with a taut, mechanical stomp. It’s a warm, analogue approach that works perfectly, providing a backdrop that manages to stand far back enough to let the powerful speech against life’s cop-outs ring true with all its force, whoever the woman behind said speech might be. While it’s unfussy as a track, the dominant vocals need such accompaniment. Representing the newer breed among the remixers invited to the release, Lorca sounds right at home among the more wizened surroundings at Third Ear. Where Pirahnahead’s original “Self Conscience” was a strange, piano-led house cut with an underlying exotic flavour, the up and coming Brighton producer has taken a more austere route characterised by booming analogue drums and nail-biting pads, while the spirit guide narrator keeps intoning in a pitched down drawl about everything being OK while the track makes you feel it clearly isn’t.

Perhaps the most ambitious and downright exciting adaptation on this EP comes courtesy of the Upperground Orchestra outfit fronted by Rabih Beaini, better known as Morphosis, who was already planning a live interpretation of Theo Parrish’s classic “Falling Up” before Third Ear even approached him. The end result, recorded in Italy a few months ago, is free-flowing jazz at its finest, capturing the core ingredients of the original and letting them work into the piece at opportune moments rather than creating barriers to the creative flow. The EP stands as a stoutly strong selection of tracks that highlights Third Ear’s ethos neatly, with artists new to the label who clearly understand what it stands for. It perhaps would have been interesting to see a few more reaches further back in the catalogue, but the freedom afforded to the remixers undoubtedly yields better results than forcing them on to a track they may have no affinity for. Instead, the feeling between remixers, original artists and label seems to be a continuous cycle of respect, which is no bad thing.