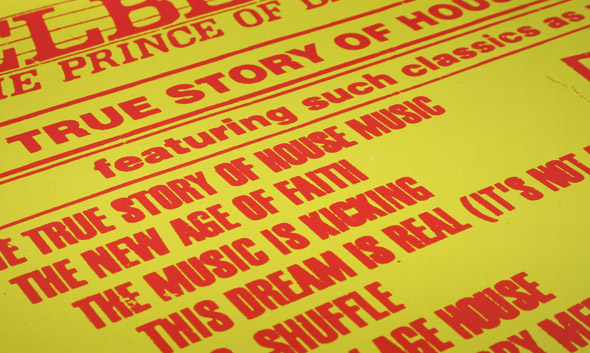 Lamont Booker was a “street kid” and jazz drummer from New York whose efforts to re-define the scope, style and shape of house music during the genre’s halcyon age for many years went ignored. How much that can be blamed on his obsession with using a multitude of pseudonyms – Elbee Bad, LB Bad, The Prince of Dance Music, The Voodoo Man, Lord KCB, the list goes on – is open to argument; either way, it’s high time his contribution to New York house music’s history was re-appraised.

The True Story of Dance Music (The Prince of Dance Music) is Rush Hour’s effort to give him his due. Like previous retrospectives from the acclaimed Dutch stable, it does a formidable job of joining the dots between the many strands of his curiously stop-start career between 1988 and the early ‘90s. Predictably, it paints a picture of a producer for whom deep house was often the starting point, but more often than not merely the means to an end.

Arguably his most famous piece, “The New Age of Faith”, is barely house at all in its purest sense. It later formed the basis of Sabres of Paradise’s timeless “Smokebelch II”, now a staple of Balearic and ambient sets (particularly in its Beatless Version guise). Booker’s original is a near perfect slice of beatless electronic music; closer to jazz than house, it’s a beautiful concept piece that bristles with melodic intent from start to finish. It was originally featured on a curious, Burrell Brothers-era Nu Groove EP that also boasted “The New Age of House”. With its spoken intro and string-drenched nod to both US garage and original Detroit techno, the latter remains an inspirational piece of vintage deep house. While its twittering synths and odd mastering date it, “The New Age of House” still sounds remarkably fresh.

Booker’s relationship with Nu Groove was only ever fleeting, and he popped up on a myriad of labels in the late 1980s and early 90s. Sometimes, it was with a hissing chunk of basement-friendly hip-house (check the fluid, reggae-sampling bump of “I Like Ti Move” or the stripped-back, piano-and-rap of “I’m So Alone”), at others with a nuggety acid track featuring those trademark spacey synths (“Just Let Your Body Ride”, here in the form of an unreleased mix, or the Mr Fingers-ish “The Music Is Kicking”).

More often than not, though, his releases focused on a brand of analogue deep house that prioritized mood and melody over the pleasures of hypnotic rhythms. The True Story of House Music is jam packed with prime examples. There’s the bittersweet melancholy of “S Shuffle”, the delay-laden bliss of the previously unreleased “E7 E9 (Get Krump)” and the glorious simplicity of “Mr Terry Meets Mr Fingers”. Best of all, though, is the Body Mekanix Authentic Garage Groove version of “The True Story of House Music”. Within its seven minutes, you’ll find all of Booker’s trademarks; the hustling analogue drums, the plaintive chords and subtle melodies, even his penchant for speaking grandiose nonsense over the hissing grooves. It’s like a summary of his early career in one track. There’s no doubt that much of the material on The True Story of House Music feels dated, but that’s hardly a criticism; crucially, Booker’s startling early work still has a depth and resonance that should make it essential listening.