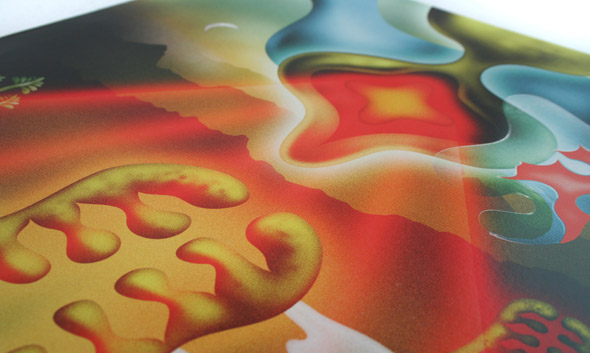 We’re kind of at a loss where to start as there were just so many good records released this week.

FXHE’s return to 12″ duty after a summer break is a good place we guess, especially since it featured the enviable talents of Kassem Mosse and Aaron FIT Siegel as well as some mixdown assistance from Omar S. Brandishing three tracks that sit defiantly within the label’s canon specifically because they sound like little FXHE has released previously, “Roll Out” is our personal favourite, a real carpet burn of a track that ascends deftly from the pert and primed drums into a thoroughly sexy concoction of gorgeous lead synths. Equal in our affections was Cabrini Green, the second emission from Glasgow’s Dixon Avenue Basement Jams with the unknown Marquis Hawkes at the helm – four tracks that brush between various shades of techno and house and end with the riotous “Sealion Woman” – familiar to anyone who checked Kodiak’s podcast for us as well Pangaea’s epic RA mix and sounding even more druggy when nudged down to -3 on your 1210.

Remaining in the fair city of Glasgow, Numbers paid homage to their techno upbringing with the reissue of Multi Ordinal Tracking Unit from Unspecified Enemies, a late 90s techno track described by the label as “a secret weapon and personal favourite”. Conceived in a North East London bedroom with the most basic of equipment and subsequently embraced by high profile Techno DJs in Detroit and the UK, the Numbers troupe had the hard edged funk of the track ingrained on their collective young memories by Rubadub’s Club 69 resident Martin McKay and we get the feeling the label were itching for a chance to reissue it. Ostgut’s 12″ issue of three tracks from Nodge’s excellent Berghain mix, Emptyset debuting on Raster Noton with a suitably visceral excursion into white noise, Roman Flugel remixing Leonid Nevermind on Argo sub-label Stolen Kisses and John Heckle’s mate Mark Forshaw debuting in style on Tabernacle with a quintet of raw analogue techno throwdowns are other notable techno 12″s this week.

Bored of shit! That was the amusing central motif to the return of Dollskabeat, part Scot, part Belarussian, part Space woman and returning with altogether more jacking fare some three years after her smoky, noirish Italo pop debut on Optimo Music. Cocking a snoop at the rather poor state of popular culture (and one high pant wearing individual in particular) “Bored Of Shit” is a revelatory Chicago house jam in the mould of Firecracker releases, a feeling no doubt informed by bass playing from Fudge Fingas and the best remix by Vakula in recent memory. Elsewhere, Alex Israel added Seattle label Night Gallery to his growing discography with Wichetty Dreams an EP that was perhaps his most confident and diverse to date – check the title track that deftly joins the dots between house and hip-hop without sounding like hip house!

Our now regular L.I.E.S. mention in this column is dedicated to two releases that we feared would never escape the pressing plant hoodoo in the shape of the Hassan double pack from Professor Genius and Panther Moderns, Steve Moore’s epic science fiction 12″ soundscaping. Despite the delays, the eight tracks of Middle Eastern tinged meditative synth explorations from Genius aka Jorge Velez actually sound more connected to where L.I.E.S. is today than when it was first announced over a year ago and it’s truly a collection you need to spend some time with. Given the inherently vintage approach of Moore’s music, the delay has shorn little gloss from his three track release which someone should really sit Ridley Scott down with in order to persuade him to commission Steve to compose the OST for his mooted Bladerunner sequel.

Doing his thing, making sure he gets a paragraph all of his own is Pangaea with Release, the best album dressed up as a his double 12″ single release that we’ve heard in some time. As well as being one third of the Hessle Audio triumvirate, Pangaea – or Kevin McAuley to friends and fam – has also been responsible for some of the label’s best releases and this is right up at the top of the pile. Mixing tough, steeled-up steppers rhythms and dub techno textures across eight tracks, we’ve been searing the digital edges of Release for a few weeks thanks to concerted repeat listens and it’s an absolute pleasure to finally grip it on double plated format.

Fans of Minimal Wave we are and wince our wallets did as the label dropped no less than four all new releases as well finally repressing a much requested classic. Felix Kubin’s Teenage Tapes showcases how annoyingly talented the German musician was as a 13 year old (an age where crude felt pen depictions of dinosaurs was the pinnacle of this writer’s art) while The Potato Farm Tapes offers an illuminating insight into Ohama’s earliest technophobic productions composed entirely from his basement studio underneath you guessed it, a potato farm. The 1979-80 period of output from the prolific Japanese producer Symathy Nervous as documented on Plastic Love while Minimal Wave’s second favourite French band Deux returned with Golden Dreams, a four track transmission of unreleased and newly remastered material from the Lyon duo with final track “Fam Fam” closest to recapturing the magic of our favourite Duex jam “Game & Performance”. Having heard the likes of Smagghe, Weatherall and Fairplay dropping “Take Me Away” we’re quite happy to finally own Das Ding’s HSTA, perhaps one of Minimal Wave’s finest reissues in their illustrious run thus far.

On the repress front, you might want to check the mind mangling brilliance of Le Jardin Des Chemins Bifurquants, a two track 45 minute explorative piece from Hieroglyphic Being that was originally released last year in limited quantities by Belgian label audioMER last year and finally repressed. Working around a concept that plants have a religion (yep) Moss digs deep into the cosmos for an album that is possibly closest in execution to his considerable personal influence Sun Ra. It comes wrapped in some all too appropriate artwork from visual artist Robert Beatty of Hair Police fame – as you can see above.

Over at Juno Download, British imprint Third Ear dropped an ace EP of “re-imagined” classics from the label’s back catalogue. The producers involved were given the opportunity to select their favourite tracks to remix; Red Rack’em chose Ibex’s 2008 beatdown cut “Spiritual War”, XBD took on Benjamin Brunn’s kick drum shy “No Kicks” and left_blank producer Lorca remixed Pirahnahead’s underrated “Self Conscience”. The headline track however was a remake of Theo Parrish’s “Falling Up” by Rabih Beaini’s cosmic jazz outfit Upperground Orchestra.

There was also a hugely impressive album from Lukid for Werkdiscs; overall Lonely At The Top felt like a much more colourful record than his dark, muggy debut. The downtempo soul of “Bless My Heart” rippled with flouresence and the title track was like the squashed dubstep of his classic track “Chord” heard through a prism of flange, but it was the stumbling, Actress-like shuffle of “USSR” and the hazy 80s pop memory that is “The Life Of The Mind” that proved Lukid has a mastery of experimental shapes and oblique moods.

Elsewhere, Chicago’s DJ Spinn returned with more razor-edged footwork on Teklife Vol 2, while Brighton-based synth-step explorer Alan Myson (aka Ital Tek) dropped his third full-length in five years in Nebula Dance, and Fatima Al Qadir combined the experimental synth tendencies of peers like Ital, Oneohtrix Point Never and Laurel Halo with R&B influenced bass on the Desert Strike EP for Kingdom’s Fade To Mind. Staying in the bass realm, Jam City offered a club-ready addendum to his excellent LP Classical Curves. Featuring 12″ versions of standout tracks “The Courts” and “How We Relate To The Body”, dub versions of “Her” and “Club Thanz”, and an instrumental version of “The Nite Life”, the real gem was all new track “Now We Relate”. A nine-minute epic which stretches out Jam City’s hyperreal house like a piece of elastic, it constantly hovers on the edge of mayhem for what seems like an eternity. Rounding off the week’s digital releases was a killer split EP featuring Juno favourite Markus Suckut and Parisian producer par excellence Marcelus, an album of EBM and funk-infused electronic disco-pop from Comeme’s Mexican producer Daniel Maloso and the second instalment of the Subtext Live series featuring a collaboration between Roly Porter and Cynthia Millar recorded live in the Britten Studio at Snape Maltings in Suffolk.

CD of the week came from the International Feel imprint, which, after three years and some 30-odd releases, is being put on ice. While it may return in future (label boss Rocha is deliberately vague about the details), the excellent two-disc set entitled A Compilation has been designed to bookend the story so far. As well as familiar favourites from the likes of Locussolus (AKA DJ Harvey), Gatto Fritto, Bepu N’Gali, Hungry Ghost and Flights of Fancy, there’s a couple of unreleased originals and remixes. There’s also the chance to get hold of some of the label’s rarest, previously vinyl-only material, including Panda 88’s excellent “You’re Gonna Miss Me” and the near mythical “Adventure Party” by The Globe, an essential acid-disco stomper.