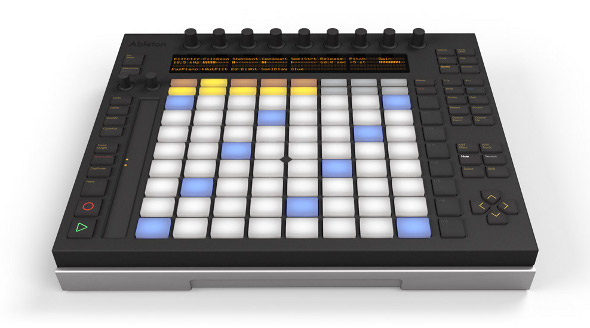 Ableton have just announced details of Live 9, the latest version of their popular music production and performance software, as well as an all new hardware controller, Push.

Not coming as much of a surprise – Ableton accidentally uploaded a video of Live 9 to their YouTube account a few days ago which was promptly copied and leaked – the news nevertheless ends years of speculation as to what Live 9 would feature and when it might arrive (Live 8 was released back in April 2009). Gaining criticism for their incremental updates in previous years, Ableton look to have addressed those concerns with what looks to be the most significant set of changes to the software for some time.

Top of the list is automation recording in the session view, allowing improvised ideas to be captured more easily on the fly (curved automation has also been added), while a new browser allows a more user-friendly way or organising and finding instruments and samples. Live’s studio effects – Compressor, Gate and EQ Eight – have also had a redesign, with clearer displays; they are joined by an all new analogue modelled compressor called Glue. Incredibly, the new Live also has a tool allowing audio to be converted to MIDI – meaning that in theory a drum loop could be converted to MIDI and reused with your own drum samples. Finally, Max For Live – the powerful tool allowing you to create your own instruments and effects for Live – is now included in the Live suite; it was previously a costly extra. An overview of the new features can be seen in the video below.

As well as Live 9, Ableton have unveiled an all new controller for the software – Push. Developed with Akai, and looking like a cross between Native Instruments’ Maschine and Novation’s Launchpad, and featuring 64 velocity and pressure sensitive pads, encoders and a touch strip, it functions as a tool for playing beats live, step sequencing, and for adjusting instrument and effect parameters. Undoubtedly one of its most interesting features is the controller’s ability to show only the notes in a given musical scale – something that will be invaluable to the less musically inclined. Those with older versions of Live will be disappointed however – Push will only work with Live 9. The features can be seen in action in the video below.

As yet no release date has been announced beyond the first quarter of 2013 for both the software and Push controller, but the Push controller will retail for €499. Live 9 meanwhile, will be available in Intro, Standard and Suite flavours, costing €79, €349 and €599 respectively – upgrades will depend on your current version of Live.

It’s worth mentioning that those who upgrade to Live 8 now will receive a 25 per cent discount, and will get a free upgrade to Live 9 when released, which may well save money in the long run. Full details are available at the Ableton store, while those wanting a more comprehensive tour of both products should head to Ableton’s homepage.