Dusted Down: UR – Dark Energy 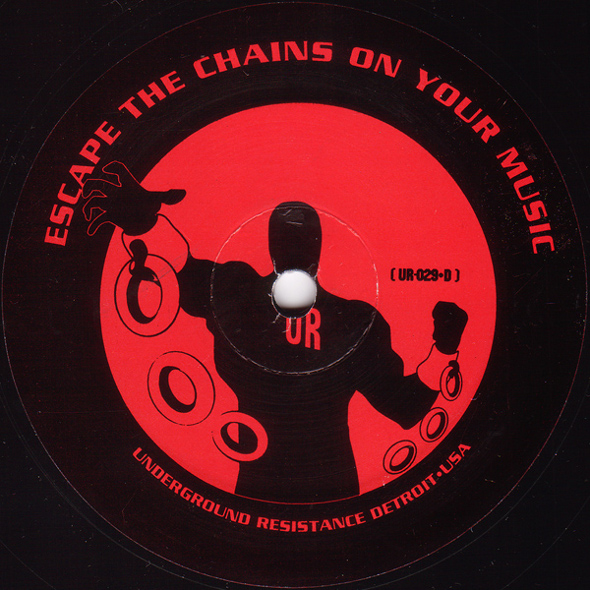 Released in 1994, Dark Energy sees the UR label at a crossroads. Following in the wake of the white knuckle intensity of the collective’s Acid Rain, Suburban Knight’s eerie Nocturbulous Behaviour and the otherworldly jazz of Galaxy 2 Galaxy, it paved the way for many of the keynote releases on the label as the 90s progressed, including Electronic Warfare, Aztlan and The Turning Point. Remaining true to their love of grandiose statements, UR said about Dark Energy that it is “the first in a series of sonic strikes engineered by UR to be carried out during the winter equinox of star year 1994-1995, against programmer strongholds”.

Irrespective of whether one takes the Detroit collective literally and believes every word of their manifesto, or merely wants to marvel at their music, Dark Energy proved to be a benchmark release. The production credits are divided between Mad Mike, UR and Suburban Knight, with UR’s “Atomic Witchdokta” diverting most radically from the previous Underground Resistance script. Over a loose but firing tribal groove, the collective lay down a sassy funk bass and insistent percussion and in so doing, provide a peek into the future and a glimpse at where the influences for later boogie-heavy tracks like “Soul Circuits” would come from.

UR’s other contribution to the release, “Acid Africa (Roots Electric Remix)” is a meeting of the collective’s acid excess and electro-focused next steps, as gurgling 303 lines career against crisp, shuffling 808s. Mad Mike also contributes a track under his own name, something that only served to heighten speculation in a pre-internet world of the UR founder’s links to the Red Planet series for two reasons. Firstly, the Martian, the alias for the producer who produced the Red Planet series, is credited with mixing the two UR tracks on Dark Energy, but secondly – and more importantly – is that Mike’s track, “Stargate”, with its dark, droning groove, sounds very similar to tracks on the Long Winter Of Mars record, released by The Martian on Red Planet in the same year.

Apart from this mystique, Dark Energy also served to put Suburban Knight in the spotlight. James Pennington has always been one of this writer’s favourite techno producers, mainly because his music sounded so menacing and machine-like. Pennington was one of the few producers to flip the techno cliché about machines with soul on its head. “The Art Of Stalking” and “The Groove” still sound so coldly rational and menacing that it was impossible to conceive that they could have been made by anything but a streamlined, functional machine, albeit one programmed to be utterly malevolent. When you listen to “The Art Of Stalking” or “The Groove”, the images either record conjures up are not fantastical space travel but rather buildings in an urban centre on fire and stealth bombers delivering murderous payloads.

On Dark Energy, he lives up to his name and sonic reputation with “Mind Of A Panther”, where the sound of the wind whooshes through a blacker than black droning groove. “Mau Mau” meanwhile, marks something of a departure. It recounts the fate of the tribe in the title and its percussive groove points to the approach used by UR in later tracks like Aztlan. Admittedly, it’s not as breathtakingly austere as “The Art Of Stalking” or “The Groove”, but its droning, merciless bass shows that Pennington had not fully abandoned his strike tactics. The same can’t be said about “Midnite Sunshine”. Undoubtedly Pennington’s happiest, most uplifting track, its provenance, according to a post on Discogs, came from a description by his father who served in World War II about the way that German flares made the night sky brighter than midnight sunshine. With its near 12 minutes of stop-start housey beats, jerky rhythm and the kind of joyous string and synth melodies that only “Hi Tech Jazz” could muster, “Midnite Sunshine” is another side to Pennington’s interpretation of ‘dark energy’ unrevealed until this incendiary double pack arrived.