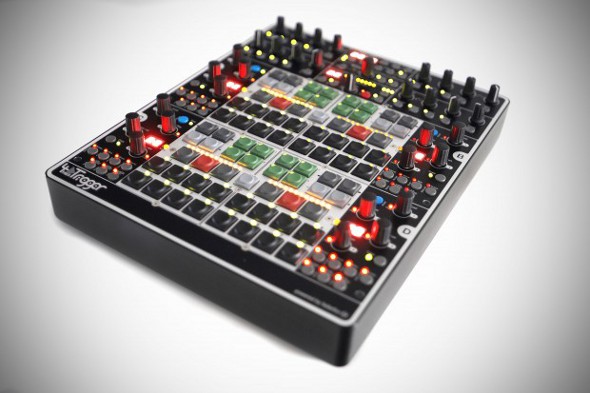 The 4TrackTrigger is a high end MIDI controller designed to assist in getting to grips with Native Instruments Traktor.

There’s a very straight-forward feel about the controllers that have come from the Glanzman stable. Although they have only produced a few units to date, there’s a boutique and dependable feel that seems to fit the positive stereotype for things designed and manufactured in Switzerland.

Although they are a relatively young company, Glanzman have partnered with Germany’s Faderfox to bring their heavy duty controllers to life and they’ve chosen well; Faderfox have been designing and producing their own line of miniature DJ MIDI controllers successfully since 2004. Having been influenced by the popular Traktor DJ software and the possibility of mixing with four decks, it became clear that the two deck controllers were in need of an upgrade, and so the 4midiloop Track Deck was born.

“The casing is milled from a single block of CNC shaped aluminium – the same is used in the Swiss aviation industry – and with a scratch-proof faceplate, the heavy duty build quality of this unit quickly becomes clear”

Following on from the four deck controller concept, the 4TrackTrigger is the latest dedicated Traktor controller made by the German/Swiss partnership. It’s a compact and uncompromising unit positioned at the professional end of the market, with a limited production run planned and a price to reflect this. The casing is milled from a single block of CNC shaped aluminium – the same is used in the Swiss aviation industry – and with a scratch-proof faceplate, the heavy duty build quality of this unit quickly becomes clear. Almost all of the functions within the Traktor software are mapped to one of the control surface’s array of knobs, buttons and encoders, which are laid out in an intuitive way, mirroring the exact layout you would see on screen. There are six LED screens displaying everything from the master clock tempo to the loop lengths of individual track decks, and every function button has an LED to display its current value and status.

Installing the latest .tsi mapping for Traktor is easily done with the CD included in the box. However if you lose the CD or need to reinstall because you’ve upgraded your computer, then you have to visit the 4midiloop website to download the .tsi file. (You can also get the installation instructions on the site, as well as comprehensive users manual.) One of the things that strikes you after firing up the 4TrackTrigger is how easy it is to browse music and load tracks on to a deck. Syncing the decks and setting a master tempo is done by using the cursor buttons or tapping the tempo via the dedicated button. 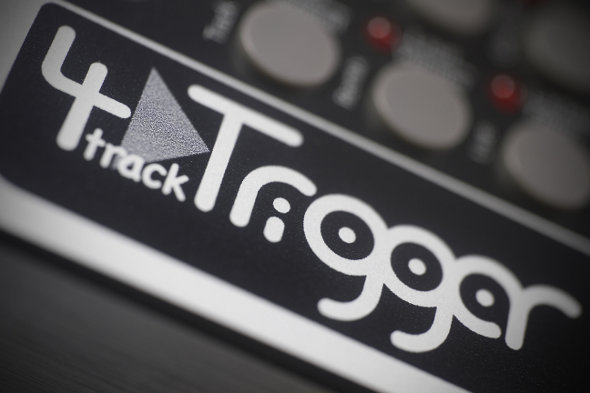 On further exploration, some of the more extended functions were not as obvious as they could have been. Turning on the FX section or browsing and selecting the FX for any of the four slots wasn’t simple – you need to learn a key combination to get the desired result. Because Traktor offers so many functions it’s probably inevitable that the majority of the controls have dual function, and to make things easier each control has been labelled with primary functions written horizontally, as you would expect, and secondary functions vertically. The secondary functions can be implemented by holding down one of the two shift buttons, which allow you to operate a secondary function with one hand in a practical manner.

There are 78 heavy duty keys for controlling the pitch bend, FX assign, hot cue and sample deck trigger. All of the knobs and endless push encoders are chunky and feel satisfyingly robust. It’s easy enough to change loop lengths and search through tracks, and there are some nice touches added; for example, to change the amount a single knob turn seeks through a track, simply push the encoder down and twist to find the required amount. This makes fast, fine adjustments a painless operation. While using the controller, this writer also found there wasn’t a single point in which he had to abandon the unit in favour of the mouse and keyboard – undoubtedly a good sign.

The 4TrackTrigger is not the only Traktor controller on the market – Native Instruments’ own Kontrol F1 and Kontrol X1 both ship with full versions of Traktor Pro and feature backlit buttons, while Allen & Heath have the K2 controller, which brings soundcard technology into the mix. The 4TrackTrigger is larger than its rivals and doesn’t feature soundcard technology; on the up side, there are less complicated layers of control as it has been organised with the tactile control of four decks by one unit in mind. As it’s a MIDI controller it can be mapped to any number of different software packages (a feature that can be found on its rivals as well). The only niggle here is that it is possible to accidentally knock the mode keys, causing a deck to stop mid set. This, however, is the only serious concern on a controller that is generally well spaced out and logically organised.