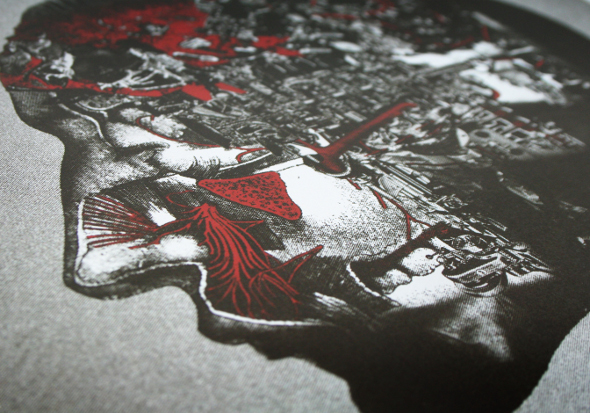 As anyone who may have read their recent interview with FACT will know, Old Apparatus seem to be a collective with a desire to present themselves as a singular unit; going far beyond the cult of anonymity that many contemporary producers adopt, Old Apparatus wished only in the interview to be referred to as OA1, OA2, OA3 and OA4 – not only making the interview somewhat challenging to read, but seemingly placing them in the context of an experiment in musical collectivism where each member’s individuality is willingly surrendered. It’s interesting then, that Realise – the second release for their own Sullen Tone imprint – is the first of three EPs, sanctioned by the collective whole and produced by individual members of the group. Attributed only to “LTO”, it provides an intriguing way of presenting one of the group’s individual influences.

For a collective that rose to prominence on a dubstep label, and is known for weaving a patchwork sound out of knackered sub-bass, industrial death rattles and the ambience of post-punk and classic 4AD records, opening track “Chicago” is something of a surprise. With a piano refrain and 4/4 kick that references the house music of its namesake, you’re drawn into a parallel dimension of deep house, albeit one where Coki is the primary influence; its increasingly manic ivory rattle pushing against its growling low-end like two creaking tectonic plates pushing against each other. “Found” is the release of that energy; a lighter track in tone and rhythm, it hovers in some hinterland between calypso-infused reggae and Autonomic drum & bass, complete with percussion that rattles like a steampunk pinball machine; “Holding” expands on this, juxtaposing the breakbeats of classic 90s IDM with crawling drones and cavernous brass. It’s interesting that for a group whose sound has been characterised by its stifling fog of atmospheric pressure, “Holding” should display such mathematical precision, and like Drukqs-era Aphex Twin, it combines the antiquated with the wildly futuristic – something that is also evident on closer “Realise”, a swelling, synthetic composition that combines Medieval tones with the sounds of the rushing of air filling a vacuum.

Across the four tracks, the Old Apparatus sound is still intact – but there’s a more tangible synthetic element present; much like the record’s artwork, depicting a human head whose exposed skin reveals a matrix of sinew and circuitry, Realise is an arcane hybrid of inert flesh and electrical impulses. More than this however, the music functions like the cross-section lovingly illustrated on its cover, providing a new way of understanding the inner workings of this most close-guarded of collectives. If this truly is the sound of “LTO”, then it provides the most striking example of the Old Apparatus sound to date – and we should be particularly thankful that the collective has broken rank.