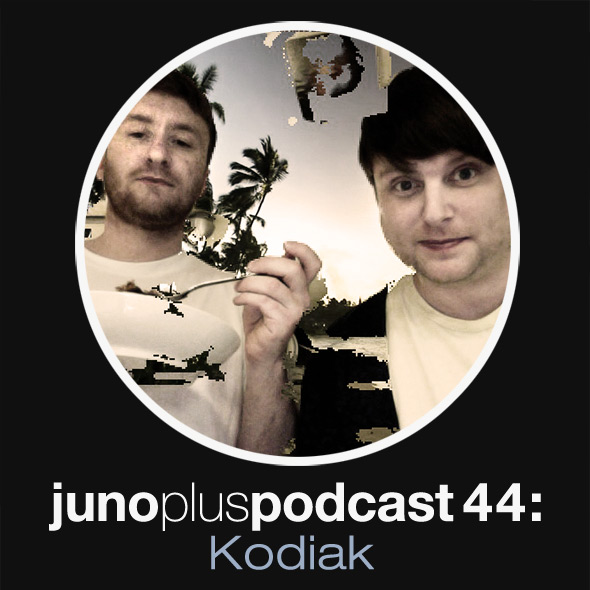 “Colour, blood, sweat and tears”: Juno Plus Podcast 44 is a raucous affair from Kodiak.

The cereal ravers (see photo above) debuted earlier this year with the excellent Spreo Superbus EP for Scottish collective Numbers, which featured a sprightly original production alongside remixes from Girl Unit and Actress. Providing all of the best excesses of rave with a knowing sense of humour, “Spreo Superbus” remains one of this year’s most incendiary club tracks, combining all manner of contemporary genre influences to create the sound of what can only be described as the sound of a Formula 1 car tearing through the dancefloor. This week they arrived on the fluorescent London imprint Unknown to the Unknown, providing a high-octane remix of Capracara’s  “Ronin”, turning the old-school house of the original inside out and drenching it in a neon glue.

Although aligned to the world of bass music, Kodiak – otherwise known as Jamie Kingett and Mark Rutherford – have an individual sound which transcends the world of limp future garage and anonymous Burial clones, creating futuristic club music in the truest sense of the word, seeking to confuse, disrupt and excite the listener with unhinged, psychedelic elements. Having admired their unique aesthetic for some time we thought it about time to coax a Juno Plus podcast out of them, and they were happy to oblige, providing an hour-long mix veering from the incandescent rave of I:Cube and raw house of Marquis Hawkes, through the grimier and funkier end of the bass spectrum, with cuts from Champion, Visionist and Massacooraman, to the high-tempo electro of Photodementia and juke of DJ Rashad.

In addition they answered some questions we threw at them about the origins of Kodiak, how they came to release on Numbers and their favourite breakfast cereal.

Can you tell us a bit about the mix – how and where was it recorded?

Jamie: In my bedroom with vinyl, Traktor and a cup of tea. I didn’t drink the tea. We stuck the result in Peak and crushed it up to make it really loud.

Mark, some cursory Discogs digging has revealed that you have production experience going back to 2005. What path led you to form Kodiak with Jamie?

Mark: We’d known each other for a while before we tried to do tracks. We like loads of the same music, not just club stuff. I was doing remixes and my own material but it was way too weird to put out. Around 2007-2008 there was a definite flourish of sonic exploration in the UK. That period after the dubstep boom seemed so positive and forward-thinking, it inspired us to get together and put down some sounds. It was brilliant to work with Jamie because he had really fresh ideas and was way more clued-up on the scene than me. We did a remix first and it turned out good so we carried on.

Jamie: It was bonding over stuff like Untold’s “I Can’t Stop This Feeling/Anaconda” release on Hessle and Shortstuff/Mickey Pearce’s “A Rustling” on Ramp. Records like that which were bursting with this manic energy and inventiveness that inspired me to get back into production.

You first appeared on the radar of many with the release of Spreo Superbus on Numbers back in March. How did the hookup with Numbers come about?

Mark: I used to work at a music distributor and I sold records to one of the Numbers guys who did the buying at Rubadub in Glasgow.  I sent him a demo of “Spreo Superbus” to see what he thought.  He reckoned it had promise and played it to the other guys.  We honed it down a bit and they agreed to put it out.  It was a real touch because we love the label and it was totally right for what we were doing.

Jamie: Their releases individually on Stuff, Wireblock and Dress 2 Sweat were all essential and Jack and Spencer’s DJing reminded of the sort of inclusive and effortless selections that got me into it all the first time round. It was that combined with those tweak-a-holic mixes that made me think yes – these are the sort of people I want to be associated with.

Both “Spreo Superbus” and your Capracara remix stand out for their high-octane, technicolour feel – our writer Oli Warwick described it as “constantly straining at the leash to reach a crescendo”. Although UK funky and grime are undeniable influences, there seems to be an element of something else at play. Were you into early 90s chart rave in your collective youths or is there another reason your music is so gleefully unhinged?

Jamie: We want to excite ourselves. Moments that give you that sea sick feeling and element of appealing confusion that I got from jungle and hardcore raves in the 90s. It’s not my only interest but it’s what captivates when it comes to the dancefloor – colour, blood, sweat and tears. Proper psychedelic shoegaze and glacial 80s pop a la 4AD etc. are definitely an influence when it comes to the sonics, seas of reverb and dreamlike delay trails; something like Robin Guthrie producing a UK Funky record. Although that would be terrible! Some chart music as well which – at it’s best – is astounding in its clarity and immediacy. I also have a soft spot for a good trance record, it’s true.

Mark: The Kodiak sound is deliberately out-there and psychedelic. I’m really into harmony and dissonance, I love it when things are out of tune or go out of tune. Fuzzed-out punk and psyche rock, lots of experimental and drone stuff, the more trippy end of disco, some industrial and definitely lots of crazy-ass mid 80s house and acid.  We’re also massively influenced by hip hop and r’n’b, those records are so urgent and they sound amazing.

The Numbers release was also notable for the imaginative reworkings from Actress and Girl Unit – was choosing them your decision and what were your impressions of the results?

Mark: We asked Numbers to ask Girl Unit because we loved his tracks.  We absolutely love Actress too but never thought to ask him, luckily Numbers did it anyway!  We were both made up, the remixes were great and really complimented the original.

Jamie: Two of the best and most individual producers around – perfect.

Of all the tracks on the mix, Marquis Hawkes’ “Sealion Woman”, forthcoming on Dixon Avenue Basement Jams must come as the biggest surprise. Do you have any other current favourites in the realm of raw analogue house?

Jamie: Everything Tadd Mullinix turns his hand to turns out gold but i’ve been working my way through his back catalogue as James T. Cotton. It’s incredibly difficult to capture not just the sound but also the primal vibe of 80s jackin’ house but he manages it every time, especially as 2am/fm with D’Marc Cantu. Tracks like “Poison Dart”, “Got to Let You Know” and “Beat Ya!” are absolute beasts. Make more tracks goddamit!

Your mix is also rich with music repping the grimier and funkier end of the bass spectrum, with tracks from labels like Body High and Fade To Mind in the US and the likes of Visionist, Mickey Pearce and Champion from the UK. Are there any other names and labels you’re feeling from that cross-section of music at the moment?

Jamie: Other than in the mix, UK grime producers Spooky and Preditah, Henny Moan and a London (I think!) producer called Sophie who should hopefully have some releases out soon. His tracks are amazing, incredibly fizzy and vivid with an abrasive stark brashness but so pop it hurts. I want to start a label just to put out his tunes!

What have you got coming up next?

Jamie: We’re playing at Corsica Studios with Benji B and Martelo 27th November part of the MAKE NOISE series of events.

Jamie, in your press pic you are munching on what appears to be a bowl of cereal – what’s your favourite?