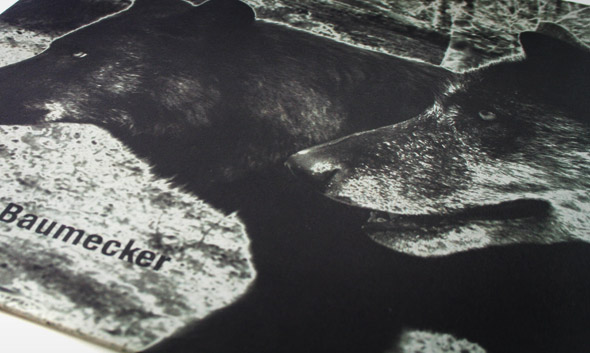 With an air of surprise about them, Barker & Baumecker come bowling into earshot with a potent techno formula that eschews tradition just as it ably imbibes a broad range of influences and styles. Ostgut Ton is typically recognised as a home for more delinated electronic music, not constrained to Berghain techno but generally quite singular in its outlook whatever mood it aims for – this is not the case with Barker & Baumecker.

It’s hard to get a firm grip on Transsektoral at first as it slips and slides through varying structures across 11 tracks, but there’s no doubt that a strong diet of techno underpins proceedings. At times it’s inescapably apparent, as on the lush Detroit tones of “Trans_It” or in the more primal industrial construction of “Buttcracker”, but other times it exists more as a spirit guide, advising the direction of the music rather than dictating it.

The album certainly twists and turns with a wonderful unpredictability, starting off in more reflective tones on the opening tracks before settling into a perfectly executed groove on “SchlangBang” that sounds like garage being stripped of its champagne ego and reformed as a self-deprecating replicant, not least in the devastating bassline that rumbles at the core of the track. “NoBody” takes a more direct approach to garage but still manages to stop short of an obvious end point as the spacious beat darts ever out of view. “Tranq” provides a completely different slant, delving into a metallic kind of ambient track that revolves around dub-weighted chords and pummelling sub without the drums to anchor it. Despite the implied coldness of the track, there’s actually an uplifting tone to the melodic content, as heavily treated as it is.

It may sound like B&B have spread themselves thin on this record, but it’s not the case at all. It’s quite remarkable how fluid the progression of the album is, and it’s made no more apparent than on the rousing crescendo of final track “Spur”. It sounds just like a last song should, sad for the closing of proceedings but imbued with a sense of relief and joy. That these emotions are conveyed in textured and refined synths without a whiff of corniness about them is no mean feat, and it’s a trick that has been nailed in every individual and unique corner of this storming long player. It feels like an album should, gliding from downtempo tracks to bangers without ever showing where the split is.