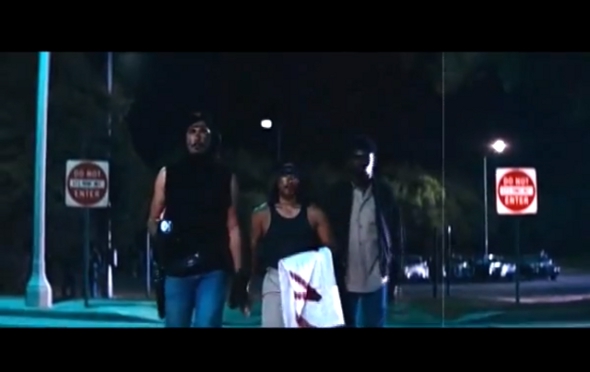 Following a successful launch earlier this year, Giallo Disco return with their second release that has

The Giallo Disco label was conceived after Maiovvi and Greek artist Vercetti Technicolour performed together in Athens last year and discovered a mutual love for the shlocky horror disco music that soundtracked the cult 1970s Italian Giallo cinema of Argento, Fulci et al. It launched in earnest with a split release from the duo entitled The Black Gloves EP which was successfully funded entirely by pre-orders – a rather excellent remix of Vercetti Technicolour’s “L’Incubo Senza Fine” by Danny ‘Legowelt’ Woolfers no doubt helped achieve that goal.

Some months later, the label have revealed details of their second issue which will again use the pre-order model to finance its eventual release at the end of November. The Stockholm Synthdrone EP features three original productions from Maiovvi that stradddle the tempos and styles, with the smacked out, slo mo Carpenter grind of “Prisoner Nightdrive” a highlight – you can indulge in the below video that apes the cult director’s 1970s cinematic classic Assault On Precint 13. Remixes of each track come from Cage & Aviary’s Jamie Paton, “New York Bloodwave pioneer” Mircalla and fellow Giallo Disco overseer Vercetti Technicolour, with Paton’s effort included on the vinyl issue which is limited to 200 copies.

Giallo Disco will release the Stockholm Synthdrone EP by Antoni Maiovvi on November 25 – head here for the various offers relating to its release.