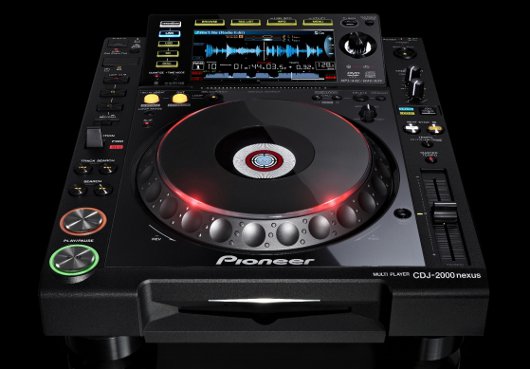 Pioneer have announced an upgrade to their hugely popular CDJ-2000 decks, with the CDJ-2000nexus offering DJs increased connectivity with its rekordbox software.

The new model will make life easier for those DJs who wish to – gulp – perform with the aid of an iPhone, iPod touch or iPad, or Android smartphones and tablets. Music can now be loaded onto the player using WiFi, in addition to the USB connectivity already found on the CDJ-2000. The Pioneer rekordbox software is included in the package – alternatively iPhone or smartphone users can download the app.

With the CDJ-2000s a regular sight at clubs and festivals across the globe, this new model aims to raise the industry standard higher, and Pioneer’s upgrades further negate the need for DJs to beat match tracks, with the four-deck rekordbox Beat Sync function allowing users to automatically sync cued tracks to the master deck. Pioneer say this opens up a “new realm of possibilities” to DJs wishing to spend their time behind the booth getting creative, and brings the CDJs ever closer to the world of laptop DJing.

The new model also includes the Active Loop function alongside the popular Slip Mode; the former allows DJs to create live edits while the latter means you can trigger automatic loops in any track. There are also new Quantize functions which allow cues and loops to be triggered in time with the music, as well as give DJs the option to switch between ‘free’ or ‘quantized’ playback.

The CDJ-2000nexus also offers a system that shows DJs which tracks in their arsenal are in-key with the music being played, and improvements have been made to the Master Tempo function which allows tracks to be sped up without changing pitch. Another alteration from the CDJ-2000 sees the display screen show recordbox functions such as the Wave Display and Wave Zoom functions.

The Pioneer CDJ-2000nexus multiplayer will be released in late September 2012 and will retail at around £1599.