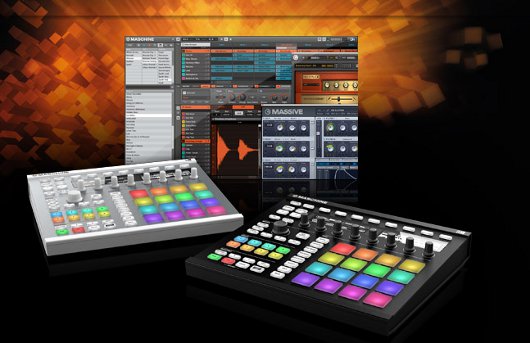 Native Instruments have today unveiled the new generation of its popular Maschine beat production workstation, with updates made to both the hardware and software.

Native Instruments’ popular Maschine range has fast become the go-to beatmaking solution for aspiring producers everywhere, as well as more established names such as Modeselektor, Underworld and Mike Huckaby since its arrival in 2009. Offering an MPC style level of control over samples and rhythms, its native software has been expanded over time to allow use of VSTs from the unit also, taking it closer to removing sequencers like Ableton out of the equation.

The new Maschine 1.8 software looks to take the unit closer to full DAW status with its updates. Offering a system in which sounds, groups, patterns and projects are colour coded, each area is assigned a specific colour scheme which is subsequently reflected by the buttons and pads in use (something used in Traktor’s new remix deck functionality). According to the press release, the new software also includes “offline time stretching and pitch shifting capabilities as well as a range of new effects”, including NI’s own dynamic mixing effect Transient Master. The full version of NI’s Massive synthesizer has also been included in the software update – its 1,300 additional sounds will be available as a download after registration. Cosmetically, little has changed with the units themselves, but the updated backlit multicolored pads offer increased sensitivity, while the Maschine’s display screen has been widened, and a master push-encoder has been added to the surface area along with new click-action buttons.

Customisability would seem to be a key feature of the overhauled range, with Native Instruments taking a leaf out of Apple’s book and offering them in a choice of black or white. A range of official NI custom kits are also being offered, with Maschine users able to purchase interchangeable faceplates and knobs in five color schemes, and a Maschine stand, both of which will retail at 69 euros. Native Instruments have also released a video clip in which percussion don Jeremy Ellis gives the new Maschine a thoroughly dexterous road test:

The new Maschine products will be available from October 1. The Maschine will retail at 599 euros while the Maschine Mikro will cost 349 euros. The custom kits and stand will both go for 69 euros.