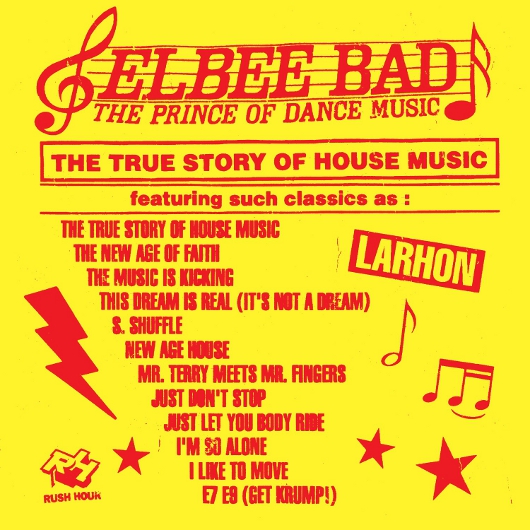 Having already documented the Burrell Brothers story this year, Rush Hour have announced details of another retrospective look at a key figure of the formative New York house music scene in Elbee Bad, the self professed Prince Of Dance Music.

Modern day fans of house music might recognise Elbee Bad from releases on Yore and Compost or collaborations with Gerd, however his production history dates back to the very same period of New York house during which the aforementioned Burrell Brothers came to prominence, yet he remains largely unknown to a wider audience. Rush Hour’s forthcoming compilation, craftily entitled Elbee Bad: The Prince Of Dance Music – The True Story Of House Music looks to correct this, offering an extensive overview of his early output under various aliases from the late 80s and early 90s.

The retrospective arrives nearly a quarter of a century after the producer, real name Lamont Booker and now residing in Berlin, released his first twelve inch L.B. Says under the L.B. Bad name on the independent New York label Bassment. “Just Don’t Stop” from that 1988 release features alongside another early production that most people will recognise under a different name and artist entirely.

“New Age Of Faith” originally featured deep into The True Story Of House Music, Booker’s one release for Nu Groove in 1989 under the Prince Of Dance Music name and – depending on your interpretation – was subsequently the inspiration for/used wholesale on Balearic classic “Smokebelch II” by Sabres Of Paradise. You can hear Booker’s original production below to make up your own mind as to whether the writing credit for “Smokebelch II” was adequate.

The Body Mechanix Authentic Garage Groove version of “The True Story Of House Music” is also included on the 12 track retrospective alongside tracks that originally featured on highly sought-after releases on his own LaRhon label and other small NYC independents such as City Limits, United States Of America and Red Heat, and one unreleased cut from the Elbee Bad archives in “E7 E9 (Get Krump!)”.