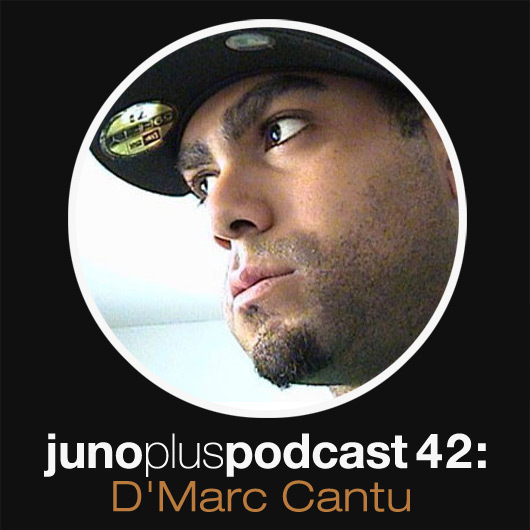 Jakbeat specialist D’Marc Cantu steps up for Juno Plus Podcast 42, turning in a live set recorded at a recent party in his native Ann Arbor, Michigan.

D’Marc Cantu first careered into focus on the Juno Plus radar with gems for the M>O>S Deep and Crème Organization labels such as How Are We Doing?, though his productivity stretches much further back, with a strong foundation of works as part of X2 and 2 AM FM, the projects he undertook with fellow Ann Arbor natives James T. Cotton and Nation boss Melvin Oliphant III. By no means a slouch when it comes to solo productions, the last 12 months have seen D’Marc Cantu emerge from the shadows cast by his more high-profile associates thanks in no small part to two outstanding albums.

First was Fallen, Cantu’s debut LP released by Crème late last year which bristled with an eerie concoction of hypnotic pulses, tumbling drums, muffled voices and splurging, distorted iPhone headphone destroying basslines and came wrapped in that all too distinctive artwork from Mehdi Rouchiche. This primal approach to production was toned down somewhat on A New World, the American producer’s recent album for another Dutch imprint, Delsin, with Juno Plus writer Richard Brophy labelling it “a reflective, introverted work”. His mix for Juno Plus, recorded at a recent party in Michigan, is comprised entirely of unreleased “Detroit club-inspired tracks”, and you can almost feel that basement sweat dripping from the ceiling by the time those beats begin to Jak.

You’ve regularly collaborated with Melvin Oliphant III and Tadd Mullinix on various projects. How did you meet these guys and how did you first get into music production?

I first met Tadd in late 2000 when looking for roommates just after I graduated High School. We had mutual friends and it was kind of an artist’s house that we moved into. There was always something going on musically there. We had my drum kit set up in the basement along with numerous guitars, keyboards and other gear. All of the roommates save for a couple of visual artists were musicians, so it was fun coming home to see who was in the house that day jamming. I had been in several local bands, nothing noteworthy, but started to shift my focus to electronic music after that first year there. Tadd was just finishing up 1/3 when he and I found common ground. I had been messing around with a combination of analog gear, speakers, and a 4 track. Using those items I created several noise tracks and played them for him. We became close friends shortly after and started on what would become 2amfm.

A couple of years later in the summer of 2002 I met Melvin for the first time. He was playing a show in the basement of The Necto, a local club, and I had gone to see him with Tadd. All he told me was that there was this guy who was an amazing DJ and that he would destroy on the decks, which he did. About a year later we started hanging out, he and Tadd were working on stuff together but they wanted to get my perspective. So we got together and the first track we made was “Time Elevation Rhythm”, a monster cut that was on Primitive Cypher. Since then Melvin has launched Nation and continued with the Jakbeat concept we first came up with during our early sessions.

Could you expound on the ethos behind Jakbeat? It’s an attempt to implement the ideas of nascent Chicago house music in a contemporary way right?

Simply put, it’s open to interpretation. For me Jakbeat is merely a means to convey the raw energy that came from music at that time without falling into the black hole that is house music. Now that’s not a slight on the house music scene, only a realization that to me the scene is no longer house. I try to live by the idea that if you put less time in the glitz you tend to focus on the soul of a track and to me that is Jakbeat.

You also have a close and long standing association with Dutch labels such as Crème and M>O>S Recordings, what’s the history behind this link up?

I first got into the Crème circle after playing “No Control” for Melvin. I made that track in 2004 as a template for other ideas I had. It started out as a tribute track for my close friends to play but Melvin heard it and wanted to get it out. He contacted Crème and at the time they were working hand in hand on the Crème Jak series. TLR heard it, loved it and now we’ve got a good thing going.  MOS was similar, an X2 track was released on MOS and later a few 2amfm tracks. Aroy Dee got wind of the work I had done with Crème, Nation and the joint work with X2 and 2amfm. He had asked me if I would be interested in working with MOS and it’s been an amazing experience ever since. I was pleasantly surprised by the interest of both Crème and MOS as they both had a stable of strong talent. Needless to say the Dutch scene is really strong and they are in sync with what I’m about so it’s been fun!

We loved your chat with RA about the importance of comic books in your creative output – what are you reading at the moment?

I just finished the Onslaught saga again; I read most of it in the late 90’s but never finished it. Right now I’m bouncing around in the Ultimate universe, it’s a reimaging of the Marvel universe and features many issues of material so it’s going to take me a while.

This love of comics obviously played some part in the memorable artwork for your 2011 LP Fallen – did you have any creative input on this or did you leave it to the guys at Crème? Can you tell us how important the visual side to your music is?

With Fallen it was Crème that decided on the art work based of the vibe of the tracks. This all worked out perfectly as I was very happy with the finished product. With A New World I had a bit more input on the art direction and thought that the imagery was fitting for the concept around the album. The imagery is just as important to records as with comics, the art sells records as much as the music. As a listener you create your own story but I feel as the artist that it’s my responsibility to insure that the narrative isn’t lost on convoluted imagery. With an album you’re telling a story and anything you can do to help flesh out that story should be done. 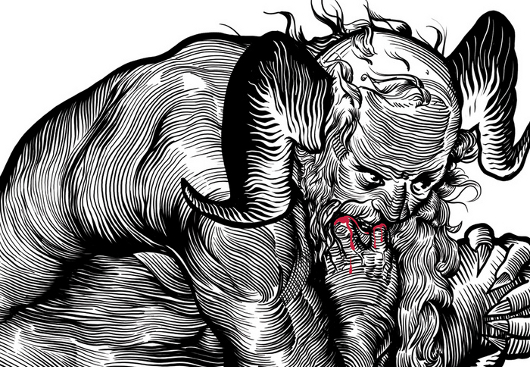 Do you find yourself resisting the temptation to portray yourself as some kind of techno super villain on all your record sleeves?

Haha! I don’t even know how to answer that one… no? Although I will admit the villain is always more interesting than the hero.

You’ve also mentioned how much of an influence horror films are on your musical output, especially in the making of Fallen. Which composers have had the biggest influence on you and how do you bring soundtrack aesthetics to techno? If you could recreate the score for any film, which one would it be and how would you approach it?

I would have to say the most influential film scores would be Lucio Fulci’s Zombi 2 and Altered States. I would also put Begotten in there too. When I make a new track I try to visualize how it would fit into a story. I tend to daydream a lot while creating songs and it allows the track I feel to grow beyond its 5-6 min play time to become a larger concept. Although much of what I do is bound for clubs, I like to think there are a few people out there who also take joy in closing their eyes and letting the song take them on a journey. As far as recreating any film score… If I had the choice it would have to be THX 1138. It fits well with abstract dance music, and still gives a wide berth for less constructed experimental electronic sounds. I would, as I always do, fantasize about the story and try to build a theme that would be the backbone for much of the film.

A New World came out recently via Delsin and we loved it – how did your approach to producing this album differ from your work on Fallen?

With A New World I knew from the get go that it would be more of an album geared toward repeat listening and not necessarily an album for blowing up the dance floor. When working on concepts there was a focus on rediscovery that I felt was integral and I wanted it to have a lightness to it that maybe mirrored its predecessor slightly. Fallen was a monster that I wanted to just ravage everyone who listened. I was heavy handed in the menace in many of those tracks and the whole album was meant for 3am. When people are starting to fade, they’re sweaty, and just worked out, that’s when just about any of those tracks show their true colours.

Can you tell us about your Juno Plus podcast – what equipment did you use in your live recording and what kind of atmosphere were you hoping to create? Do you DJ too or is going to see D’Marc Cantu in a club always going to be a live experience?

The podcast was recorded from a party I played locally here. I was tempted to just make a live set featuring tracks from Fallen and A New World but…. Let me back up for a second and explain what seeing me live entails. I’ve made no attempt to cover up the fact that I use Reason. However it’s an amalgam of software and gear that goes into my production and as a result goes into my sets. So for the Juno Plus podcast I was going to make a set featuring familiar tracks add some variation with gear and call it a day. However, I recorded a set from a party recently and it featured all unreleased DMC Detroit club inspired tracks. Yeah. So it was a no brainer for me to pick that over stuff people have already heard and whose variation would have been minimal. So seeing me in a club will be a new experience, or at least I try to make sure it is. The setup I use requires me to beat match, albeit poorly, despite using gear. But I wouldn’t call it DJing in any capacity.

You are planning a European tour this year, is that right? You must be looking forward to that?

I’m always excited to go over and play for crowds that get way too rowdy! It’s refreshing to be in an environment where everyone has a mutual respect for electronic music beyond its face value. I hope to test out some new music, and see some old friends.

What have you got coming up release wise in the next few months?

Well there are a few projects that I’m keeping hush-hush but what I can tell you is that this spring I’m going to be releasing an album on Nation. I’m very excited for this; it will feature a couple of reworked tracks from early 2002 right up next to some of my most current material. It will be far more risky than my last two albums so if you are one of those people who likes their techno with a side of strange then this will be for you.