DJ and production duo Bicep have become the latest to dip their toes in the waters of record label ownership with the news they’ve established the Feel My Bicep imprint.

Somewhat surprisingly eschewing the move into the gourmet burger judging business predicted by some, the decision to launch their own label can however be seen as a logical progression for the Belfast born but London dwelling duo of Andy Ferguson and Matthew McBriar. Named in honour of the Feel My Bicep site where the duo’s cultivated tastes for all strands of house, disco and techno first became apparent, the label arrives with the duo at their most popular following a number of well received releases and remixes across labels such as Aus, Throne Of Blood, Love Fever, RVNG Intl and Tusk Wax.

The label adheres to a ‘no digital for the time being’ policy and launches with Bicep themselves at the helm onVision Of Love, a 12″ described as being stylistically similar to their hugely popular New Jersey House tribute “$tripper”. with three tracks “deeply inspired by their love of the early US house scene but with a modern twist”. You can get your own idea of what the tracks sound like via the all new Feel My Bicep Records trailer below and Andy and Matthew took some time out to discuss their plans for the label and what else they have up their sleeves over the coming months:

So, Bicep, from where we are sitting it seems like 2012 has been a pretty massive year for you guys. What have been the highlights so far?

Finland last last week was amazing, they had a ‘proper’ setup for playing vinyl which is becoming quite rare these days… great vibe and people dancing to pure underground house! We also went to China for three weeks which was equally amazing. It’s insane out there, great learning curve and had some amazing gigs!

What was the decision behind starting a label now?

The label is really a chance for us to try and build something that’s truly us and while we intend to release various styles, be it techno, house or ambient soundscapes, it will all be one vibe and I think for us it’s important to try and collect everything in one place that you have control over. It’s something we’d always planned to do, now just seems like the right time.

And is it vinyl only? Isn’t this going to rub people up the wrong way?

At present we have don’t have plans for a digital release, although we maybe do something way down the line but I doubt it will involve the original 12″ releases in their current form. I think by limiting a release to vinyl will give the music a longer lifespan, it remains special rather than rinsed in every club all summer and then forgotten about.

Is it purely going to be an outlet for Bicep material or will you be grooming some new fresh talent too?

What was the thinking behind the video?

Fun, 90s, NYC inspired footage that makes you wanna dance, hopefully a good refection of what inspired us to make those particular tracks!

Aside from the debut FMB release – what new music is forthcoming from you this year?

One more EP on FMB before the end of the year is the plan. Can’t go into specifics but have a few big remixes in the works we are stupidly excited about and hopefully another AUS EP (Something much much tougher this time!)

“$tripper”, the 12” you released with Love Fever, has been one of this summer’s dance floor burners – what is your best memory of hearing it played in a club or festival environment?

Nervously playing the test pressing for the first time in our home town Belfast, the crowd went mental as you can see from the video… we couldn’t have hoped for a better reaction to it. There was always a pretty fun moment when we heard it playing in both rooms of Tief at the same time, for any producer that’s a nice feeling and was a real first for us.

The FMB blog seems to be the base from which your burgeoning t-shirt and production empire has spawned – do you find it hard to keep it fresh with so many other commitments these days?

Yea it’s quite hard but we still love it, more and more actually. We have some new t-shirts on the way and we are launching a photo section soon, which will be made up of pictures we take while touring. The blog is great, we’ve only ever had positive feedback and an awesome crew that interact with us online.

You are known burger enthusiasts but the Juno Plus editorial team prides itself on knowing its way around the Meat Liquor and Lucky Chip menus better than most. But we have to ask: where is the best burger joint you’ve ever been to?

Recently I have to say Applepan in LA (thanks to Oli our manager for taking us – 1.5 hour drive), there was much talk over the ‘in-and-out’ but this place nailed it for us. Sloppy, proper 1950’s style hamburgers served by a man in a white paper hat. Your drinks come in a cones too. Yes!

Feel My Bicep will launch with Vision Of Love by Bicep on September 24. 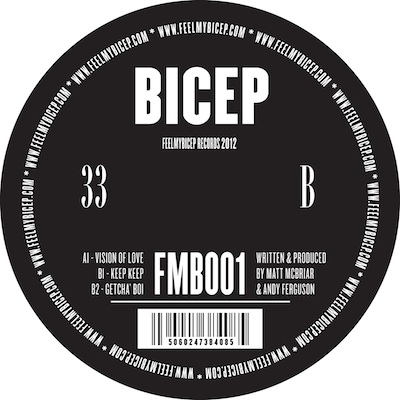