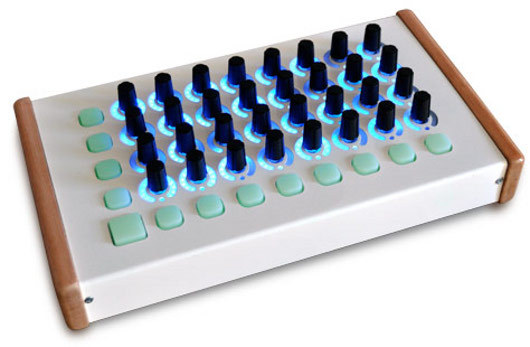 Livid Instruments have announced the second version of their acclaimed Code MIDI controller.

Released last year, the Code was Livid’s most stripped back MIDI controller to date, offering a simple box with 32 encoders with integrated push buttons, offering an alternative for those who wanted to shape their sounds rather than just trigger samples.

The newly announced Code 2 is a refinement of the concept; although still compact, Livid have made the unit slimmer with a smaller footprint, while the LED rings include new functionality meaning they can now not only display values, but also act as loop or VU meter displays, and a “local control” method means the device can now be used as part of a hardware setup independently of a computer with the aid of a DC to USB power jack. This is all rounded off with a new editor program, and four editable onboard presets that effectively quadruple the size of the unit.

The Livid Instruments Code 2 is out later this month, for full specifications visit their website.