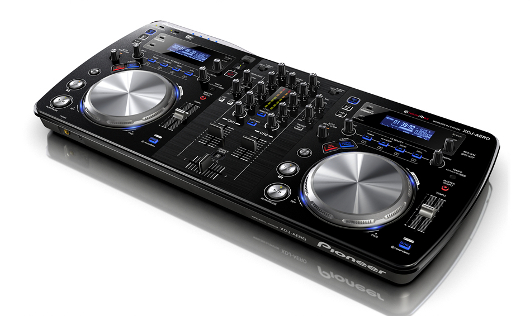 Pioneer have just announced details of the latest addition to their family of DJ controllers, the Wi-Fi enabled XDJ-AERO.

Although a significant portion of the Juno Plus team are still proud vinyl-based luddites when it comes to the art of DJing, we also understand fully the difficulties involved with laptop based performance, be it the mass of wires involved in connecting the computer via a soundcard or the ever present risk of someone spilling a pint over your brand new retina MacBook Pro. Pioneer have come up with a controller that should at least address some of those issues in the shape of the XDJ-AERO.

Aesthetically similar to their popular DDJ-ERGO controller, it nevertheless allows DJs to load music wirelessly from their smartphones, tablets, laptop or PC, removing the need for cable connections, as well as functioning as a standalone mixer which can also be used as a MIDI and HID controller. By creating its own private Wi-Fi network, it allows DJs to connect to up to four wireless devices at once, meaning that theoretically the audience can send tracks from their own smartphones or tablets. Yes, you read that right.

It also works seamlessly with Pioneer’s rekordbox music management software, allowing full interaction with the software’s features and functions, including the creation and editing of playlists on the fly, viewing of beat grids; analysis of BPM and the loading of wave forms during a set. Anyone as confused as we are about how such arcane sorcery can possibly function can get a feel for how the unit works in the video below, while full specifications can be found at the Pioneer website.

The Pioneer XDJ-AERO will be released in August at a suggested retail price of £869.