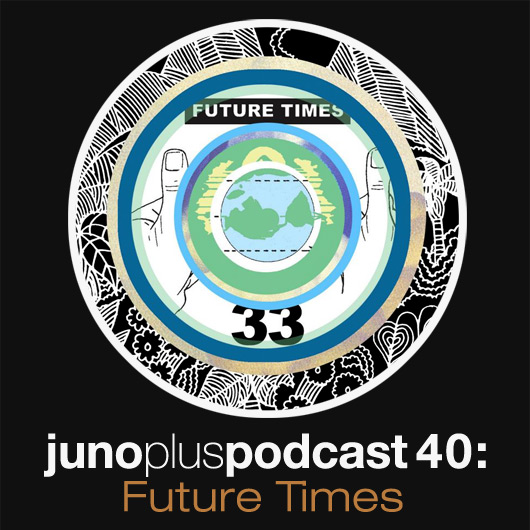 Future Times step up for the 40th selection in our podcast series!

We’re super psyched to get a mix from Mike Petillo and Andrew Field-Pickering, the duo that oversee the DC based label, as everything they touch invariably ends up in our collective record boxes these days. Both are supreme crate diggers and DJs and operate on a highly respected music plane, Petillo as one half of Protect U and Field-Pickering as Maxmillion Dunbar and 50 per cent of Beautiful Swimmers, with both spreading their music across a killer range of labels including Planet Mu, Ramp, Live At Robert Johnson, LIES and more.

Proud owners of one of the most lo-fi corners of the internet, Future Times have craftily grown into one of the most dependable and danceable outlets for boogie fried, retro futurist house, with last year’s double vinyl Vibe 2 compilation a real statement of intent. Calling on a cast of talented friends such as Hunee, JuJu & Jordash, Steve Moore, Tom Noble, Alexis Le Tan and Jason Letkiewicz, Vibe 2 was quite rightly summed up as “a release that happily twists and turns through all manner of carefree experimentalism without any compromise on quality” in our review last year.

The duo currently have the Atlantic between them, with Field-Pickering on a little European Beautiful Swimmers tour, but that didn’t halt them from answering a bunch of questions for us. Read on and enjoy a killer 45 minute selection from two of the best.

What up Andrew and Mike, what’s new in Future Times world right now?

Mike: Yo! We put out the latest Max D single with the Terekke mix on it a few months ago, and we’ve got a two-track Steve Moore twelve-inch about to drop in September hopefully. We’re planning an upcoming record by Huerco S., a really cool producer from Kansas City who makes some twisted, tough-as-hell house.  Beautiful Swimmers are doing their masterpiece LP and doing the final mixdowns of all their new tracks so we’re going to have that out as soon as we can.  It’s pretty crazy, unsurprisingly.  Somewhere in there we’re also doing a record by DJ Sotofett from Norway/ Sex Tags crew.  He did some new versions of Slava and Max D tracks which are pretty wild, and we’re really pumped to work with him as we really like the Sex Tags stuff.

From the outside looking in there seems to be a healthy undercurrent of labels scattered across the US right now – what’s the view from DC like?

Mike: Obviously if there is a bunch of activity and lots of people doing their thing that is naturally great. I have to imagine that many people out there getting some attention have been busy for a while, building and maintaining their own little universes, and perhaps now, a lot of them are thankfully getting their records and music out there and thus have been creating some discussion.  But obviously none of this happens overnight and it still takes a shit ton of energy to run a label.  And there are probably so many things bubbling right now, can’t see what starts to pop.

Andrew, Ron Morelli told us last year you were instrumental in pushing him to start LIES, do you ever step back and think “jeez look at this monster I’ve created”?

Andrew:  Haha, well yes but in that good way. “Created” is giving me way too much credit. Ron was always sitting on a strong vibe and has always been a good dude out to lay it down. It was about time. I love LIES and all the releases. So sick. If I helped in any way by badgering Ron that makes me happy.

Mike: That stuff isn’t on our radar really. It’s cool to deconstruct and try and pick apart how culturally some art forms get distorted in ways that definitely seem really weird to other people.  And yeah that term does kind of seem appropriate when you look at just some of the imagery and gimmicks and stuff that are like, the equivalent of some new Mountain Dew billboard with like two bros with frosted tips hang-gliding over some beach and squirting soda on women in bikinis or some shit. It’s good that people get academic and get deep with trying to figure it all out in their heads.  I’d rather listen to records than spend a lot of time sweating it though, personally.

Future Times as a label put out the first release four years ago this month right? What’s been your proudest moment to date?

Mike: Playing at this big summer party in New York at the MoMA gallery called PS1 last year was pretty fun.  Thousands of people in the best weather just really having a good time.  Still hearing anyone play our tracks out in clubs (or in their living rooms) makes me pumped and helps to revitalize. And yeah, just even getting a chance to travel around, especially to other countries, and being able to play our own stuff or our favourite music in the world to other people.  I mean, that’s obviously special as fuck.

The Vibe 2 compilation last year was a big statement for the label, how much planning went into it?

Andrew: It fell into place so perfectly actually. We sent out a beacon for tracks to the crew and everyone’s first track was strong. It was awesome doing a big project like that and have it come out so well. All the planning we had to do was ask great producers for great tracks.

How do you plan to top it with the (hopefully speculative) Vibe 3?

Mike: Don’t know if we’ve gotten that far yet. Probably not too long before we got stuff for another comp. There are lots of tracks floating around.

So this mix you’ve kindly done for us includes a track from the forthcoming Beautiful Swimmers LP – is that coming out on Future Times?

We hear whispers of a Max D LP for RVNG too?

Andrew: Yeah. The House of Woo is my next full length, dropping with the excellent help of Matt and RVNG. Getting a 12″ prepared for one of the tracks, then we start mastering and all that. Super psyched to share this one with people!

Mike your Protect U project’s had a pretty healthy year so far, with excellent releases on Planet Mu and Vibrations – any particular reason for this UK centric focus for your music?

Mike: Thanks for the kind words! In terms of the UK connection, it just worked out that way. Planet Mu hit us up a while ago, after we put our first record, and we connected then. We stayed in touch until we had the right tracks done up. And Piers from Vibrations is a friend of ours from a few years back when we met him at a friends’ party in Philly.  Protect-U was asked to do a remix for the Asian Project record and then Piers wanted us to do our own EP.  We love the way they approach their releases, “like a house label the way that On U-Sound did reggae” (their own words).  Working with both entities has been real fun.

You guys are more prolific than most when it comes to DJing, posting mixes online etc. How did you both get into DJing and who do you consider your main influences in this art form?

Mike: I’ve always been into records, and I think obviously you need something to do with these things you found, haha.  My dad was really into disco and club stuff ever since I was a kid, he’s got hours of mix tapes he recorded off of Philadelphia radio stations.  I’ve always had a natural love for dance music.  In terms of inspiration,  I think my friends have helped out the most. We’re always sharing new music with one another.

You both seem like true crate diggers – what was the most recent dusty gem you picked up and where did you get it?

Mike: Ari G and I went to Philly a little ways ago and got really good stuff from our buddy up there.  Also I finally tracked down a copy of the Kevin Harrison LP recently, which I’ve been hunting for a while.

What other labels do you guys feel are doing it right at the moment?

Andrew: I feel like the US crew is really holding it down, of course LIES, FIT, The Pittsburgh crew, Wild Oats, Sound Signature. I’m also feeling Power House big time, Vibrations, Funkineven’s Apron stuff, Sex Tags and all the sub labels, Dekmantel, Indische Burrt is off to a sick start, Rush Hour. The list goes on!

You guys hold down a monthly residency in DC called The Whale right? How long has that been going for?

Andrew: it’s more sporadic right now, partly because Swimmers travels a lot, but yea its been going a little more than two years. The next one is August 22 with Andrew Morgan, the godfather of PPU.

What’s the story behind the name?

Andrew:  Things will be better in Future Times.

Are there any other clubs on your adventures in Europe that replicate the vibe you’ve established at The Whale?

Andrew: Europe goes late and goes hard and we always love that. The vibe at the Whale is special, but parties in the rest of the world are just a different kind of awesome.