Young Smoke travels to the Space Zone for Planet Mu Planet Mu continues its mission to give the high paced, jagged rhythms of juke a global stage, following its recent Traxman album with a debut set from 18-year-old producer Young Smoke.

Whereas Traxman’s Da Mind of Traxman was the work of a veteran producer whose career dates back to the halcyon days of Chicago House and juke in its earliest form, Space Zone is the work of a new talent in Chicago-based teenager David Davis.

The album contains the usual frameworks of a juke release – bass heavy rhythms pitched to a heady 160bpm – albeit laced with a conceptual approach that focuses on themes of space. Intriguingly, a press release links the album (“a techno-like atmosphere of bleeps, effects and swirling chords and his melodic lightness of touch”) to the work of legendary Detroit outfit Drexciya and early drum and bass. The press notes also suggest that Davis is not afraid of carving overt melodies into his tracks, which suggests the album, like  Da Mind of Traxman before it, will be accessible to those who may find the more raw end of juke a bit hard to digest.

Space Zone marks yet another chapter in Planet Mu’s ongoing love affair with the genre, which has seen two compilations (Bangs & Works Vol.1 & 2), as well as releases from juke progenitors Traxman, DJ Rashad, DJ Roc and Nate alongside those clearly influenced by the genre such as Machinedrum. 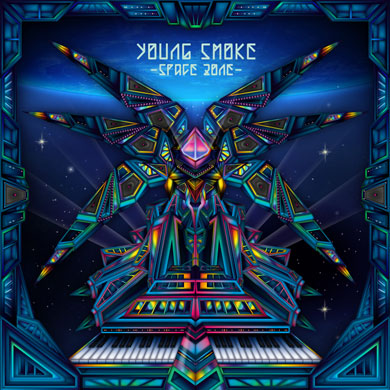