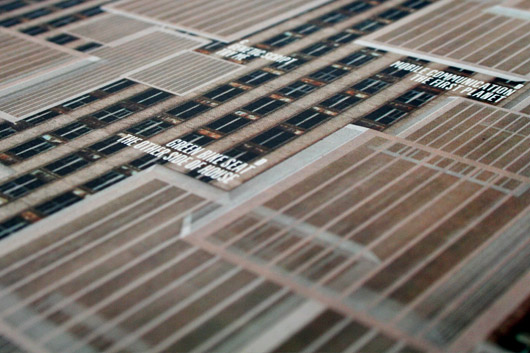 If you’ve been following the production trajectory of Theo Parrish over the past six months then you’ll have become accustomed to expect some outlandish, unpredictable releases from the Sound Signature main man. Still though, few would have seen this coming. Central to the DNA of “Any Other Styles” is a cornucopia of FX dredged up from arcade beat-em up moves and crudely nudged to fit an abstractive, thick set beat pattern that bucks angrily with a frenetic nature that’s beyond unpredictable. It’s the strangest Theo record we’ve heard in some time, but when any number of people are treading shallow waters in the name of contemporary deep house, don’t we need some people to not even consider “the box” when it comes to approaching music?

Another label that share that same sense of experimentation are our favourite Catalonian imprint, Hivern Discs who brought the talents of Aster to the table with Danza, featuring three original tracks (and a fine remix from Planet Mu’s Ital) that demonstrate the type of production idiosyncrasies that make them worthy additions to the Hivern family. On the opening track “Assis” for example, Aster playfully draws out hazy detuned synth tones and monk like chanting over vaguely militaristic beat patterns, whilst “Lamento Castellano” hints at their Mathematics past with thick globules of malfunctioning machine funk pulsing away over freeform drums.

Also causing ripples of excitement through some corners of the Juno office was the arrival of represses of No Symbols 001 and 002, from hotly-tipped UK producer Beneath. With a ruthlessly stark sound design, it’s difficult to categorise this in any other way but ‘heavy’. Four-to-the-floor beats, early dubstep darkness, UK-funky swing, techno-flavoured minimalism, it’s all in the melting pot, and it’s well worth investigating – especially if you weren’t lucky enough to get your hands on them first time around. Coming a close second in the expectation stakes was the first release on Livity Sound sister label Ytivil Dnous, from rising techno producer Alex Coulton in the shape of “Bounce”. A ripe slice of broken techno with a sly nod to Skull Disco percussion, you can see why Pev and co elected to found a new label in order to secure it. The Punch Drunk boss turns in a remix on the flip which cranks up the pressure markedly. Similarly dark in tone was our album of the week, D’Marc Cantu’s A New World. The second artist album in as many years from the producer shows that he should be viewed as being the master of his own destiny rather than an engaging sideshow to more high-profile associates Traxx and James T. Cotton – read Richard Brophy’s review for the full details.

Meanwhile in the Bass diaspora Canadian wunderkind Jacques Greene turned up on Martyn’s 3024 with the Ready EP.  Martyn always seems to be able to get the kind of material from artists for 3024 that goes outside their established comfort zone – see Mosca’s Wavey EP for proof of that – and this EP from Jacques Greene is no exception. Eschewing his usual combination of futuristic R&B and 2-step, “Ready” is techno in the way that only Greene could do it – lightly shuffling garage beats and gentle vocal samples abound at the beginning, but are soon bulldozed aside by hammering kicks and cascading arpeggios. “Prism” is, melodically at least, what we’d expect from the Canadian; with glittering sequences streaming over its hollow kicks, but the dark house vibe underneath is one we haven’t seen from him since “(Baby I Don’t Know) What You Want”. Meanwhile French Fries turned up on ClekClekBoom with two bass-heavy edits that have been causing certain sections of the internet to lose their ish for some time now. On the A Side Thomas Bangalter’s Roule classic “What To Do” gets rewired with that trademark Clek Clek Boom rudeness, sounding not dissimilar to a DJ Technics edit, all percolating low end and face slapping drum claps. On the flip, Amerie’s much edited “One Thing” gets eased out into a swaggering  and heavily pressurised rhythm that doesn’t sound dissimilar to your man Blakey’s work as Harmonimix.

Of course the vinyl highlights were too numerous to mention – with strong offerings from Ossie on 20:20 Vision, Meandyou residents Juniper and Arnaldo’s excellent four tracker We Met In Manchester on Smallville, Floating Points’ remix of The Invisible and Gatekeeper’s new album for Hippos In Tanks all ringing in our ears this week.

In the binary world of Juno Download this week, London’s Night Slugs came through again after last week’s Lil Silva EP. After the success of the original Southside EP last year, Bok Bok has called upon his mates to rework some of the lead cuts with results that stretch across the board, with impressive results from Sir Spyro, Vjuan Allure, L-Vis 1990 and Bokkers himself. Our pick though is Helix’s 10 minute take on “Look”, an electroid techno banger of the highest order. Track of the week meanwhile comes from Unknown To The Unknown, whose “DaAutopsy” YouTube channel seems to have taken on a life of its own and spewed forth “Tear Tha Fuckin’ Club Up!”. Undoubtedly the hardest hitting UTTU joint to date, incandescent rave stabs go toe to toe with Baltimore club styles, creating a beast of a club track that resembles a Frankenstein’s monster of the YouTube generation. Compilation of the week meanwhile was Bicep’s curation of some of the Throne of Blood catalogue to date. Having seriously upped the ante with their release schedule in the past twelve months, now seems as good a time as any to take stock of where Throne Of Blood have got to with their unique slant on analogue dance music. Taking the warmth and rounded edges of vintage Hague electro and imbuing it with a slightly trancey disposition, their sizable roster (including Beat Pharmacy, John Selway and Populette) sound strong and cohesive together in the hands of Bicep. The Belfast boys weigh in with two tracks of their own machine-led jams, and a beatless version of their “Darwin” smasher.

Finally if all you want this week is a shiny compact disc, the excellent Downwards compilation So Click Heels arrived featuring a selection of tracks that have previously been released on the label’s DO series along with some unreleased material, and also introduces some new Downwards signings.